A Double Nonet + A Trio With 4 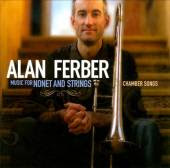 Chamber Songs/Music for Nonet and Strings - Alan Ferber (Sunnyside) - The number "9" is quite germane to this excellent new release from trombonist/composer Ferber.  He utilizes his fine nonet and adds a 9-piece string section, conducted by J.C. Sanford, to the majority of the 9 tracks.  Numerology aside, this CD continues the onslaught of impressive large ensemble recordings that have been issued n the past 18 months.  Blending strings with a jazz ensemble often has a pasted-on feel but Ferber, in his role as arranger, really pays attention to how the sonorities mesh throughout.  Opening with a lovely arrangement of Keith Jarrett's "The River" (originally played by his Trio with Jack DeJohnette and Gary Peacock), the music has the feel of an Aaron Copland work, the openness, solemnity and grace that was a hallmark of that composer's more "popular" works. That leads directly into "Interlude", an original that shares the melody among Bryn Robert's piano and the 5-man horn section.  "Paradox", composed by nonet member Jon Gordon (alto and soprano saxophones), features a lively rhythm supplied by Mark Ferber (drums) and underpinned by bassist Matt Clohesy. Gordon gets the long solo and then there's a lively gove-and-take with Gordon, trumpeter Scott Wendholt, guitarist Nate Radley, trombonist Ferber and violinist Zach Brock.  Drummer Ferber (yes, they are brothers) delivers an sprightly and muscular solo before the piece moves to its exciting finish.  The work of John Ellis (tenor saxophone) and Doug Yates (bass clarinet) is impressive throughout, especially in their ensemble work on "Ice Caves" - Yates gets to let fly on "Union Blues" while Ellis creates a fine, multi-layered statement on "Sedona."  The CD closes with Ferber's imaginative arrangement of guitarist Ben Monder's "In Memoriam" (a piece originally written for solo guitar)  Like "The River", the work is played sans rhythm section (including no piano or guitar).  The music has wonderful textures, the lower horns moving in and through the glimmering string work, and a long melody line.

The music on "Chamber Songs" satisfies  the curious mind, with songs that go in many directions, sectional writing that is free of cliches and many fine melodic lines.  Not unlike the writing of Bob Brookmeyer (yet not sounding like Brookmeyer at all), the various voices that comprise the nonet are clearly heard and all have something to say.  File under "wondrous", this is music that sticks in your memory.  For more information, go to www.alanferber.com. 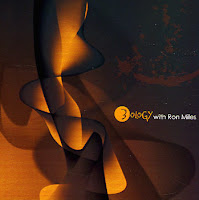 (Self-Titled) - 3ology with Ron Miles (Tapestry) - This group, based in Colorado, is a trio with a full-throated sound.  Bassist Tim Carmichael is way "up in the mix" which is fine because he's a good player. His brother Doug plays tenor saxophone and drummer Jon Powers is quite forceful.  Add to the mix the strong cornet work of Ron Miles and this disk, the third for the group and first for the Tapestry label, is worth your time.  The very short opening track (:20 seconds) is titled "All Miles" and is just that - a bluesy trumpet coda that leads directly into "Gonna Leave a Mark", a "slow drag" with booming bass and mournful horns. The bass lines weave in and around the quiet tenor solo while, for his solo, Miles pushes the pace and the volume upwards. There's a bit more heat in the funky "Back in Hotchitakee" with its short, terse, 3-note line that takes over the middle of the song - the cornet and tenor push and pull at the notes until Miles takes an unaccompanied solo that sounds influenced by Lester Bowie.  The rhythm section returns with the 3-note run and the piece rushes to its eventual climax and strangely soft finish. "Flight of the Neo-cerebral Peace Iguana" (who says they don't write them like that used to) features brother Tim on electric bass, with popping notes, yet the piece is a sensuous, slippery, tune not unlike late 70s/early 80s Weather Report. It's just cornet, handclaps and percussion on "For Don", a piece that blends African, Caribbean and South American influences and is (probably) dedicated to Don Cherry.  Miles has such a clear, rich, tone on his horn - he fills the sound spectrum yet never dominates. "Aw Dude" is raw funk, rollicking drum work and roiling electric bass, with a understated yet tenor work and fiery solo from Miles.  Doug Carmichael cuts loose in the closing section, sparring with the cornet while the rhythm section continues to "kick hard."  The program close with "Zero Miles" (correct - no cornet), a slower piece with rich tenor tones and more fine acoustic bass.

3ology make music that smolders, with a "deep blues" feel yet rife with jazz sensibilities.  The addition of Ron Miles actually frees brother Doug to play more sparingly, abstractly and with good dynamic variety.  Brother Tim is quite the creative bassist (melodic, supportive, and propulsive) and works wel with Powers to give the music its depth.  To find out more, go to www.facebook.com/pages/3ology/23364870240.
Posted by Richard B. Kamins at 9:25 PM