At the risk of sounding like a broken record (explain that to your children), The Side Door Jazz Club goes from strength to strength.  This weekend, 2 great pianists and their ensembles will brighten the Shoreline nights.  On Friday (4/15), pianist and composer Renee Rosnes will play at the Old Lyme venue. Hot on the heels of her new CD, "Written In the Rocks" (Smoke Sessions), arguably the finest album of her career (which is now in its third decade), the pianist will bring 2 of the musicians from the recording, vibraphonist Steve Nelson and bassist Peter Washington as well as the wonderful drummer Lewis Nash. 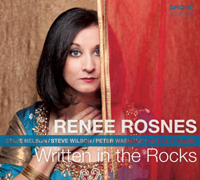 The CD, (pictured left) which also features reed master Steve Wilson and drummer Bill Stewart, sounds contemporary and timeless.  Ms. Rosnes' "The Galapagos Suite" makes up the bulk of the program; it's an ode to evolution and the natural sciences.  Her compositions all have strong melodic lines yet leave plenty of room for great improvisations.  The songs have power while the interactions of the musicians, especially the rhythm section, are often riveting, each person a storyteller. Here's the opening line from a review by WBGO-FM's Gary Walker - "If I wanted to be a great writer, I would make a deal with the devil to be able to tell a story the way Renee Rosnes does when she sits at the piano." No argument here. 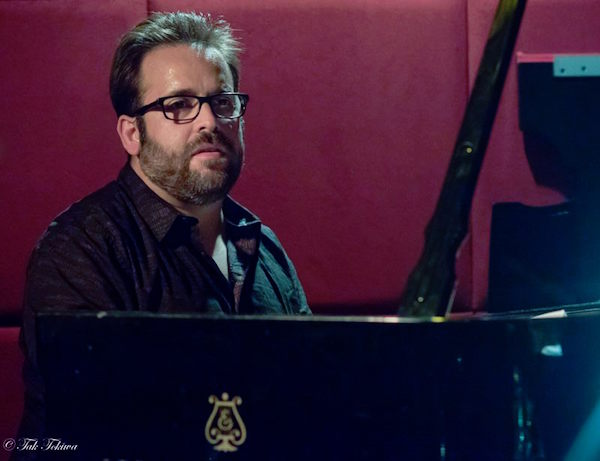 On Saturday night, Jan and Ken welcome pianist and composer Manuel Valera.  He's played the venue before with the New Cuban Express but, this time, the Cuban-born Valera brings the rhythm section of Ben Street (bass) and the delightful drummer Clarence Penn (a true master of "groove" who blends power and subtlety like few of his contemporaries).  Valera's last Trio album was recorded in 2014 at New Haven's Firehouse 12  (watch the video below) and features EJ Strickland (drums) and Hans Glawischnig (bass).  I love how the pianist lets loose in the Trio setting and, with such empathetic colleagues, the music really goes many different ways while maintaining the rhythmic excitement.

The Manuel Valera Trio hits The Side Door stage at 8:30 p.m. For tickets and more information, go to thesidedoorjazz.com.  To learn more about the pianist and his career, go to www.manuelvalera.com.

Firehouse 12 in New Haven welcomes drummer and composer Ari Hoenig & Trio on Friday (4/15).  Joining him will be pianist Nitai Hershkovits and drummer Or Bareket, both natives of Israel and both busy as sidemen and as leaders.  Neither musician is on Hoenig's latest (and self-released) CD, "The Pauper and the Magician" but have worked with the drummer in the past.  Hoeing is quite an expressive and expansive player yet never gets in the way of fellow musicians. As a composer, he writes pieces that grow organically from both the rhythm and the melody, leaving plenty of room for improvisations and interactions. Tenor saxophonist and composer Kirk MacDonald is a veteran of the Canadian jazz scene (yes, there is a busy scene up North) where he's been involved ensembles big and small for the past three decades.  "Symmetry" (Addo Records) is a release from late 2013 that just seeing the light of day in the US and finds the saxophonist in the company of pianist Brian Dickinson, bassist Neil Swainson, and drummer Dennis Mackrel plus guest Tom Harrell (trumpet and flugelhorn. All the tracks come from the pen of the leader. The ten tracks cover over 76 minutes leaving plenty of time for lengthy, but never boring, solos.  This is also Mackrel's first time recording with MacDonald and he displays his formidable talent throughout, teaming up with Swainson and Dickinson to keep the music flowing beneath the front line.  The appropriately named "Mackrel's Groove" is a spotlight for how well he can drive a band - his interactions with the leader near the close of the tracks explodes out of the speakers.  Harrell shines throughout as well. His delicate flugelhorn lines on "Shadows" are lyrical while he takes a rollicking solo on "Bop Zone."  The leader swings lustily on many of his solos, displaying a style that is built off the foundations of Sonny Rollins (and I hear both John Coltrane and Chris Potter in some of his phrases as well).

Kirk MacDonald is a busy musician and educator (he has been on the faculties of McGill University and University of Toronto - he now is a full time Professor at Humber College in Toronto, CA) with a resumé that speaks to his versatility as a player and community member.  "Symmetry" is a lively collection of songs that, despite its length, eschews cliches and trite phrases which displaying the power of working together and a love for what you do.  For more information, go to kirkmacdonald.com.

Pianist Steve Kuhn (born 3/24/1938) has been active on the contemporary music scene since the mid-1960s. While at Harvard, he worked with Chet Baker and Coleman Hawkins. Kuhn then  played in John Coltrane's Quartet right before McCoy Tyner, recorded a series of fine albums for both ECM (including several with vocalist Sheila Jordan) and Concord Jazz in the 70s and 80s (returning to Manfred Eicher's label in the 2000s) and has a number of CDs on the Japanese Venus label.  In 2012, ECM released "Wisteria", a studio album with electric bassist Steve Swallow and drummer Joey Baron.


"At This Time" find the trio of Kuhn, Swallow, and Baron on the Sunnyside label.  The hour-long program (7 standards and 2 Kuhn originals), recorded in August of 2015, is quite enjoyable. The pianist and bassist have a long association, know how to work together to support each other as well as provide freedom of expression.  Add Baron to the mix and this recording really sparkles.  The Trio really swings on several tracks including the opener, "My Shining Hour" and on Kurt Weill's "This Is New" (from the 1941 musical "Lady In the Dark"). Swallow's thick electric tone and Baron's splendid cymbal work give Kuhn a fine cushion and he plays with abandon on both tracks, really digging into his solos.  Among the ballads, Quincy Jones' (Theme from) "The Pawnbroker" stand out for its lyricism and the Latin groove under the piano solo. Kuhn's composition "The Feeling Within" is a handsome solo piano performance that one easily gets lost in.  The trio takes a gentle, wistful, and bluesy stroll through Leonard Bernstein's "Lonely Town"  (from "On the Town") and close the album with a sweet take of Gil Fuller's "I Waited For You."

At 78, Steve Kuhn continues to perform at the height of his talents as does Steve Swallow (75 years old).  If you decide to just let "At This Time" play in the background, it's delightful; if you sit and pay attention, the interactions really jump out as do the melodies.  Also, listen to how expansive Joey Baron (the young one at 60) plays on the uptempo tracks and his sweet brush work on several of the ballads (especially on "Carousel" from the British composer Duncan Lamont). As I have noted many times, there are plenty of piano trio recordings available on the market; there are few as enjoyable as this new disk from Steve Kuhn.

For more information, go to stevekuhnmusic.com.

Here's this delightful trio in action from 2014: