Leading From the Rhythm Section 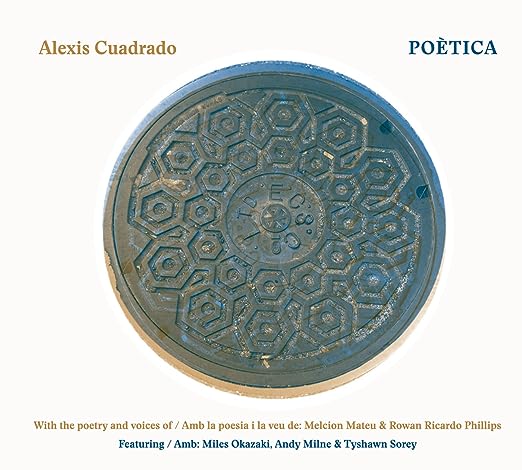 Bassist, composer, arranger, and educator Alexis Cuadrado creates such fascinating music.  On his previous 2 albums, he has explored the fusion of flamenco music with jazz (2011's "Noneto Ibérico") and the poetry of Federico Garcia Lorca, specifically the poetry he wrote during his visit to the United States in 1928-29 (2013's "A Lorca Soundscape").  Now the native of Barcelona turns his attention to the 21st Century writings of Melcion Mateu (also a native of Barcelona) and Rowan Ricardo Phillips (a NYC native fluent in Catalan); both are featured on "Poètica" (Sunnyside Records) alongside Cuadrado, Miles Okazaki (guitars), Andy Milne (piano, keyboards) and Tyshawn Sorey (drums) on a program that challenges, soothes, and provokes many emotions.

The album contains thirteen tracks with 3 dedicated to the 3-part "Balada de Matt Sweeney" (Mateu) and 4 cuts with multiple poems.  Opening with with Phillips "Song of Fulton and Gold" and its evocation of 9/11, the power of the collaboration is immediately evident.  The leader leads the band in with his insistent cajón, then the powerful rhythms created by the bass, guitar, and drums push the piece forward through the lyrics to a shattering finish.  "Terra Incognita" (Phillips) also contains that powerful forward motion, with Sorey's forceful drums, Okazaki's roaring guitar lines, Milne's hypnotic piano chords and the leader's fundamental bass work.


Throughout the album, the combination of the melodies and words are often filled with tension, the different stories being told capturing one's attention.  "..Matt Sweeney" (Mateu) spreads over nearly 13 minutes with different rhythms, several solos, and the poet's voice, sometimes dripping with sarcasm, sometimes anger, even with genuine wonder, with "Pt III" sung in both Spanish and English.  Mateu's gravely intro to "What Rose Is/Pamelia/ Cornelia St Café" sets the tone for the impressionistic images of a man fascinated with an older woman.  In the middle of the piece, there's a long and powerful guitar solo.

The hypnotic melodies, the circular poems, the amazing interaction of voice and musicians, the multitude of sounds from the guitars of Miles Okazaki and keyboards of Andy Milne, the percussion barrage of Tyshawn Sorey, the two different narrators with their poems of the ever-shifting New York City, landscapes (physical and emotional), all that plus the arrangements by composer Alexis Cuadrado make this new project spring to life. The more you listen, the more you can hear how the different come together and complement each other.  Part recital, part "poetry slam", often exciting, and always involving, "Poètica" shines.

For more information, go to alexiscuadrado.com.

Here's the ensemble in action from 2014, with both Rowan Ricardo Phillips and Melcion Mateu involved: 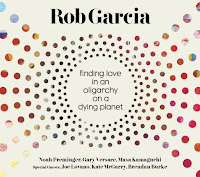 Since 2009, drummer, composer, and arranger Rob Garcia has led a most interesting quartet based around tenor saxophonist Noah Preminger, pianist Dan Tepfer, and a rotation of bass players (Joe Martin, John Hébert, and Chris Lightcap).  For his 4th album for BJU Records, "Finding Love in an Oligarchy on a Dying Planet", Garcia turns his attention to issues that affect our daily lives, doing so with a stellar band including Preminger, bassist Masa Kamaguchi, and pianist Gary Versace plus tenor saxophonist Joe Lovano (3 tracks), vocalist Kate McGarry (2 tracks), and actor Brendan Burke (spoken word on 1 track).

Garcia's compositions take on such topics as gun control ("Guns Make Killing Easy"), global climate change ("Greenland Is Turning Green"), the current politic climate ("Terror, Fear, and Media"), and wars ("Johnny Has Gone for a Soldier"), doing so in the manner of Charles Mingus and Sonny Rollins; the titles make you think while the music pulls you in.  "Greenland.." features both Lovano and Preminger on tenor sax playing the theme in harmony, each going on into strong solos.  Ms. McGarry joins the band (minus Preminger but plus Lovano) for "The Journey is The Destination", a swinging reminder of the arc of one's life.  She also teaches about the importance of equality on "People Are Everything", this time with Preminger winding his soft tenor lines around the lyrics.

The title track jumps atop the circular piano ones, throbbing bass and forceful drums plus the lyrical tenor sax of Preminger. Since he first came on the scene, the young saxophonist has been an impressive voice and now has a blues sensibility to his phrasing (not unlike Don Byas or Archie Sheep).  After a long bass solo, the saxophonist plays the plaintive melody of "Guns..." shadowed by the more colorful piano counterpoint.  There is a similar setup on "Johnny...." with a strong bass intro (melody and more) from Kamaguchi before Preminger play the folk-like melody.

"Finding Love in an Oligarchy on a Dying Planet" (a message of hope on its own) charts the continuation of Rob Garcia as a  composer, arranger, bandleader, and human being.  Using music and his ensemble to help him make sense of the world as well as give his listeners the opportunity to find where they fit in this program makes this a fascinating program. The music stands out, is forceful yet never strident, and is contemporary with an understanding of its myriad roots.  No matter your politics, this music soars, flows, and sings.

For more information, go to www.robgarciamusic.com. 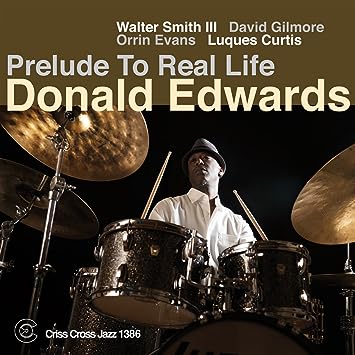 One look at the discography of drummer and composer Donald Edwards and you see that the Louisiana native is a busy and versatile musician. He's worked and recorded with guitarist Mark Whitfield, saxophonist Wayne Escoffery, the Mingus Big Band and Orchestra, bassist Ben Wolfe, trombonist Conrad Herwig, trumpeter Alex Sipiagin, pianist Orrin Evans, and others plus he's a charter member of Opus 5.

"Prelude To Real Life" is his 4th album as a leader and 2nd for the Criss Cross label.  Three of the musicians who played on 2014's "Evolution of an Influenced Mind" return - Orrin Evans (piano), Walter Smith III (tenor sax), and David Gilmore (guitar) - and are joined by bassist Luques Curtis plus guests Nicholas Payton (keyboards on three tracks), Vivian Sessoms (vocalist on three tracks) and Antoine Drye (trumpet on one track).

The program includes three short "sound sculptures" including the album opener "Taking Shape." Each features Payton on either Fender Rhodes, organ and/or piano.  "Hop Scotch" is a funky ditty with Ms. Sessoms singing the instructions for a children's game. "King" blends keys, drums, and saxophone into a quick, raucous, hit.

The majority of the material utilizes the quintet to excellent advantage.  There are 2 standards in the program, the understated but swinging rendition of Benny Golson's "Stablemates", the melody played by Gilmore and Smith III with the rhythm section dancing beneath them. Curtis, a native of Hartford, CT, takes a sweetly melodic solo before Evans, Gilmore, and the tenor saxophonist play succinct spots, all the while the leader moves deftly around his kit. A short group of solos from piano, drums and tenor sax leads the ensemble into a playful take on Thelonious Monk's "Skippy" (which is a good description of Edwards' accompaniment.) Ms. Sessoms adds her whispery yet articulate voice to Alex Sipiagin's "Way To Her", shadowed by the saxophone with counterpoint from Gilmore's vocal-like guitar phrases.  She returns for the drummer's "Thought For the Day" with lyrics that touch on the various ills in society, taking a positive approach.  The ensemble kicks it up several notches with the rhythm section leading the way during the fine solos (Smith III really pushes with abandon).

The music in the longer cuts all feature start melodies and strong improvisations. Longer tracks, such as "Beautiful Intuition" (8:57) and "Apple Street" (8:09), take their time to establish the melody sections, leaving room for improvisations.  What stars out on initial listening is how intelligently Edwards sets up the songs from his role in the rhythm section.  His intuitive playing, knowing when to push or hold back, is one of the joys of the recording.  Then, listen to the soloists and realize how each has his own style (or sound, if you will); this music is not about ego or technique as much as it is about story-telling and communication.

"Prelude to Real Life" is an album to play over and over, the program never gets tiring. Donald Edwards can be a "power drummer", like Rudy Royston and Eric Harland, but his control and how he plays in different situations really stands out.  Highly recommended!

For more information, go to donaldedwards.com.