"Do Right" (Ruby Street Music) is the debut recording of vocalist Sari Kessler.  She left her career as a clinical psychologist to follow her passion as a singer, a passion that has led to share stages with saxophonist Houston Person, the late Phoebe Snow, Albert "Tootie" Heath, ands so many others.  Working in clubs and venues in and around New York City plus studio work has kept Ms. Kessler busy as well as studying with Jo Lawry, Jamie Leonhart, and her mentor Kate McGarry (who co-produced the album.) In the liner notes, Ms. McGarry writes about how Ms. Kessler was dissatisfied by her first attempt at the material and went back with producer (and percussionist) James Shipp to re-record each song.

Her intuition was correct as "Do Right" is done right. With the rhythm section of pianist John Di Martino, bassist Steve Whipple, and drummer Willard Dyson,  Ms. Kessler presents a program of standards, several "pop" tunes and one original, the deeply-felt "Empty Bed Blues."  That last track, featuring Mr. Person as the second "voice", displays her fine range (both vocally and emotionally). The blues permeates the album, from the opening trumpet sounds of Nadje Noordhuis on Bacharach & David's "Walk On By" - Mr. Shipp's excellent arrangement eschews the drama of the Dionne Warwick recording to plumb the emotional depth. Guitarist Ron Affif (who appears on over half the tracks) adds subtle guitar figures while Ms. Noordhuis moves in and out of the vocal line. There's a slow, touching, take on Duke Ellington's "The Gal From Joe's" (splendid piano solo) as well as a bluesy take of Joe "Kansas" McCoy's "Why Don't You Do Right", replete with smoky saxophone riffs, quiet guitar and piano fills, and well-placed hand claps.

The most impressive aspect of the recording is how immediate and gentle it sounds, even when the ensemble is rocking out.  The band, along with the saxophonist and guitar, swing the daylights out of "After You've Gone" (atop a happy New Orleans beat), never overwhelming the listener by outing too hard or loud. The band has great fun with "Frim Fram Sauce" (a big hit for Nat "King" Cole in 1945), making it quite fun and funky.  Ms. Noordhuis returns for a sweet take on Bobby Hebb's "Sunny" - Randy Porter's arrangement builds the tune off a low piano riff and slinky rhythmic work from Shipp and the rhythm section (Ms. Kessler and the trumpeter become the horn section during the piano solo, which is a delightful touch.)

By the time you reach the final track, "Moonglow" (a duo for voice and piano), the listener has been removed from the everyday and treated like a confidant, let in on the secrets of what life is , the trials as well as the joys.  There's a self-assured quality in the voice of Sari Kessler, a singer who one can tell is an avid observer and certainly a storyteller.  The warmth of her voice is matched by the warm sounds captured by engineer Dave Kowalski.  Pull up a chair and enjoy this musical journey.  For more information, go to www.sarikessler.com.

Darren English, trumpeter and composer, came to the United States from his native South Africa several years ago to study at Georgia States University. He has since settled in Atlanta and has just issued his first album as a leader.  "Imagine Nation" (Hot Shoe Records), is, arguably, one of the better debut recordings of the past several years.  His quartet, composed of Danny Banks, Jr. (piano), Billy Thornton (bass), and Chris Burroughs (drums) is excellent in their support and there are several guests who play throughout the album.

He did not leave all of South Africa behind as the title refers to a 3-part suite dedicated to the late Nelson Mandela that, for some odd reason, is split among the first 6 tracks. The suite is certainly powerful. The title tracks opens the program, a handsome melody that slowly opens to a strong solo section (English has a powerful attack and really articulates his notes) spurred on the fiery rhythm section.  The second part of the suite, "Pledge For Peace", comes three tracks later and utilizes excerpts from an interview with the South African freedom fighter.  The quartet, with the addition of tenor saxophonist Greg Tardy, play quietly beneath the voice and move forward into a emotionally rich melody line. There's a hint of Abdulah Ibrahim's music in the phrases that the wrap around President Mandela's voice.  The third section, "The Birth", is also quite intense, stopping and starting around a rhythm that suggest McCoy Tyner from the 1970s but without the overwhelming force. Burroughs plays with great abandon during the solo sections, slowing down the pace to work into the tenor spotlight then leading the charge as Tardy digs in.

Vocalist Carmen Bradford joins the quartet for a pair of standards.  The band sets a torrid pace on "What A Little Moonlight Can Do", a tracks that features a rollicking muted trumpet solo and a spirited piano outing. She returns for a lovely rendition of "Skylark"; her emotional voice, supported by bowed bass, brushes on snare, and piano counterpoint, finds the depth in Johnny Mercer's lyrics while English builds a handsome solo from Hoagy Carmichael's timeless melody and chords.

The album closes on two rousing cuts.  Tardy returns for "Bullet In The Gunn", a tribute to one of English's mentors, trumpeter Russell Gunn (the young musician plays in his mentor's big band).  The opening sax, trumpet, and drums interchange sets the stage for a romp through a swinging melody.  Mentor Gunn and fellow trumpeter Joe Grandsen join the quartet as they drive through a spirited reading of Ray Noble's "Cherokee" - the trumpeters each get a chance to "strut" and they do so with glee.

"Imagine Nation" is a delight from start to finish. The standards show much thought going into the arrangements of such recognizable works but it's the title suite that illustrates the great promise of Darren English.  He's already developed into a first-rate soloist and one hopes for a long career filled with sparkling original music. 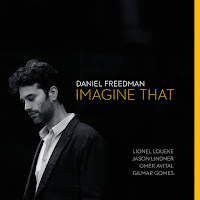 Drummer and composer Daniel Freedman, best known for his rhythmic contributions to bands led by Angélique Kidjo, Anat Cohen, and as a founding member of Third World Love, has a new album. "Imagine That", his 3rd as a leader (and 2nd for Anzic Records) features his long-time collaborators Jason Lindner (piano, keyboards) and Omer Avital (bass, oud) plus Lionel Loueke (guitars, vocals) and Gilmar Gomes (percussion.  The 8-song program includes four tracks composed by the leader, two by Lindner, one by Loueke, and a new arrangement of Radiohead's "Codex" (from 2011's "The King of Limbs"). That last piece, the fourth track on this CD, is the first slow song and features bluesy guitar, atmospheric piano, and very subtle percussion.  Among the early cuts is Freedman's "Aya", with a sweet West African feel thanks to Loueke's guitar and vocal - he's joined on the verses by Ms. Kidjo's and the song percolates atop the forward motion of Freedman and Gomes.  "Big In Yemen" bounces along, the melody first presented by Avital's oud then onto Loueke's guitar and the bass. One can see whirling figures on the dance floor as the band digs into the groove.

Among the highlights are the guitarist's "Mindaho", with its sinuous rhythms, expressive guitar and handsome vocal. The rhythm section creates great tension without getting loud. Lindner's sweet and soulful ballad, "Love Takes Time", is really a feature for Loueke's expressive guitar (check out his great blues riffs).  "Eastern Elegy", a ballad composed by the drummer, builds from the pianist's elegant reading of the emotionally strong melody line.  Aviator's expressive bass solo stands out as well.  The album closes n an uptempo note with "The Sisters Dance"; listening to Lindner's comping interacting with the powerful percussion during Loueke's smoking solo has the feeling of Middle Eastern montuno.

"Imagine That" is a delightful 50 minutes of music. Exciting rhythms, expressive melodies, and impressive solos abound and, best of all, this is a joy-filled experience. Kudos to Daniel Freedman and friends for making music that evokes sunny days and open hearts.

Give a listen here: