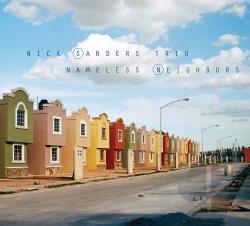 O ho, yet another piano trio CD in a season filled with them.  "Nameless Neighbors" (Sunnyside Records) is the debut recording from the Nick Sanders Trio.  New Orleans-native Sanders is a graduate of the New England Conservatory of Music (NEC) where he studied with Danilo Perez, George Garzone, Cecll McBee, Jason Moran, Jerry Bergonzi and John McNeil (not a shabby crew of people to learn from and work alongside.)   Fred Hersch produced the sessions that resulted in these 13 tracks (including 2 solo piano cuts) - Sanders composed 10 of the pieces and chose 3 smart covers, including "'Orse at Safari" (Herbie Nichols), "Manganese" (Thelonious Monk, also titled "Wee See" or "We See") and "I Don't Want To Set the World On Fire" (a 1941 hit by The Inkspots).  One can hear the influence of the Crescent City in Sanders's composing, especially on "New Town" (in the fiery opening section) and "Dome Zone" (one of the solo piano pieces.)  It's not overt but can be detected in the rhythmic movement of the piano lines.

There are numerous reasons why this recording stands out, not the least of which is the rhythm section. Bassist Henry Fraser and drummer Connor Baker (both currently NEC students) play with great fire and sensitivity that belies their relative youth.  They certainly can swing ("Row 18, Seat C" is the best example of the "driving" quality of the 2) but the composer is always throwing them curves, "stop-on-a-dime" tempo shifts and changes in dynamics.  Their work on the title track illustrates how the musicians are listening to each other as they navigate the changes. After a soft, introspective solo piano intro, "Motor World" races forward on "motor rhythm" in Sanders' left hand and Baker's propulsive snare drum. In the middle, there is a "free" section held in check by Fraser's stout bass work. Nothing feels sloppy or out of place.

There's a sense of playfulness in "Hymn" and "Flip" that builds from the pianist's desire to move away from the tried-and-true.  The former literally leaps away from its solemn opening section while the latter starts at a sprightly pace only to slow down within 45 seconds for a quiet bass solo.  Fraser's pleasing bass is also featured on "Simple" - he goes it alone for the first 3 minutes of the track (which is the longest on the program at 6:43) drawing he listener in on the strength of his melodic sense and rich tones. Sanders' melody and solo draw on the song's title, with the falling notes like a spring shower.

"Nameless Neighbors" joins the parade of excellent piano trio CDs issued in 2013 (other examples being the new Joey Calderazzo "Live" also on Sunnyside, "Pascal's Triangle" by Pascal Le Boeuf, the debut CD by Myriad3 and the new Noah Haidu on PosiTone).   These CDs may have the same figuration but are all quite different and all enjoyable.  The Nick Sanders Trio is young but, judging by the original works on this debut, the leader is already a formidable composer and arranger as well as an impressive pianist.  And, the rhythm section is also mighty impressive.  Be sure to pay attention to the cover photograph by Alejandro Cartagena - it, too, has great power. For more information, go to nicksandersmusic.com. For the most part, German-born pianist Jutta Hipp has been forgotten over the 5+ decades since she left the music world to become a seamstress and painter (she passed in 2003.)  She came to America in 1955 at the age of 30 at the urging of composer/journalist Leonard Feather.  Her 1956 Blue Note recording with Zoot Sims is, perhaps, her most famous as well as the one that sold the most.  The music revealed a pianist steeped in the styles of Teddy Wilson and Horace Silver, a facile soloist who held her own playing alongside the more famous Sims.

The German-based SWR Music/Jazzhaus label is in the midst of a project that will release hundreds of CDs over the next several decades that document Sudwestrundfunk studio and live recordings, programs and shows that started in late 1940s and went on for over 3 decades.  "Jutta Hipp: The German Recordings 1952-55" captures 4 different session over a 30-month period.  The most recognizable names here are trombonist Albert Mangelsdorff (who appears on 6 tracks recorded in 1953), guitarist Attila Zoller (2 tracks from 1955) and tenor saxophonist Hans Koller (who appears on 11 tracks spread over 3 dates.) The vast majority of the material is comprised of recognizable jazz standards with the exception of 1 track each composed by Mangelsdorff tenor saxophonist Joki Freund (who appears on 2 pieces from the 1955 session.)

Ms. Hipp's playing is solid throughout, steeped in the blues and swing of the 1930s and 40s.  On the 1952 sessions, Koller is shaky on several tracks but bassist Franz "Shorty" Roeder is a strong accompanist and drummer Karl Sanner reliable if unremarkable. Koller is stronger on the 1953 sessions, sharing the front line with Mangelsdorff.  The trombonist is more than a decade away from his best work but certainly displays his "swing" chops.

If you don't know Jutta Hipp, the best place to start is the Blue Note recording but "The German Recordings" have their charms, especially the leader's finely drawn solos.  Not essential, but worth hearing - to find out more about Ms. Hipp, go to https://www.facebook.com/pages/Jutta-Hipp/148942215117356. Bassist/cellist Oscar Pettiford (1922-1960) moved to Germany in 1958 and immediately became one of the busiest musicians on the European continent.  He remained busy throughout the rest of his short life, dying at the age of 37 from complications of a Polio-live virus.

Pettiford, a native of Oklahoma whose mother was a Native American and Father half-Black, half-Native American, turned professional in his teens playing in his father's touring band.  In 1943, he moved to New York City joining, in succession, the bands of Charlie Barnet and Roy Eldridge. The bassist was involved in the birth of the "Be-Bop" movement co-leading a group with Dizzy Gillespie.  Pettiford went on to work in the 40s with the Duke Ellington Orchestra and Woody Herman Thundering Herd. He led his own bands small and large in the 1950s, although he worked on many sessions with artists such as Thelonious Monk, Art Blakey, Miles Davis, Milt Jackson and with Sonny Rollins on "The Freedom Suite" Lp.

SWR/Jazzhaus Records has collected 4 session from a 7 month period from before and after an automobile accident that laid him up for several months and issued them as "Oscar Pettiford Lost Tapes: Germany 1958-59." The 16 tracks range from a pair of duets with trumpeter Dusko Goykovich that open the program to one quartet track featuring soprano saxophonist Lucky Thompson (Ellington's "Sophisticated Lady" to 4 cuts that feature the clarinet of Rolf Kuhn (including a slow reading of fellow Oklahoman Charlie Christian's "A Smooth One.") The December 2, 1958, studio session feature drum master Kenny Clarke, guitarist Attila Zoller and 2 tracks with  saxophone section featuring tenor saxophonist Hans Koller and 3 baritone saxophonists (but no guitar).  Clarke, Zoller, and Koller are featured on the final 2 cuts, recorded live in concert the following night.

Pettiford is an excellent bassist and cellist, not only as a "supporting" musician but also as a soloist.  His bass sound is so "full" on the duet tracks that one can hear the influence he had on Ray Brown, Ron Carter and others who followed.  Even his cello work sounds "big' as is demonstrated on the live recording of "All The Things You Are."  Koller's chops have vastly improved in the 6 years after the Jutta Hipp sessions (see above); he blends the smoother tones of Lester Young with the tenor presence of Coleman Hawkins on pieces such as the leader's "Blues In the Closet" and "O.P."

Overall, "Oscar Pettiford Lost Tapes" are definitely a good find.  The sessions serve as a reminder of what a strong musician he was, even in the last year of his short but fruitful, life. For more information on the SWR releases, go to www.jazzhaus-label.com.  To lear more about the bassist and his career, click here.
Posted by Richard B. Kamins at 8:49 PM