Several months ago, I had the joy to review "Throughout", the new solo piano recording from J.P. Schlegelmlch (pictured left).  The pianist arranged 10 pieces composed by Bill Frisell, helping listeners realize several aspects of the guitarist's music, i.e. 1) - his piece have a bit more complexity than meets the ear and 2) - one can hear numerous influences in the music.

As for the interpreter, Schlegelmilch is a busy musician, working with several ensembles including Old Time Musketry, Two of Anything, Minerva, and NOOK.

JP took the time to answer questions that I posited and those answers are what follow. My thanks to him.

Personal musical history: I started playing classical piano at age six and began exploring jazz, rock, and improvisation in high school. Since then I've been trying to connect the dots between these formative musical experiences, working towards an aesthetic that embraces all of them. I would say that "Throughout" is more of a "jazz" album than my other recent projects.
Accordion in your arsenal: When I moved to Brooklyn I started hearing the accordion in all kinds of contexts from experimental improvisors like Andrea Parkins and Ted Reichman to traditional virtuosos like Slavic Soul Party's Peter Stan. There is also a big interest in Balkan folk music among the Brooklyn jazz community which can be heard in the work of musicians like Chris Speed.  I used to play saxophone and sometimes I miss playing a wind instrument, so in some ways the accordion helps me get closer to that. I think the accordion has so many possibilities and I'm just starting to scratch the surface in my approach to the instrument.

Discovering Bill Frisell: The first Frisell music I heard was the "Live" album of his trio with Joey Baron and Kermit Driscoll. I had just started school at Berklee and had very little knowledge of modern jazz, my listening was still focused on the 50's and 60's. Hearing the total freedom that Frisell's trio had in terms of moving between different musical styles blew my mind. It had the energy of rock music, great melodies, exciting group interplay, and weird electronic sounds. All of this spoke to me on a deep level. Later, as I discovered more of Frisell's work, particularly the studio album "This Land", I gained even more respect and admiration for him as a composer, his unique voice as a guitarist, and his choices in putting together ensembles. 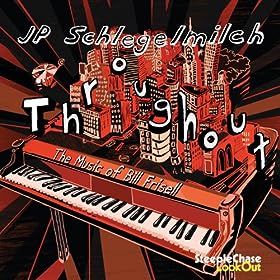 The new CD: I recorded the music on "Throughout" in two sessions during December 2011 and March 2012. Before that I played a handful of solo piano shows focusing on this material, which were the first solo performances I had ever done.
Live "Throughout": I played a CD release concert in March at Cornelia St Cafe in New York where I performed most of the music on the album. I think I will continue to keep some of these pieces in my repertoire when playing solo while also branching out into new material.
(Link to video of "Hangdog" from Cornelia St concert)
http://youtu.be/s5JX1aCM8po
More of this type of exploration: I don't have any other repertoire projects planned at the moment, I'm going to be focusing more on my own compositions. My next solo project will involve combining acoustic piano with electronic sounds using a keyboard, effects, and a sampler.

To find out more and hear selections from the CD , go to jpschlegelmilch.com.