Heading back home after a weekend with family looking forward to spending several hours digging through the CDs in my carry-on.

Pianist-composer Shamie Royston, who works in her sister Tia Fuller's band, is one of the many musicians from the Denver, Colorado area.  Married to the insanely busy (work-wise) drummer Rudy Royston and the mother of 2 children, she is beginning to step out on her own.  "Portraits" (self-released) is her debt CD as a leader and, judging by the contents, will not be her last.  Ms. Royston's melodies and arrangements capture the ear with their maturity plus her musicianship shines as well.  Doesn't hurt one bit that husband is the drummer on the recording - his multi-rhythmic approach sparks the up-tempo pieces while his brush work on the slower pieces is tender and, at times, quite melodic.  Bassist Ivan Taylor is the foundation of this music, holding down the tempi so the drummer can explore the different avenues his creative mind likes to take. On pieces such as "Summer in Central Park" (a Horace Silver composition and the only non-original on the disk, it's a treat to listen to the interactions of wife-and-husband while the bassist stays the course. Ms. Royston sets the pace on the opening track, "The Beast Within" but it's Mr. Royston who takes the title to heart as his rollicking drum work pushes the piece forward and his explosive work beneath the piano at the close actually sets the tone for the following track, "Run."  Before the close of that tune, his fiery work literally lifts one out of his seat.

Now, there are plenty of piano trio recordings on the market (seemingly dozens every month) but few with the exquisite interplay and sense of dynamic variation that inhabits "Portraits." Close your eyes on the quieter tracks and listen to how the musicians are listening to each other. When vocalist Camille Thurman joins the trio for the pretty ballad, "In This Quiet Place", the accompaniment is gracious and graceful, allowing the vocalist the freedom to move beyond the melody into a soaring wordless flight of human sound.  The stunning solo piano piece "Healing Hymn" is dedicated to the pianist's parents; Ms. Royston opens the piece in one graceful mood and then shifts into the more formal reading of the traditional "Yes Jesus Loves Me."

Don't be shy. Go out and find "Portraits", play it loud in the living room and quiet late at night, when you rise in the morning and as you walk through the woods. Joy, love and jazz in motion - emotionally rich, the music of Shamie Royston touches the heart. For more information, go to www.shamieroyston.com. 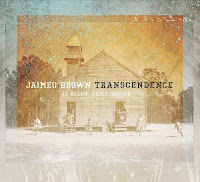 The first sound one hears is a voice singing "This world, this world is a mean world to live in, to stay in."  Before long, the cymbals rise up beneath the singer, then the tenor saxophone and harp-like guitar sounds as the drummer beings to drive the music.  Welcome to "Transcendance" (Motema Music), the fascinating new work from drummer/composer/sound explorer Jaimeo Brown.  The son of bassist Dartanyan Brown and pianist/woodwind player Marcia Miget, Brown has played with the likes of Steve Wonder, Carlos Santana, Q-Tip, Geri Allen, Greg Tardy and Bobby Hutcherson.  For his debut as  a leader, he builds his music off the work of the Gee's Bend Singers, a Gospel group from Alabama whose community is also known for artistic quilting.  Their voices, recorded (in some instances many years ago) permeate the music, giving Brown and his "regular" bandmates J.D. Allen (tenor saxophone) and Chris Sholar (guitar) the framework to build their explorations.  Several tracks include the Asian Indian voice of Falu; her impressive interaction with the Gee Bend Singers on the traditional spiritual "I Know I've Been Changed" is other-worldy, with a middle section where the trio moves into a South Indian rhythm. Brown's mother adds flute to the trio (plus voice) improvisation of "Be Free." Right in the middle of the program is the splendid 2-part "Power of God";  the first half of the 7+ minute track features the  Gee Bend Singers over a fast-paced drum accompaniment and, when you listen closely, the quiet and stately piano of Geri Allen. After the voices and drums drop away, Ms. Allen hews closely to the melody and chords for her solo meditation.  Ms.Allen also join the trio for the prayer-like Brown original "I Said" which closes with the voice of his 2-year old daughter Selah singing the melody line.

There are numerous magical moments on this CD.  The drums-tenor saxophone duet built around the "testifying" Gee's Bend vocal on "You Needn't Mind Me Dying" plus the trio and bass meditation (the drummer's dad supplies the bass) on "Patience" stand out for their emotional depth and sonic excitement (the processed vocals rising out of the improvisation at the end of the track is hair-raising.) The blues-drenched guitar work of Sholar on "You Can't Hide" and the hard-pounding drums blend well with the Gee's Bend voices; Allen's tenor work initially has the blues feel and follows the melody line but his solo is a melodic yet forceful statement of faith.

"Transcendance" is glorious, a project that illustrates how music can be built off the traditions of the past without watering it down or ignoring its original intent. In his liner notes, Jaimeo Brown writes that "global corporations and bands are destroying local cultures throughout the world."  Other people worry about the indifference of younger generations to the less dominant cultures and indigenous art.  Brown also writes "Hope is what flows out of the heart of these spirituals."  Hope fuels the emotional responses in this most impressive project.  For more information, go to jaimeobrown.com.
Posted by Richard B. Kamins at 7:41 PM