Live This Week + Music That Challenges and Soothes

When guitarist Joe Morris and keyboard master Jamie Saft get together, they sure do know get one's attention.  They have formed a band, called it Slobber Pup, recorded a CD for Rare Noise Records and now they are coming to New Haven this coming Tuesday April 23.  With bassist Trevor Dunn and drummer Balasz Pandi, the quartet pushes against labels although the group's Facebook page describes the music as "Microtonal Blues from Below" and judging by the examples I have heard, that's an apt description.

Slobber Pup will perform at Cafe Nine, 250 State Street in the Elm City.  Opening the show at 8 p.m. will be the New Haven-based trio Subfloor - that group features Chris Cretella (guitar), Carl Testa (electric bass, "modular effects") and Dave Parmalee (drums).  The house will definitely shake!  For more information, go to cafenine.com/.   To get a taste of Slobber Pup (now, that's an image), go to www.facebook.com/slobberpup.

It's a "homecoming" concert this Friday (4/26) at Firehouse 12, 45 Crown Street in New Haven when saxophonist Wayne Escoffery comes to the performance space.  Born in England, the saxophonist/composer moved to New Haven for his formative years (he was 11 years old when his mother decided to stay in Connecticut.)  Thanks to saxophonist/educator Jackie McLean, he studied at the Artists Collective in Hartford, then went on to the Hartt School of Music and received his Master's Degree from the New England Conservatory in Boston.  After graduation, Escoffery moved to New York City; his first major gig was with pianist Eric Reed's Septet.  He has since gone on to work with the Mingus Big Band & Orchestra, Ron Carter's Great Big Band, Tom Harrell's Quintet and with his wife, the vocalist Carolyn Leonhart. He's released 7 CDs as a leader, appeared on dozens more and has found time to work with high school friends Noah Baerman (piano) and Amanda Monaco (guitar) in a project called Playdate.

His most recent CD, "The Only Son of One" (2012, Sunnyside Records), is also his most personal, telling his life story in a series of instrumentals.  Most of the group that appeared on the record will be with Escoffery in New Haven including pianist Orrin Evans, bassist Hans Glawischnig and drummer Jason Brown.  Rachel Z (electronic keyboards) has replaced Adam Holzman for this tour. The Quintet will be playing 2 sets - 8:30 and 10 p.m - for ticket information, go to firehouse12.com or call 203-785-0468. I would not be surprised if this show sells out both sets, so don't hesitate to go online or call.  To find out more about the saxophonist, go to www.escofferymusic.com. "Tusk" (NCM East Records) is the first CD by Moran's Small Elephant Band, a quintet that features 9 originals played by Moran (nylon string guitar), McGinnis, Chris Dingman (vibraphone), Reuben Radding (acoustic bass) and Harris Eisenstadt (drums).  There are moments when the blend of acoustic guitar and vibes remind me of the music James Emery created in the late 1990s and early 2000s for ENJA and Between the Lines.  Moran has created an intimate program, one that relies on his fine melodies, impressive arrangements and the intuitive interplay of his band. One has to pay close to attention to the different colors in pieces such as "Elliptical" that opens the program, to the call-and-response of the vibes and guitar underneath McGinnis as well as the full-toned bass and martial drumming on that tune.  Moran's melodic ideas range from short phrases (like the forceful lines that open "Circle One, Two") and the Far-Eastern flavor of "Moon Reflected" - the latter piece changes direction almost immediately but pay attention to the interplay as all 5 musicians work to move the piece forward.

Words do not do justice to the various moods of this music, to the impressionistic quality of many of the tracks and to how Moran carves out solo space for everyone in the various aural landscapes. Eisenstadt's conversational drums power "Year of the Snake", whether he's pushing the tempo beneath the leader's solo or interacting with McGinnis's clarinet.  Dingman's sound fills the pieces, his sustaining tones underpinning the single-note melodies on tracks such as "Dream of Water" (Radding's "round" bass sound also stands out) or the Steve Reich-influenced "Monkeytown" (this track really rocks out.)

"Tusk" bears no relation to the 1979 Fleetwood Mac double Lp of the same name - this, unlike the older recording, is a true group endeavor, one on which each instrument is as important as the other in the success of the program. Sean Moran's compositions and arrangements defy easy definitions or any labels; this is music of great imagination and intelligence, well worth exploring time and again for its creativity and the quality of the musicianship.  For more information, go to sean-moran.com. 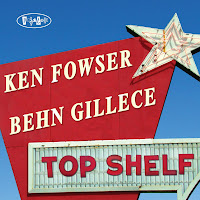 This was one of those weeks when music served as a "healing force, helped to ease the pain of the tragic events in Boston and elsewhere.  Driving home from work the other night, I put "Top Shelf" into the player;  it's the 4th PosiTone Records release from the duo of Ken Fowser (tenor saxophone) and Behn Gillece (vibraphone) and the easy-going swing was a true panacea (sounding just as fine the next day and in the background as I write.)  Featuring the classy rhythm section of Steve Einerson (piano), Rodney Green (drums) and Hartford, CT, native Dezron Douglas (acoustic bass), the leaders also invited trombonist Michael Dease to add his burr-ey sound to a number of the tracks.  When Dease is in the group, as he is on the opening track, "Slick", the music has a resemblance to the music of the Jazz Crusaders (pre-funk).  The blend of tenor and trombone really stands out as does the interaction of the vibes and piano.  When you add in the smart work of Green and Douglas, the music really flies.  "Stranded in Elizabeth" is an excellent example of the interaction and interplay.  Green really pushes beneath the vibes solo while Einerson's Tuyner-esque supporting chords, along with the fine bass work, acts as a solid foundation for the soloists.

There's a Latin tinge to "Unstoppable" as well as a snappy theme for the tenor and vibes.  In a short YouTube video that accompanied the CD's release, the leaders mention the influence of Bobby Hutcherson's work with saxophonist Harold Land and it is most evident on tunes such as this one and the up-tempo title track.  Green creates sparks beneath the hearty tenor solo and prods Gillece to produce one of his most notable solos on the recording.  Again, Einerson's forceful chords and driving solo stand out.

Some may say that "Top Shelf" does not break new musical ground but what the CD offers an eager listener is a band comfortable with each other playing a repertoire born from the duo's weekly gigs at Small's Jazz Club in New York City.  Rodney Green, Steve Einerson and Dezron Douglas are super throughout, giving the music the energy it needs to stand out.  For more information, go to
www.posi-tone.com.
Posted by Richard B. Kamins at 9:35 PM