Firehouse 12, 45 Crown Street in New Haven, continues its Spring 2013 Concert series with the duo of Dan Tepfer (piano, alto saxophone) and Ben Wendel (saxophones, bassoon, melodica, piano) this Friday evening (April 19).  The duo have been friends since moving to New York City; both have busy careers,Tepfer working with Lee Konitz, Alexis Cuadrado, Rob Garcia, and his projects while Wendel is busy with Kneebody and his own solo projects.  They talked about working together and were able to make it happen last year, bringing a slew of instruments and ideas to the Yamaha (piano) artist space in Manhattan, the same studio where Tepfer recorded his "Goldberg Variations/Variations" (released on Sunnyside in October of 2011.)

Over a couple of nights, the duo recorded a number of originals (3 each), 2 Thelonious Monk pieces), a piece by Lennie Tristano, a standard, an adaptation of a work by George F. Handel and an improvised original. Some pieces have overdubs, others just the 2 players; 2 pieces clear the 6 minute while 2 barely go past 2 minutes. The CD, released by Sunnyside on March 12 of this year, is titled "Small Constructions." Right around the release date, the duo played a series of live shows in the States and Europe during which the pieces on the recording plus others really came to life.

For their Firehouse gig, Messrs. Wendel and Tepfer will play 2 sets, 8:30 and 10 p.m. (separate admission charges).  For more information, go to firehouse12.com or call 203-785-0468.  To learn more about "Small Constructions". go to sunnysidezone.com/album/small-constructions.

On Wednesday April 17, the project known as Ninety Miles comes to Hartford.  The ensemble, spearheaded by Stefon Harris (vibraphone), David Sanchez (tenor saxophone) and Christian Scott (trumpet), takes its name from the fact that the group came together in Cuba, just 90 miles south of Key West, Florida.  Their self-titled debut CD came out in 2011 and really captured the ear with its savvy blend of Black American Music and Cuban-Caribbean rhythms. For the band's latest tour, Nicolas Payton is in the trumpet chair but I'm not quite sure who's in the rhythm section. Nevertheless, Ninety Miles is playing at 7:30 p.m. in the acoustically-fine Asylum Hill Congregational Church, 814 Asylum Avenue.  For ticket information, call 860-278-0785 or go to www.ahcc.org. 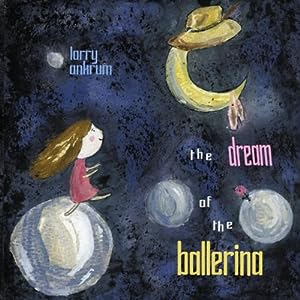 Some years ago, I reviewed a CD by saxophonist-flutist-composer Larry Ankrum for CADENCE.  I remembering being impressed by the tome of his saxophone and his fine, not fussy, playing but then lost track of Ankrum.  Seems he's been spending some time touring behind jazz, blues and Cajun artists as well as recording in New Orleans.  His new CD showed up the other week; "The Dream Of the Ballerina" (self-released) features the splendid rhythm section of bassist James Singleton and drummer Kevin O'Day plus, much to my joy and surprise, pianist Joe Ashlar.  Young Mr. Ashlar grew up in Middletown, CT (my hometown), the son of my good friend Joe Rybzcyk - I watched him grow up from a child prodigy to a working musician (and all the happiness and sorrow along the way.)  His delightful, spare, melodic piano work on this CD is a pleasure to listen to.  The impressionistic swing of "Le Chapeau de Monk" blends Thelonious with Crescent City rhythms - the piano solo starts with a few Monk allusions before Ashlar dances away.  The blend of flute and piano on the opening "Best Friends" has both a gentle and harder edge; O'Day's dancing drums and Singleton's solid bass lines give the song its groove and direction while there's the feel of Abdullah Ibrahim in the piano chords.  There's a late-40's- early 50's feel to "Champagne Moon", a delightful ballad that seems to channel Don Byas in the tenor and Teddy Wilson on the piano's opening theme.

The rhythm section (minus the piano) drives like a runaway train on the hard-bopping "The Worse the Deed, the Better the Confession".  O'Day is the main catalyst here, his expressive drumming pushing the saxophonist to dig deep on every phrase.  He and Ashlar get into a tango groove on "Cartas de Suelta" and Ankrum's tenor dances with joy to their celebration. The piano solo has the feel of a rainstorm on a hot night, the notes falling all around the listener.

The final 2 tracks, "The Silent Part of Your Soul" and "Searching For What You Never Lost", are group improvisations, the former starting slowly and building surely to a boil atop the dancing bass lines while Ankrum's tenor sax dances the latter piece in, prompting the ensemble to get into his sweet groove. The piece changes course several times through its 11+ minutes. After a lengthy bass solo, Singleton drops into a funky bass line and the band, led by Ankrum, ride it until the end.

"The Dream of the Ballerina" should satisfy those listeners who dig a groove but also like an ensemble that takes chances yet can play it straight. It's good to hear Larry Ankrum playing so well (and displaying fine flute "chops") and his band truly shines.  Go to www.larryankrum.com to find out more.

Sony/Masterworks has revived the Okeh label, a company that began life in 1918 to issue "ethnic" recordings ranging from German to Polish to Yiddish.  But, the label really made its reputation releasing "race" records for the growing African American communities in the industrial big cities of the Northeast and Midwest.  Arrtists such as Sidney Bechet, Mamie Smith, Louis Armstrong and Duke Ellington issued 78 rpm records on the label. Columbia bought the company is 1926 and has owned the name ever since.  They hit it big in the 1950s with Johnny Ray and again in the 60s and early 70s when they hired Curtis Mayfield to produce the likes of Major Lance and Larry Williams.  Okeh came back to life in the 1990s with artists such as G.Love and Special Sauce, Keb' Mo and Little Axe but disappeared in 2000.

Okeh is back in 2013 and it's first release is a solo recording by John Medeski (yes, he of MM&W).  Titled "A Different Time", Medeski recorded the program on a 1924 Gaveau piano. Built in France, the instrument has a delicate sound and Medeski responds with a program that is meditative, highly melodic and strongly impressionistic. 7 of the 9 songs are originals with the exceptions being a sweet and ever-so-slow reading of Willie Nelson's "I'm Falling In Love Again" plus a fine arrangement of the Gospel classic "His Eye Is On the Sparrow."  Medeski's "Luz Marina" shows the influence of Erik Satie in its chord patterns and gentle melody while "Lacrima" opens with notes that seem to drip from the pianist's fingers. "Ran" has a darker quality, not unlike the minimalist style of Mr. Blake for whom (I believe) the song is written.

In his liner notes, John Medeski hopes "that this recording can be listened to late at night, when social responsibilities are over...when all need and wants have been put to momentary rest....when you are tired of words, when you are ready to yield to the sounds of these simple contemplations for the Gaveau."  Don't come to this CD expecting the explorations of Martin, Medeski and Wood.  Quiet, gentle, somber and peaceful, "A Different Time" is a balm for bad days, for sadness, to be listened to with the lights dimmed (or totally out), alone or with a person you love.  For more information, go to www.johnmedeski.com.
Posted by Richard B. Kamins at 9:32 PM