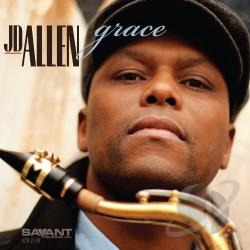 Since emerging on the contemporary music scene in the mid-1990s, tenor saxophonist/composer JD Allen has developed into one fine musician.  He has recorded and toured with groups led by bassist Eric Revis, pianist Orin Evans, trumpeter Jeremy Pelt and drummers Cindy Blackman, Gerald Cleaver and, most recently, Jaimeo Brown.
Over the past 5 years, Allen has led a trio with drummer Rudy Royston and bassist Gregg August that produced 4 CDs for Sunnyside and Savant, recordings packed with short yet powerful statements.  Reviewers and critics consider musician/composers such as Max Roach and Charles Mingus - to my ears, Allen's Trio recordings show the composer as a poet, a master of musical haiku.

"Grace", JD Allen's 2nd release for Savant Records, introduces his new ensemble, a quartet featuring bassist Dezron Douglas and drummer Jonathan Barber (both from the burgeoning Hartford, CT, music community) plus pianist Eldar Djanigirov.  Allen has not recorded, as a leader, with a pianist since Orrin Evans appeared on his 2002 Criss Cross CD, "Pharoah's Children."  Instead of a majority of tracks under 4 minutes, 9 of the 11 Allen originals on the CD are over 5 minutes.  Yet, this quartet never wastes its time - Allen has created a program that has great melodies and fine solos, allowing the rhythm section an equal role in the construction of each performance. As for Eldar, he brings a fascinating voice to the proceedings, displaying the sound of Herbie Hancock and Andrew Hill in his accompaniment on tracks such as "Cross Damon" and "Lode Star." Unlike many of his own solo recordings, his playing here is sparse, mostly unadorned, less reliant on his brilliant technique and more on his interaction with his bandmates.

As for Allen, there are moments when his humor shows through (his forceful solo on "Papillon 1973"),   or his deep and defiant blues feel (which one hears on "Detroit") and his emotional, prayer-like tone on "Selah (My Refuge)." His "conversations" with the rhythm section have a striking "push/pull" feel - all 4 paint a masterful portrait on "Chagall", the bass and drums imbuing the piece with a sense of floating.  That "airy" quality reappears in the rhythm section on "The Little Dipper", even as Allen's expressive tenor soars through this musical cosmos - there are a number of times on this recording when Allen sounds like Arthur Blythe (even though the latter plays alto and not tenor.)  One can hear a certain inflection, a bluesy cry, that Blythe employed of many of his songs (a good example is the opening line of "Chagall.")

Several of the tracks on "Grace" have a basis in astronomy (along with those already cited, there is also  "Luke Skywalker" and "Pole Star") while others have a religious intent in their titles (such as the title track, "Mass" and "Selah.")  Allen divides the program into "Side One" and "Side Two" yet this music  flows easily from one piece to the next. If you listen closely to the piano and saxophone, you can hear them share or repeat phrases from the "theme" section in their solos. Also, I am so impressed with "free swing" of Douglas and Barber - they are the pulse and wit of this fine program. With "Grace", JD Allen has opened a door into a new and intriguing room in his musical house.  For more information, go to www.jdallenmusic.org/. 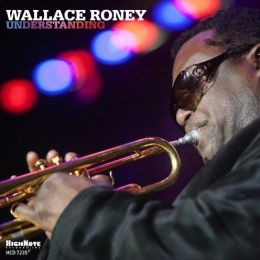 For the better part of his career (almost into its 4th decade), trumpeter Wallace Roney (53 years old on May 25) has been compared to Miles Davis (with whom he studied for a number of years.) That may have flattering once upon a time but now it's quite obvious from his numerous recordings as a leader and sideman, Mr. Roney is his own man.  Since his move to HighNote Records in 2004, the musician and composer has also taken on the role of mentor, a position that he takes seriously and that liner notes writer John Kelman makes sure to stress.   With his new release, "Understanding", Roney introduces bassist Daryl Johns (16 at the time of the recording) and welcomes pianists Victor Gould and Eden Ladin as well as saxophonists Arnold Lee and Ben Solomon into the fold - this is drummer Kush Abadey's 3rd CD with the trumpeter.

"Understanding" is also Wallace Roney's first all-acoustic recording in over a decade. Yet, that does not imply the music is a move backwards (or lateral) - the concentration here is on group interplay and interaction with material ranging from 2 pieces each from McCoy Tyner and Duke Pearson, one each from the leader, Solomon and Lee plus the striking title track from the pen of drummer Roy Brooks (1938-2005).  Roney's contribution is the hard-bop flag waver "Combustible" that serves as a vehicle for John's fiery solo as well as a fine solo from pianist Gould.  Lee's "Red Lantern" also is a hard-nosed track with the front line (trumpet and 2 saxes) flying atop the wondrous propulsion of Johns and Abadey (there's a real connection to the late Tony Williams is this drummer's forward motion and cymbal work.) Solomon's contribution, "Kotra", makes a direct connection with the Miles Davis Quintet of 1964-69, in its opening theme and medium tempo that always seems to be ready to break loose.

Roney breaks out the mute for the sweet version of Tyner's "You Taught My Heart To Sing" and, after his short but heart-felt solo, allows Solomon and Gould to step forward for longer, more involved, solos - don't miss the strong cymbal and musical bass lines beneath the soloists.  Pearson's "Is That So?" starts slowly bit soon picks up a head of steam led by the forceful trumpet solo.  Lee, Solomon and Gould keep the fires stoked, propelled along by Abadey's insistent drive.

The more I listen, the more I can visualize this band on stage or in a nightclub setting.  Though all but one of the tracks are over 6:50 seconds, this music does not overstay its welcome. Wallace Roney sounds fine throughout, his young charges impress with their energy and hard work, making "Understanding" a fun and worthwhile listening experience.  For more information, go to www.wallaceroney.com.
Posted by Richard B. Kamins at 8:51 PM