Seattle, Washington-based trumpeter/composer/blogger Jason Parker highly recommended that I listen to "Dialogue" (Origin Records), the new CD from the trio of trumpeter Thomas Marriott, Mark Taylor (alto saxophone) and drummer Matt Jorgensen.  It's actually the ensemble's 2nd CD which was released in 2010 in Marriott's name as "Human Spirit."  That's now the name of the group. The 8 tracks here were recorded in October of 2011 at Seattle's Earshot Jazz Festival.  For the live performances, pianist Orrin Evans and bassist Essiet Essiet joined the trio. This music crackles with energy, the songs (4 by Marriott, 2 each by Taylor and Jorgensen) have strong rhythmic foundation and good melodic structure.  Don't know if Essiet and Jorgensen have worked much together but they click from the opening moment of the drummer's (aptly-titled) piece, "In Unity."  With an opening melody reminiscent of The Jazz Crusaders, the song opens up into a solo section that allows the players to fly over the propulsive rhythm section.  The soloists have a limited amount of time and each one shines.  Marriott's crisp tone and fervid imagination is evident every time he lifts the horn to his lips.  On "Song for Samuel" (a Marriott composition that would fit right in the repertoire of Art Blakey's Jazz Messengers or the contemporary septet, The Cookers), he, Taylor and Evans burst out with hearty solos. After you listen to their fine work, play the track again and pay attention to the splendid rhythm section. The trumpeter also contributes the handsome ballad, "148 Lexington" -  here the drums are somewhat spare while Essiet offers strong counterpoint to the soloists although, when Taylor picks up the intensity during his solo, Jorgensen responds (also pay attention to Evans evocative backing work and sweet solo.) The drummer lights yet another fire under the band on his piece, "Ridgecrest"; the intensity rarely lets up although everybody lays back for the forceful and melodic bass solo.

Like just about all "live" CDs, "Dialogue" makes the listener wish he or she had been in the audience on the nights this music was created.  Human Spirit, indeed!  Thanks again, Jason Parker, for your excellent recommendation (check out his work by clicking on his name in the opening sentence - his 2011 recording of the music of the late Nick Drake deserves a space in your collection.)  For more about Human Spirit, go to thomasmarriott.net/projects/human-spirit/.

Although Eric Erhardt (tenor saxophone, clarinet, flute) is a new name to me, his career spans 2 decades and ranges from playing in the pit bands of touring Broadway shows to the Artie Shaw Orchestra to the Eastman Wind Ensemble.  "A Better Fate" (Tapestry Records) is his debut as a leader; he's assembled a top-notch band which includes Russ Johnson (trumpet, flugelhorn), Sebastian Noelle (electric guitar), Linda Oh (acoustic bass), Mike Davis (drums), Nick Paul (piano) and James Shipp (percussion) plus Dan Willis (soprano saxophone, oboe) on 2 of the 8 tracks.

Looking at the lineup, one realizes this music has a fighting chance of being quite good.  And, it certainly is.  Erhardt wrote and arranged all the pieces, creating pieces that seem to move outward from the opening notes.  Davis truly can drive a band, works well with Shipp's percussion arsenal and still leaves plenty of sonic space for Ms. Oh's fundamentally strong bass work.  Listen to them firing on all cylinders as the band flies through "Ten Years", rising out over Noelle's hard-edged guitar work.  And, the rhythm section can also be subtle - on "Not Like Before", Shipp's insistent triangle alongside Davis's strong brushwork leads the piece in.  Erhardt's forceful yet musical clarinet solo is impressive giving way to the rich flugelhorn spot (Paul, who is a member of vocalist Nicky Schrire's fine band, shines in his chordal support.)  Noelle enters over a modified reggae beat, his intense lines pushing against the softer piano chords. "Powwow Now", based on a melody from a Navajo corn-grinding songs, commences with insistently repeated piano chord behind Ms. Oh's melodic solo.  The blend of oboe, soprano sax, tenor, piano and guitar creates a swirling melody out of which the fine solos arise.  After a rubato opening with tenor and trumpet dancing around each other over snappy percussion, the title track features a Latin rhythm with a melody for trumpet, tenor and Noelle's rippling guitar. The arrangement behind the melody and solos offers pleasing counterpoint. Listen to how the Paul's lines complement the active bass lines as well as the percussionist's exciting stew.

In his liner notes, Eric Erhardt gives credit fellow saxophonists Dave Liebman, Felipe Salles and Dan Willis for helping to make these compositions and arrangements "stronger."  Their input certainly pushed Erhardt in the right direction because this music is intelligent, exciting and richly melodic.  For more information, go to ericerhardtmusic.com. 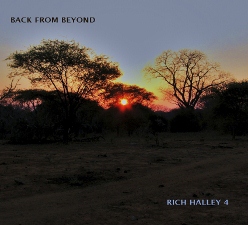 Speaking of energy, "Back From Beyond" (Pine Eagle Records), the new release from the Rich Halley 4, opens with a fiery tenor/drum duo.  Tenor saxophonist/composer Halley's musical conversation with his son Carson (the drummer) recalls similar dialogues by John Coltrane and Elvin Jones as well as work by Max Roach with Odean Pope in the late 1970s.  After their short intro, trombonist Michael Vlatkovich joins the discussion followed shortly by the muscular bass lines of Clyde Reed. The South African funk beat that opens "Section Three" is fun; the rhythm is modified for the Halley and Vlatkovich solos.  It's also fascinating how the front line play a "call-and-response" which leads the rhythm section back to the funky beat.

3 of the 10 tracks are credited to the entire group but none feel scattered or overlong.  In fact, "Reorbiting - for Sun Ra" a strong melodic thrust from the opening dialogue featuring Vlatkovich and Reed. When the trombonist falls into a short percussive phrase, the Halleys both join and there is some fine interplay. Another group piece, "Continental Drift", starts off quite "free" and it's the forceful melodic presence of Reed that pushes the others to a more melodic (while still forceful) approach.

Michael Vlatkovich is a fine partner for Rich Halley in that he matches the power of the tenor (his funky solo on "Broken Ground" brings to mind Fred Wesley);  the trombonist can bring the fire when needed but he can also can go "gut-bucket" or highly melodic when called upon. The bluesy ballad "Opacity" is a fine example of how Vlatkovich fits his sound and personality into a piece without overwhelming it.  The manner in which the saxophonist and he move in and around each other speaks to their long-time friendship as well as the numerous gigs they have worked together.

The title and Michael Coyle's liner notes make reference to the fact that the music on "Back From Beyond" is a "return to form" (in this instance, to songs that have theme-solo-theme" format) but this is not "retro" music.  Listeners familiar with Rich Halley's music will not be surprised by either the power of this band or the leader's melodic approach. He's been his "own man" for 3 decades, creating a repertoire that challenges and moves the engaged listener. Kudos also go to the splendid work of the rhythm section; they not only propel this music but also creatively interact with the front line.  For more information, go to www.richhalley.com.