'Tis the time of the summer season for the 2012 Greater Hartford Jazz Festival. 3 nights and 2 days (7/20-22) filled with jazz in Bushnell Park, this year the Festival organizers have, in my mind, wisely separated the genres of jazz into Latin (Friday), Smooth Jazz (Saturday) and Eclectic (Sunday).   Leading off the festivities at 7 p.m is saxophonist-vocalist Layla Angulo whose exciting blend of Caribbean and Brazilian rhythms will likely have the audience on their feet throughout her set.  Closing the opening at 8:30 will be the Steven Oquendo Latin Jazz Orchestra - the New York City-based ensemble should raise the temperature even higher.

Saturday, the Festival Grounds open at 1 p.m. but the first official act of the day, electric guitarist
Matt Marshak does not take the stage until 4:30.  He'll set a mellow tone for Elan Trotman, tenor saxophonist, who will appear with a group featuring bassist Gerald Veasley. At 7:30, jazz-blues guitarist Jeff Golub (pictured above) will rock the park with his classy blend of styles.   Golub has been going through a rough patch, the sudden onset of blindness, but he has not slowed down and seems to be playing better than ever (find out more at www.jeffgolub.com.) More saxophone follows at 9 p.m....in fact, a lot more, in the form of The Sax Pack.  Jeff Kashiwa, Steve Cole and Marcus Anderson blend their soulful styles into a funky melange that really swings.  The evening closes with the Motown Dance Party featuring Jus’ Us from 10:45 until midnight.

Sunday starts early with a Dixieland Jazz Mass at Christ Church Cathedral,located at 45 Church Street.  The afternoon session commences at 3 p.m. with what should be a rousing performance by the Destiny Africa Children's Choir.  The ensemble, based in Uganda, is composed of children from the Kampala Children's Centre, an organization that rescues children from war-torn areas and extreme poverty. The final 3 acts of the day are all "home-grown" beginning at 4:30 with vocalist Dana Lauren. Since coming on to the scene several years ago, Ms. Lauren (pictured above) has developed into an excellent interpreter of the "Great American Songbook."  At 6 p.m., The Afro-Semitic Experience, co-led by bassist David Chevan and pianist Warren Byrd, premiere music from their new work, "Jazz Souls on Fire." The sextet, in existence for 14 years, creates a raucous blend of jazz, Jewish liturgical music and African American gospel.  At 7:30 p.m., the weekend comes to a fascinating close with the Hartford Symphony Jazz and Strings featuring saxophonist/composer Jimmy Greene.  Mr. Greene, a native of Bloomfield, CT, has just returned to his home state after 3 years of teaching in Winnipeg. Manitoba.  He is now on the jazz faculty of Western Connecticut State University, the excellent program led by guitarist Jamie Begian.   The ensemble will play works composed and arranged by the gifted saxophonist.

For tickets and more information, go to www.hartfordjazz.com.

On Saturday July 21, The Buttonwood Tree, 605 Main Street in Middletown, presents the guitar duo of Vic Juris and Sheryl Bailey - the 2 fine jazz guitarists have a program called "The Electric Ladyland Project", dedicated to the music of Jimi Hendrix.  Both Ms. Bailey and Mr. Juris are respected musicians, the former for her work with bassist Richard and clarinetist David Krakauer (as well as her own trio) and the latter for his association with saxophonists Richie Cole and Dave Liebman (and his own groups.)  Both are consummate musicians, technically outstanding yet emotionally strong. This should be a fun project.  Opening the show at 8 p.m. will be guitarist/vocalist/composer Ray Mason. For more information, go to www.buttonwood.org. 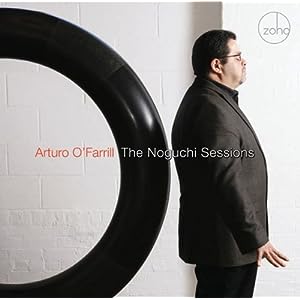 On the evening of October 17, 2011, pianist, composer and bandleader Arturo O'Farrill entered the gallery space of The Noguchi Museum in Long Island City, New York to record his first piano CD.   The museum houses the life's work of Japanese-American artist Isamu Noguchi (1904–1988) and is filled with sculptures, sketches, photographs and more, all from the creative mind of a man who, due to his mixed parentage (American mother and Japanese father) felt like an outsider throughout his career.  In his liner notes to "The Noguchi Sessions" (ZOHO), the end result of what O'Farrill recorded in the museum that night, the pianist speaks of his parentage (Cuban father with roots in Ireland, Mexican mother) and that feeling of being defined as an outsider.  He's had a busy career and his music reflects not only his heritage but his love for all minds of music.

Over the course of 6 minutes, O'Farrill takes us on a musical journey (6 standards, 6 originals) that touches on his heritage ("Siboney" by Cuban composer Ernesto Lecouna as well as "Danny Boy"), songs that look at the socio-political climate in this country ("The Delusion of the Greedy" and the many stereotypes to be found in "O'Susanna") and bows to his influences ("Little Niles" composed by Randy Weston, another musician who did not always feel at home in his native land.)  Yet, there is nothing heavy-handed or superficial in these compositions and free improvisations.  As one knows from his work with the Afro Latin Big Band and smaller ensembles, O'Farrill almost always melds melody with passionate rhythm.  Here, he shows his playful self as well as a wistful side with "Once I had a Secret Meditation", a lovely improvised piece based on the standard "Once I Had a Secret Love."  He's not afraid to let his fingers fly, creating long flowing melodic lines that reflect the madness of daily existence - one hears echoes of George Gershwin in the multi-sectioned "Alisonia", in the pianist's blend of 20th Century melodies with jazz flourishes. While "Danny Boy" hearkens back to O'Farrill's familial roots, it's also a meditation on 9/11/01 and its terrible aftermath, the emotional toll on the people of New York City and elsewhere  His sweet ramble through Charles Mingus's "Jelly Roll", a piece dedicated to one of the fathers of jazz, is a delightful way to close the program - it's quite a bit removed from the helter-skelter approach on the freely improvised "The Sun at Midnight" that opened the CD.  It's as if the pianist has exorcised whatever fears he had when entering the museum.

"The Noguchi Sessions" is meant to be heard from beginning to end without interruption.  Most effective after dark because one can get lost in the different musical worlds the pianist conjures up.  With this new recording, Arturo O'Farrill creates a new chapter in his impressive book of music, one that might not make you dance but one that resonates with soul, intensity and adventure. For more information, go to www.arturoofarrill.com.