Searching for a title that would reflect a series of short reviews, the name "Rick's Picks" immediately came to mind; 1) - because of the rhyme and 2) - it hearkens back to a wine newsletter written by the late Rick Lewis, who wrote monthly wine reviews for his store in Madison, CT.   At the time he wrote his columns, I owned a wine store, wrote an occasional newsletter and, truth be told, coveted the name. 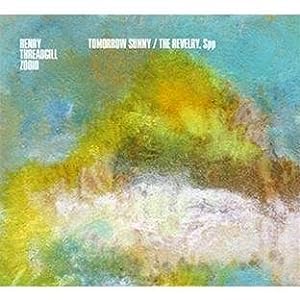 Henry Threadgill Zooid - Tomorrow Sunny/The Revelry, Spp (Pi Recordings) - Someone close to me asked as I was listening to the new recording from Mr. Threadgill and ensemble "How will categorize this music?"  Simply put, you can't easily slap on label on this or, actually, any music Threadgill has created in the 4+ decades he has been active.  To this day, "Air Time", the Lp he recorded for Nessa Records in 1977 with bassist Fred Hopkins and drummer Steve McCall (collectively known as Air), sounds fresh and innovative.  Zooid  - Liberty Ellman (acoustic guitar), Stomu Takeishi (acoustic bass guitar), Jose Davila (trombone, tuba), Elliot Humberto Kavee (drums) and Christopher Hoffmann (cello) - is an all-acoustic ensemble (Threadgill plays alto saxophone, flute and bass flute) that is, at times, electrifying.  Each voice stands out yet the music is not about stellar solos.  Pieces such as "See The Blackbird Now" and "So Pleased, No Clue" move organically from section to section, instruments moving in and out of the mix, multiple dynamics and eloquent melodic lines.  Kavee doesn't just keep "time"; in fact, he frees it up to the point where he lays out.  Davila does not just serve as a "foundation" for this music but often plays counterpoint to the soloist (as he does with Hoffman's cello on "Tomorrow Sunny").  It's a pleasure to hear the leader's tart alto lines over Kavee's fiery drums and Davila's low tuba notes on "Ambient Pressure Thereby", pushing against them then rising up and over the musical hubbub. His flute work is quite poetic, at times, a glimpse of beauty in the musical jungle.

"Tomorrow Sunny/The Revelry, Spp" is not music for everyone nor does it try to be. But, if you want to take an unique musical journey, Henry Threadgill is the ticket.

Bob Mintzer Big Band - For The Moment (MCG Jazz) -  Believe it or not, this is the 19th (!) recording tenor saxophonist Mintzer has created with his big band since 1983.  Not only did he assemble the 17-piece group but he created the 9 arrangements on this CD.  With the ace rhythm section of Lincoln Goines (electric bass) and Peter Erskine (drums) plus the fine keyboard work of Russell Ferrante (Mintzer's cohort in Yellowjackets)and strong rhythm guitar work of Marty Ashby, Mintzer and company explore the many facets of Brazilian music.  Guitarist and vocalist Chico Pinheiro appears on 3 tracks including the lovely reading of Antonio Carlos Jobim's "Corcovado" (the arrangement calls for 3 flutes and they create a lovely atmosphere.) Pinheiro's crackling acoustic guitar lines drive his composition "Un Filme" while Mintzer's smart arrangement wraps the reeds and horns around him like a warm blanket.  The splendid reading of "For All We Know" shine with the flutes and brass playing variations of the melody while "Berimbau" bounces along like the instrument the song is named for (thanks to the work of Erskine and guest Alex Acuna's fine percussion.)

"For The Moment" captures the allure of Brazilian music as it adds the excitement of modern big band. One can hear the traces of the Thad Jones-Mel Lewis Orchestra in the swell of the reeds and brass; yet, this music reflects the big ears and creative imagination of Bob Mintzer, a man who never rests on his considerable laurels. For more information, go to bobmintzer.com.

Jacám Manricks - Cloud Nine (PosiTone Records) - For his second release on the Positone label (and 4th overall), alto saxophonist Jacám Manricks, a native of Brisbane, Australia, has assembled quite a cast to play his music.  Guitarist Adam Rogers, organist Sam Yahel, drummer Matt Wilson and, on one cut, trumpeter David Weiss, do exactly what one might expect, play with fire and intelligence. Wilson keeps the rhythms flowing and, on pieces such as the Finnish hymn "Ystava Sa Lapsien", creates a "conversationalist" tone with the other musicians, not driving the song but adding numerous colors.  Rogers shares the front line while playing with intelligence and creativity throughout. He can so exciting even at lower volumes, as he so nicely displays on "Take The Five Train."   Yahel is a double threat - his bass pedal work sets the foundation for the songs, opening up the "bottom" for Wilson's highly active percussion while his solos sparkle with invention (his work in the background also is quite fine. The organ and guitar spin a lovely web on "Cry", Manricks wisely holding off until both have had their say. Then, he "ups" the intensity level with a crackling solo.  Although listed alongside the other musicians, Weiss only appears on the languid "Alibis and Lullabies", his declaratory solo, with his crisp intonation, a pleasing foil to the bluesier sounds of the saxophonist.


As for Manricks, he plays like he composes, with great assurance and fluidity.  His compositions are fully-realized, not just riffs for solos.  When he steps out, one hear the lineage of alto saxophone, with hints of Charlie Parker's flurry of riffs, Cannonball Adderley's bluesy tones and the occasional more contemporary attack of David Binney.  Truly, he has absorbed any and all influences which the listener hear in great clarity on his unaccompanied piece "Serene Pilgrimage."  He displays a much softer and richly melodic side on Antonio Jobim's "Luiza" - while Wilson's drums dance beneath, the saxophone, guitar and organ weave around each other with gentle phrases swirling about.

As one knows, there are, seemingly, thousands of fine musicians throughout the world.  Many of them are technically adept, many are good composers and arrangers, but few are as accomplished as Jacám Manricks.  His writing is intelligent but not scholarly and his musicianship excellent and often soulful.  "Cloud Nine" shines!  For more information, go to jacammanricks.com.