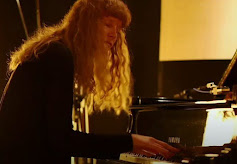 One of the treats of reviewing music is that I get plenty of albums that seem to come out of nowhere by artists I don't know.  And, sometimes, I'm pleasantly surprised! Out of Canada via Montreal comes the debut album of pianist and composer Kate Wyatt.  The Vancouver B.C native is certainly not unknown in her native nation having worked with the late Kenny Wheeler, with composer and bandleader Christine Jensen, vocalist Jay Clayton, the Orchestre de National de Jazz de Montreal (ONJ), and with her husband, bassist Adrien Vedady.  She's a richly-melodic and thoughtful musician not given to displays of technique but always working to give her music depth. 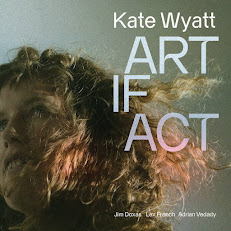 "Artifact" (self-released) is Kate Wyatt's debut as a leader. The seven-song program, all but one (Billy Strayhorn's lovely "A Flower Is a Lovesome Thing") composed by the leader, finds the pianist in the company of her husband on bass, trumpeter Lex French, and drummer Jim Doxas.  The trumpeter hails from New Zealand but moved to Montreal in 2016 and is making a name for himself. Doxas should be well-known to American audiences having worked and recorded with his tenor sax-playing brother Chet in the quartet known as Riverside with Dave Douglas and Steve Swallow.  What stands out most while listening to this music is how well the quartet plays together; they listen to each, respond, push a bit, never losing sight of the leader's goal which is to celebrate the melodic and harmonic aspects of each piece without ignoring the rhythmic possibilities.
Several of the tracks will bring to mind the "open-air" music of Kenny Wheeler––certainly the title track which opens the album does.  The piece takes its time cycling through the melody before French takes his solo. He wraps his notes around the richly melodic bass and the spare piano chords. Some of his smears sound like those of the late Lester Bowie.  Ms. Wyatt's solo rolls forward atop interactive drums and thick, foundational, bass lines.  Later in the album, "Antepenultimate" also has tinges of Wheeler.  Still, "Short Stories" is a playful strut with lively walking bass lines and dancing cymbals. There's more playfulness of "Lhotse Face"––listen below at how well this unit works together. 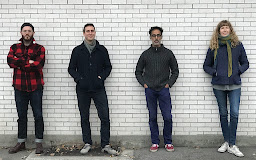 The ballads on the album are excellent.The Strayhorn song is quite lovely; French "sings" the melody and, after Vedady's handsome spotlight and Ms. Wyatt's sweet melodic adventure, creates a splendid solo of his own.  "Underwater Chant" is slower yet contains a full melody, more lovely trumpet, fine counterpoint, quiet yet "just right" drum and cymbal work. Even so, French's solo is quite playful as if he is trying to cajole the band into following him (they don't and he comes back to the fold). He does set the tone for the piano spot.
The program closes with "Duet", another delightful melody and, surprisingly, featuring all four musicians. Listen to how the music skips like a young person on a sunny Spring day, full of life and energy, ready to take on the world.
"Artifact" is a delightful debut album, filled with melody, spirit, and a joy for playing together that gives the listener hope, hope that music can bring our world back from the brink of madness.  I'm glad that Kate Wyatt finally found the time to get her music recorded because this album is a gem. Highly recommended!!
For more information, go to www.katewyattpiano.com/. To hear more and purchase the album, go to
https://katewyatt.bandcamp.com/album/artifact.