String quartets are usually not the bailiwick of this blog but there have been a slew of new (and, to be fair) older recordings that have caught my fancy in recent months.  In June, it was the massive seven-CD box set of the collected string quartets of Wadada Leo Smith (still working my way through that) as well as the brilliant three-CD solo violin set from Johnny Gandelsman's "This is America" which led me back to listen to his work with the Brooklyn Rider string quartet. 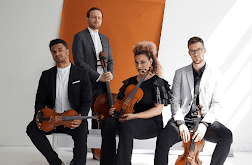 Around the same time, I became aware of PUBLIQuartet, a string ensemble founded in 2010 and based in New York City.  Composed of Curtis Stewart (violin), son of tuba master Bob Stewart, Jannina Norpoth (violin), daughter of Detroit-based music master A. Spencer Barefield, Nick Revel (viola), and Hamilton Berry (cello), the string quartet pushes at the boundaries and prejudices about 21st-Century classical music inspired by the work of Kronos Quartet, Roscoe Mitchell, Caroline Shaw, and many others.  Among their projects is "Mind| The| Gap|" which brings diverse musical material from folk, blues, pop, and elsewhere and presents them in a new musical light. 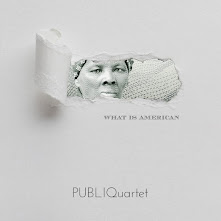 "What Is American" (Bright Shiny Things) is the PUBLIQ's third album and follows in the structure of 2019's "Freedom & Faith" in there are suites, adaptations, new music, and improvisations.  Among the 20 tracks are four short pieces, all sharing the main title "Fifth Verse", that connect the words poet Oliver Wendell Holmes wrote in 1861 that added a verse to "The Star Spangled Banner" to support the Union Cause in the Civil War.  The ensemble opens the program with their take on Antonin Dvořák's "String Quartet No. 12, Op. 96 "American", one of the pieces the Czech composer wrote while in the United States (1892-1895) as the head of the National Conservatory of Music in NewYork City. One can easily hear the influence of Negro Spirituals on the composer while the PUBLIQs use of percussion and voice throughout the four movements underscore that influence. 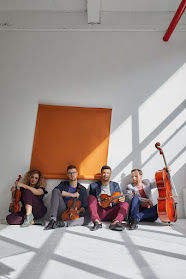 It's a fascinating program.  The quartet play the four-movement "Dig The Say", a piece pianist Vijay Iyer composed for Brooklyn Rider based on the music of the "Godfather of Soul" James Brown. Part of the fun of the piece is just how funky it is but also the introspection built into the second movement. Instrument are used for percussion, there are quick stops, foot stomping, pizzicato, and an overall sense of joy.  There are pieces by Rhiannon Giddens (the powerful blues "At The Purchaser's Option"), Roscoe Mitchell (the enigmatic "CARDS 11.11.20"), and improvisations on works by Fats Waller ("Honeysuckle Rose"), Ornette Coleman ("Law Years" and "Street Woman"), plus the four improvisations that close the album under the title "Wild Women"––they include hand-clapping funk of "Black Coffee" by Tina Turner, the high-powered in-your-face soul of "They Say I'm Different" by the late Betty Davis, Alice Coltrane's ecstatic "Er Ra", and closing with Ida Cox's feisty anthem "Wild Women Don't Get The Blues".
Some might say that "What Is American" is way too ambitious a project––of course it is. It has to be. For as much as the media makes the US look as if it is either right wing or left wing, overall it is way too complex to neatly drop into two sides.  By taking their influences from a plethora of genres, by adding improvisation, voices, and more, this program shows just how diverse this country is. And that's good. That is something we need to remember!  PUBLIQuartet has much on its mind but foremost, they want to use music to educate, entertain, and energize a pandemic-numbed world.
For more information, go to www.publiquartet.com.  To hear more and purchase, go to https://publiquartet.bandcamp.com/album/what-is-american.
Here's Vijay Iyer's "Dig The Say - 1: Carry the Ball":
Posted by Richard B. Kamins at 5:56 PM