This post is not a review but to tell you about two albums that lovers of small group Creative Black Music should enjoy. 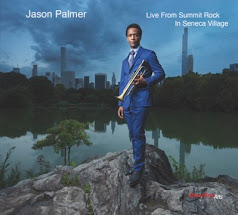 Giant Step Arts, the recording label owned by photographers Jimmy & Dena Katz, sponsored a series of live concerts in Central Park in New York City in late Spring/ early Summer 2021.  They were held on the grounds that once was Seneca Village, an area where a group of free Blacks had established a village in 1825.  Within 20 years, Irish and German immigrants had moved in but the City took the land through eminent domain and everyone was kicked out.  For Juneteenth 2022, Giant Step releases two recordings; the first one "Live from Summit Rock in Seneca Village", features Jason Palmer (trumpet, compositions) leading a group including Mark Turner (tenor saxophone), Edward Perez (bass), and Jonathan Blake (drums).  The quartet plays five pieces, three from Palmer's 2020 album inspired by a number of art works in Boston, MA's famous Isabella Stewart Gardner, one from 2019's Giant Step album "Rhyme or Reason", and one from his 2014 SteepleChase album "Places".
To find out how to purchase the album, send an email to JasonPalmerTrumpet@gmail.com. 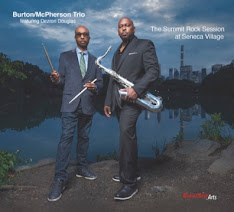 The second release is the Giant Step Arts debut of the Burton/ McPherson Trio with Dezron Douglas.   This album, titled "The Summit Rock Session at Seneca Rock", was recorded on the first day of Summer 2021, features the muscular tenor saxophone of Abraham Burton and drummer Eric McPherson with bassist Douglas.  If you've only heard McPherson with the Fred Hersch Trio, you'll be impressed by the power in his percussive work.  Saxophonist Burton, the drummer's long-time running partner, combines the power of John Coltrane and David Murray with the improvisatory elegance prowess of Sonny Rollins.  With Douglas's rock-solid bass work as its foundation, the concert is a real treat.
To find out how to purchase this album, send an email to abrahamburtonjazz@gmail.com.
To find out more about Giant Step Arts and its mission, go to www.giantsteparts.org/.
Posted by Richard B. Kamins at 5:02 PM