Over the past decade+, pianist Fred Hersch has released solo piano records, several duo sessions as well as a number of trio albums plus a 2019 date with the WDR Big Band.  He continues to explore different facets of his instrument as well as different ways to approach his original music. During the first lockdown of the pandemic, Hersch showed up online playing solo piano in his Pennsylvania home but was already writing charts for piano, bass, and drums joined by a string quartet. In August 2021, the pianist, composer, and arranger entered the studio with bassist Drew Gress, drummer Jochen Rueckert, the Crosby Street String Quartet – Joyce Hamman and Laura Seaton (violins), Lois Martin (viola), and Jody Redhage (cello) – plus, on one track, percussionist Rogerio Boccato.  The results of their two days recording can be heard on "Breath by Breath" (Palmetto Records). 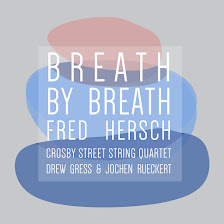 For this project, Hersch composed "The Sati Suite", an eight-part musical adventure based on the pianist's longtime practice of "insight meditation".  The "Suite" opens with "Begin Again", its handsome melody moving atop a Latin-flavored rhythm reminiscent of the late Chick Corea's love of Spanish music.  The string quartet is part of the piece not just background.  The first one-third of the next track, "Awakened Heart", belongs to the strings; with its handsome melody and counterpoint, the music transitions into the composer's solo piano.  The strings return to play a short coda.  The quartet also gets the opening of the title track to themselves before the drums enter and bassist Gress begins his solo. The piano enters, the strings exit, but Gress continues for another 90 seconds. Hersch takes over the solo spotlight pushed forward by the bass and Rueckert's splendid brushes work. 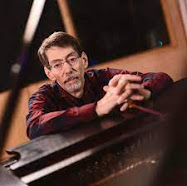 Hersch, who has had a number of excellent trios over his career, continues that tradition here.  Gress, who was a member in the 1990s and the first decade of the 2000s, is back – Rueckert is new to the ensemble and his gentle touch is perfect for this material. He creates such a fascinating atmosphere on pieces such as "Rising, Falling" as well as joining with Gress to really push "Worldly Winds" (listen below) forward.
The ninth and final track is "Pastorale (Hommage A Robert Schumann)", an original that the pianist featured on 2011's "Alone At the Vanguard" and on 2019's "Begin Again" with the WDR Big Band. And why not?  It's one of Hersch prettiest pieces with counterpoint from the bass, a playful middle section with pizzicato strings, a powerful section for the piano, strings, and rhythm section leading back to the piano and bass, then solo piano to the finish (with the string quartet on the last note).
"Breath by Breath" is yet another triumph for Fred Hersch.  With his Trio and the string quartet, one can fall into this music from the the opening notes to the very end. For the avid listener, the reward is that you can go back time and again because these songs are so melodic and the arrangements so intelligent. Enjoy!
Go to www.facebook.com/fredherschmusic/videos/619069642762378 to hear Fred Hersch talk about this album.
Hear "Worldly Winds":
Guitarist and composer Dave Stryker is nothing if not prolific.  In the 1990s and early 2000s, he recorded two dozen albums for Steeplechase Records and, since 2014 for his own label. Stryker has performed in jazz groups, blues groups, big bands, and now, his latest album, "As We Are" (Strikezone Records), finds him fronting a jazz quartet and joined by a string quartet.  It's a "dream" ensemble.  The rhythm section features John Patitucci (bass), Brian Blade (drums), and Julian Shore (piano, all arrangements) with violinists Sara Caswell and Monica K Davis plus violist Benni von Gutzeit and cellist Marika Hughes. 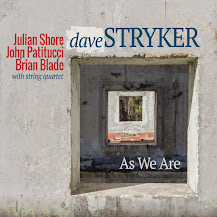 After a short (70 seconds) "Overture" for the string quartet, the band kicks in to Stryker's "Lanes" (six of the nine tracks are composed by the leader, one he co-wrote with Shore, one piece by Shore plus Nick Drake's "River Man"). With the shimmering strings on top, the rhythm section sets a frisky pace and the guitarist plays a delightful solo. Blade steps out for a spotlight that leads into an excellent solo statement from the pianist.  The funky "Hope" has a bouncy feel with the strings moving around the guitarist's melody lines.  Shore, Stryker, and Patitucci each solo and the string quartet  arrangement over the final two minutes is excellent.  Shore is featured on the opening melody of Stryker's "Saudade", a lovely slow Brazilian-inspired piece with deep cello accompaniment from Ms. Hughes in the opening moments.  The guitarist's solo kicks up the energy while the piano spotlight gently rides the waves from the rhythm section and strings. The final minute pays tribute to Tom Jobim with the quiet piano melody above the gentle guitar chords. "As We Were" may be the most mature ballad that Stryker has composed; the richness of the melody, the guitarist's evocation in the last chorus of his solo plus the excellent use of the strings, all make this track stand out on the album
The oft-recorded "River Man" is extremely soulful, especially the emotional work of the leader and the generous colors plus harmonies added by the string quartet.  Ms. Caswell steps out in front for a powerful solo that captures many of the qualities composer Nick Drake imbued the song with, particularly the wonder and the solitude.  Stryker builds off that solo: with his ability to infuse much of what he plays with the blues, the song stays at an emotional high throughout.  The violinist is also a featured voice on the final track, the guitarist's "Soul Friend".  This is more of a straight-ahead blues but make sure to listen to how Shore's arrangement utilizes all the strings.  Stryker's long solo over the driving drums is a sheer delight but stick around for Patitucci's bluesy spotlight with the strings adding counterpoint.
Dave Stryker strikes gold again on "As We Are".  He met Julian Shore two decades ago at the Litchfield Jazz Camp in CT when the pianist was a precocious and quickly maturing 14-year old.  The guitarist's memories of those encounters plus listening to Shore's albums convinced Stryker that the now 35-year old musician was the right person to arrange these pieces.  Adding Messrs. Patitucci and Blade to the mix as well as the smashing string quartet makes this recording stand out among new releases.
For more information, go to www.davestryker.com/wp/.  To hear more and to purchase the album, go to  https://davestryker.bandcamp.com/.
Hear "Lanes":
Posted by Richard B. Kamins at 10:34 AM