Music for When One Needs Healing

At a time when the entire world is on tenterhooks, tragedy strikes quickly and sharply. My sister died in the hospital on Wednesday the 8th, not from the virus scrubbing away at our communities but from complications with her heart. The worst part was not being able to visit her in her final hours as the facility was, and remains, on lockdown.

In the past, when a family member or close friend died, it's been the solo piano music of Keith Jarrett, the compositions of Erik Satie, or the "Cello Suites" of J.S. Bach (Yo-Yo Ma or Pablo Casals plus Johnny Gandelsman's brilliant adaptation of the pieces for violin) that I would turn to.  Last week, it was the new album from the trio Gilfema, an album I was preparing to review, that helped me get through.

The trio – Lionel Gilles Loueke (guitar, vocals), Ferenc Nemeth (drums, vocals) and Massimo Biolcati (acoustic and electric basses) – first met at The Berklee College of Music two decades ago. Several years later, all three went on to the (then) Thelonious Monk Institute of Jazz in Los Angeles, CA.  Returning East to New York City, the trio wrote and performed music, signed to ObliqSound Records, releasing their eponymously-titled debut album in 2005.  "+ 2" followed in 2008 but when Loueke signed with Blue Note, the trio took his name, recording a series of albums while the guitarist toured with Herbie Hancock plus appeared on albums by Jack DeJohnette, Terence Blanchard, Esperanza Spalding, and many others. 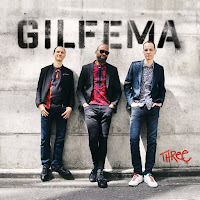 "Three" (Sounderscore Records) is the trio's first "official group" album in 12 years and the musicians seemed as locked in and "free" as ever. The 13-song program builds off their ability to all be rhythm player as well as melodicists.  Check out the open track "Têkê", how the melody builds off the dancing high-hat and the burbling bass, the West African melody plucked out by the guitar, and then, the music takes off on the strength of the multi-tracked guitar.  Yes, it's Loueke's song, he's got the lead role, but this music needs the rhythm section to make it whole.  Hear what the trio does to Jimi Hendrix's "Little Wing" (see and hear below) –– the melody is first played by Biolcati (acoustic) before Loueke takes over. Yet, the guitarist is quite active in the opening minute.  The splendid percussion, the fundamental bass lines, all combine to keep one alert to how the trio makes this song its own.

Try sitting still during Nemeth's driving "Happiness" and while the drummer leads in "Algorythm and Blues" (co-written by Loueke and Biolcati).  The latter track's groove evokes The Meters and The Neville Brothers Band, so much so you expect to hear snatches of New Orleans patois sung in the background.  The guitarist and bassist also collaborated on the eminently danceable "Brio", the joyous West African groove sparked by Loueke's rippling guitar, Biolcati's bouncing bass lines, and the Caribbean-drum approach of Nemeth.

Loueke's "Dear J.L." is a spare ballad, with a long, flowing melody section, quiet percussion, and melodic bass accompaniment.  The guitar solo builds smartly off the melody and the electronic effects plus Loueke's soft vocal paint a gentle portrait. The album closes with Biolcati's "Until", his overdubbed bowed bass chordal drone under Loueke's processed guitar melody creating a impressionistic setting. The bassist solos first (over his bass choir) before he and the guitarist play counterpart over the drone and soft hand-held percussion.

Why is "Three" so therapeutic for this writer in his time of mourning and remembrance?  Maybe because my favorite music comes from the idea of dance, rhythms, pushing you, dragging you out of yourself –– Maybe it's the fact that Gilfema is a group made up of friends, musicians who have stayed in touch with each other, played regularly, and enjoy pushing their own boundaries. The joy I feel with Bach's "Cello Suites", the searching that created John Coltrane's " A Love Supreme", the gentle moments of Maria Schneider's "Sky Blue", all elements that also appear on "Three".  The right music at the right time and, if you are already in a good mood, this music will heighten that mood as well. Just sit and listen.

For more information plus to purchase, go to https://gilfema.bandcamp.com.

Here's the trio's lovely the on the Jimi Hendrix ballad: