Alto saxophonist and composer Alex LoRe is an impressive young musician.  Moving to New York City after completing his undergrad studies at The New England Conservatory in Boston, MA., he did his grad work at the Manhattan School of Music. LoRe studied with and was tutored by saxophonists such as George Garzone, Lee Konitz, James Moody, and Steve Wilson plus has appeared on stage with the likes of Dave Liebman, pianists Aaron Parks and Dan Tepfer, trumpeter Ralph Alessi, and drummer Ari Hoenig.  He is a member of fellow reed player Lucas Pino's No Net Nonet and has recorded with the DanJam Orchestra and fellow saxophonist Paul Jones.  He's released two albums on Greg Osby's Inner Circle Music, the first (2014) a trio date and the second (2016) with a quartet that featured bassist Desmond White, pianist Glenn Zaleski, and drummer Colin Stranahan (who, like White, also appear on the earlier CD).  What impressed this listener about those albums was the amount of space in the music, the excellent melodies and arrangements as well as the interactions of the musicians involved.  Also, LoRe's influences come from myriad sources, classical to jazz and beyond. 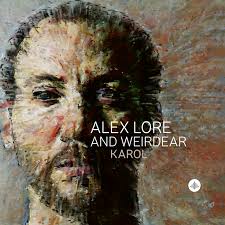 "Karol" (Challenge Records) illustrates the influence of classical composers and performers with eight of the 12 compositions dedicated to classical composers.  They range from J.S. Bach to 16th Century Spanish composer Maddalena Casulana to Henry Cowell to Julius Eastman to Karol Symanowski.  His quartet (with drummer Allan Mednard replacing Stranahan) now has a name – Weirdear – and, even more than on his previous two albums, seem to be more involved in the creative process.  There is sensitivity, swing, and melody that moves in and out of many of these pieces including the opener "Skyward."  The song, not dedicated to any composer in particular, gives the entire band a chance to step out.  In this instance, it's Zaleski's handsome piano leading the way into the song then doubling the melody line with the alto saxophone.  White and Mednard are quite active in support of solos – it's as much fun to concentrate on their efforts as it is to listen to the pianist and alto saxophonist.

LoRe does an excellent job in their liner notes explaining the influence of each composer on the particular composition.  It's the use of rhythm and the complex harmonies of Igor Stravinsky's "Symphony for Wind Instruments" that inspired "Orahcle" while it was Charles Ives use of "Americana" melodies that sets the tone and direction of "Casey Jones".  But, notice the clear-as-a-bell tone of the alto saxophone, the dancing march-inspired rhythms from the drums and bass, and the strutting piano lines on the latter. The listener should be entranced by "Light" with its three chorales for soprano saxophone and piano.  This tribute to Johann Sebastian Bach leaves room for short improvised phrases by the saxophonist as well as freedom for the rhythm section throughout. "Eastman" is inspired by composer-pianist Julius Eastman (1940-1990) whose work was dubbed "post-minimalist" and really shook the contemporary classical music scene in New York in the late 1970s and early 80s.  Eastman was not afraid to speak of racial injustice and issues within the gay community.  LoRe treats his subject to a lovely melody, pushed forward by the fine brushwork of Mednard; he also adds the tenor saxophone of George Garzone. Their interactions are like a conversation in poetic verses, sometimes rhythmical, other times lyrical, all without tension or dispute. 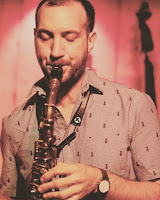 The title track, dedicated to Polish composer Karol Symanowski (sp – the last name should contain a "z" – Szymanowski) who was born in 1887 and died in 1937.  His music changed a great deal over his composing career (approximately 23 years) ranging from pieces influenced by Wagner and the "Romantics" to creating his own "voice" with the use of "folklore" plus innovations in his compositional techniques that placed the composer in the "Modernist" camp. LoRe's piece is a distillation of those different voices with echoes of Stravinsky and Satie mixed with the approach of Jimmy Giuffre, especially at the period when that composer began to move from his "Americana" sound into a "freer" phase.  The quartet moves through various sections with ease and a sense of curiosity as well as with a forward motion created by the excellent playing of Mednard and White.

"Karol" also contains three "Miniatures", short compositions (between 2:25 and 2:36) in which melody and improvised are juxtaposed.  These cuts are exercises in economy and expansion, melodic structure and improvised rhythms, individual voices and collective sound.  In fact, the entire album is filled with examples of those exercises writ large; pieces that are organic and open to interpretation.  In a word, the playing is splendid.  Alex LoRe continues to create music that is involving as it is evolving, free of clutter and cliché, rich with possibilities.

For more information, go to alexlore.com.

Here's the opening track recorded live in December 2018 (two months after the recording session for the album):

Time has a way of erasing years even as it fills our memories.  It's been 20 years since pianist, composer, and arranger Guillermo Klein recorded the first album by his 11-piece ensemble Los Guachos.  Sunnyside Records released "Los Guachos II" ("I" was scrapped) in early 1999 – listeners were introduced to a sound that blended elements of the composer's Argentinean upbringing, his study of American jazz, and more.  Amazingly, the personnel (see below) has only changed slightly over the decades while the musical explorations continue to evolve and expand. 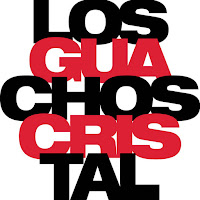 "Cristal" (Sunnyside) is the eighth Klein album to feature Los Guachos (the Orphans) continuing the composer's quest to meld his native country's older popular music and dance rhythms with a more modern approach.  On this recording, melody s just as important as rhythm. There are certainly of fine solos yet one should pay attention to the multitude of colors created by Klein's writing for the various sections. The program opens with an interpretation of "Melodia De Arrabal" – composed in 1932 by the extremely successful Argentinean duo of Carlos Gardel and Alfredo Le Pera, the song served as the title tune of a 1933 movie.  This modern take is actually a rearrangement of a rearrangement that Klein created for saxophonist Joshua Redman and the modern string quartet Brooklyn Rider.  The newer take accentuates the handsome melody line and also makes room for Jeff Ballard's brilliant drum work.  Take the time to listen to the blend of rhythm instruments, how the quiet guitar chords are echoed by the piano, and how the rhythms speed up and slow down as if elegant dancers were sliding across the floor in front of the ensemble.

"Burrito Volver" combines a rhythm from Klein's "Burrito Hill" (recorded with Los Guachos on the 2012 album "Carrera" with a reinterpretation of Gardel and Le Pera's "Volver", a tune that also shows up later in the album.  The first tune mentioned features a roaring solo from guitarist Ben Monder while the reeds and brass sway underneath.  The later take is more up-tempo with a dazzling interplay of the reeds and brass, excellent solos, and a powerful rhythm created by Ballard, percussionist Richard Nant, and electric bassist Fernando Huergo.  The three saxophonists – alto Miguel Zenón, tenor Bill McHenry, and baritone Chris Cheek (who is the album and group's MVP) – have wonderful interplay with the brass – trumpeters Taylor Haskins and Diego Urcola plus trombonist Sandro Tomasi.  Zenón takes the lead on "Quien Te Ve", first interpreting the handsome melody and then creating a far-ranging, emotionally rich solo. 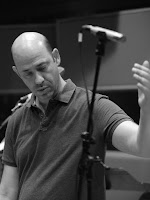 "Cristal" closes with a new arrangement of Klein's "Flores" first recorded on 2005's "Una Nave." The composer's vocal is replaced first by the band working through the verses and then by Cheek's soaring soprano saxophone.  It's a dazzling, swirling, whirling, statement pushed forward by the powerful percussion and melodic bass.  The gentle ending of just guitar and quiet keyboard is a perfect way to let the listener relax and exhale.

Like the finest contemporary composers and arrangers, Guillermo Klein has slowly, steadily, built a repertoire that stands out for so many different reasons.  Los Guachos, formed in the wake of Klein's 17-member Big Van, is a splendid ensemble filled with great individual voices who mesh together making music that often soars while it moves the feet.

"Cristal" will be available on September 27, 2019 – in the meantime, here's a delicious taste:

Step Tempest first posted in December 2009, a month after The Hartford Courant closed down the blogs (including mine) of numerous free-lancers.  Here we are, nearly 10 years later, and much has transpired but my love of, curiosity about, and desire to listen to music and write reviews remain unabated.  I have met, talked to, and heard many of the musicians I have written and continue to write about – their dedication to the music is, for a vast majority of them, remains powerful even as the music "business" continues to reinvent itself.  My productivity slowed a bit in 2010 when I began teaching as an adjunct Professor in the Seminar Series at Quinnipiac University; plus, I was able to develop several courses about the popular musics of the United States, working and learning with students about the origins of what we listen to today.

Above all, I still love this music, a love than continues to grow as the years keep passing by.  It's been over 50 years since I posted my first concert review for the UCONN Daily Campus – wow!  Seems like only a week ago.

Thank you so much for reading and for listening.