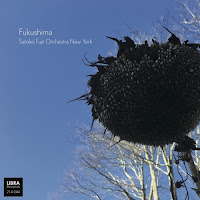 2018 is the year pianist, composer, and arranger Satoko Fujii turns 60 years old and will release an album every month (one may remember Wynton Marsalis doing something similar in 1999, albeit not for his 60th).  This month will see the release of a solo piano recital.  Before we talk about anything brand new, I should look at two of her more exciting 2017 albums.  Early November saw the latest release (and 10th since 1997) by her 13-member Orchestra New York. Titled "Fukushima" (Libra Records), the music is a reaction to the nuclear disaster triggered by an earthquake in 2011.  There were several deaths as well as tens of thousands of people displaced from their homes (in some instances, for more than nine months). The after-effects of the disaster were felt throughout Japan and the Far East. 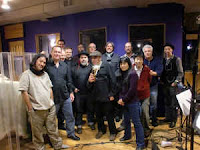 The impressive ensemble - saxophonists Oscar Noriega, Ellery Eskelin, Tony Malaby, and Andy Laster, trumpeters Dave Ballou, Herb Robertson, and Natsuki Tamura, trombonists Joey Sellers, Joe Fielder, and Curtis Hasselbring, plus guitarist Nels Cline, electric bassist Stomu Takeishi, and drummer Ches Smith - do an amazing job bringing this musical five-section story to life.  There are moments when the music is mournful, confrontational, angry, quiet, loud, and emotionally powerful. Section "1" opens with breath, as if the wind was passing through trees or over the landscapes of the city. Slowly, one hears various voices rise out of the ensemble, trumpet, sax, percussion - Cline's "tolling" guitar lines ushers in a new section where various voices move in and around his sound.  The group hits its stride at the beginning of "2" when the rhythm section pushes forward a powerful sure of sound and different soloists rise and fall around  them.  The whole group then plays a powerful counterpoint to Laster's squalling baritone solo - yet, pay attention to Cline, Smith, and especially Takeishi (the bassist really roars underneath).

One is tempted to write about every section of this 57-minute adventure but the best advice is to start at the beginning and listen all the way through.  Then, repeat.  What stands out for you?  Is the power of the "sound"? Is it how the electronics of the guitar and bass push the music into different territories for a large ensemble?  Is it the gorgeous coda that is section "5"?  Chances are that it is all of the above and more.  Ms. Fujii gives voice to the victims, making the power of her music and musicians speak for those who suffered (the majority of section "4" is filled with short solo or duo statements, making the point that all voices should be heard - the full band "blues" that closes the section is extremely powerful as well, giving even more gravitas to "5".

"Fukushima", a tragedy translated into music by Satoko Fujii, is quite a stunning work. The musicians of Orchestra New York left their egos at the door for the sake of the narrative.  Yes, the title of the album adds the weight of expectations to the music but serves as a reminder that composers and musicians live in the "real" world as much as they do in the world of creativity.  Here, those worlds collide and, I believe, we are better for it. 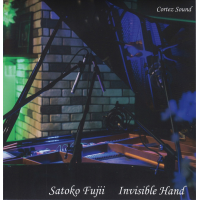 Earlier in 2017, the Japanese label Cortez Sound (named for the Cortez Jazz Cafe in Mito, Japan, approximately 80 miles to the northeast of Tokyo) issued its first album.  "Invisible Hand" is a two-CD recording of the solo piano music of Satoko Fujii.  There are 10 tracks, 87 minutes of music, much of which is improvised. As with "Fukushima", the listener is advised to sit and listen, leaving (if possible) one's expectations aside.  The music covers a great deal of territory, from flowing Keith Jarrett-like melodies to the title track that starts inside of the piano and does not have a true "melody" until 2/3rds of the way through its 13+ minutes. "Floating" is an amazing piece with prepared piano; the power of the pianist's single note phrases and occasional chords plus the marimba-like "prepared" sounds have a meditative feel - watch how the mood and direction changes midway through. This is such a fascinating exploration of possibilities.

In the brief liner notes included in the package, Ms. Fujii writes that she "played total improvisation in the first set, mixed with some written pieces in the second set." The joy of this music is that the listener cannot really hear the difference.  The power of pieces such as "Spring Storm" and "Green Cab" is in the pictures that the pianist paints on (and in) her keyboard (the latter track has a delightful "stride piano" section that may remind some of the work of Myra Melford, who as recorded with Ms. Fujii).

Yes, Satoko Fujii is "flooding" the market with her music and yes, it can be overwhelming. For this listener (who has heard several dozen of her albums with various groups), "Invisible Hand" is one of my favorites. It's true that I like the occasional "clutter" of her different large ensembles and her fascinating accordion work with the Gato Libre quartet: however, this two-disk set is quite entertaining and emotionally satisfying.