Hard to believes it's been over 25 years since bassist, composer, and educator Ben Allison began making an impact on the contemporary music scene.  The New Haven, CT, native was one of the co-founders of the Jazz Composers Collective, a nonprofit organization run by musicians that brought together a number of musicians and composers, put in concerts, began releasing records, and helped raise visibility for musicians such as saxophonist Ted Nash, trumpeter Ron Horton, saxophonist Michael Blake, pianist Frank Kimbrough, and Allison. Soon these musicians began to cross those invisible borders that seem to keep artists apart, whether it's "downtown" versus "uptown", "mainstream"versus "avant-garde."  Groups such as The Herbie Nichols Project and Ted Nash's Double Quartet grew out of the cross-pollination. 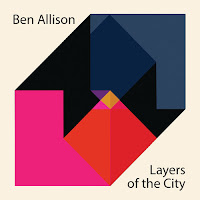 "Layers of the City" is his thirteenth release as a leader (all CDs save for 2016's Newvelle vinyl-only release) and his second on his own Sonic Camera Records label.  Allison wrote music for a quintet he calls Think Free (he used a similar lineup for a 2009 Palmetto lineup with that name) that features long-time friends/associates Mr. Kimbrough and guitarist Steve Cardenas plus trumpeter Jeremy Pelt and drummer Allan Mednard. If you followed the bassist's career as a composer, you know that his songs have strong melody lines, that his wont is to work with textures, and not stretch pieces out too long (this recording has seven tracks and clocks in a just over 41 minutes).  From the opening moments of "Magic Number" to the spacy sounds of the final track, "Get Me Offa This Thing"(which closes with quotes from the title track), one should notice the influence of Miles Davis circa 1958-73 on a good portion of this music.  The opening track quietly rolls in the trumpeter's "In a Silent Way" (actually Joe Zawinul's piece) with the leader's electric bass rolling around the splashing cymbals and quiet piano chords. Pelt's tender trumpet shares the melody with piano and guitar on the ethereal "Ghost Ship" and he also gets the only solo. There are moments that hearken back to Miles work with Gil Evans.

Kimbrough's rolling piano leads in the noir-ish "The Detective's Wife" (note "The Canadian Sunset" riff in the bass on the opening melody) - the pianist really digs into his solo, pushing at the loping rhythms while Pelt, whose trumpet is muted throughout the track, has a nice atmospheric spot before the leader takes a strong solo. The piano solo on "Enter The Dragon" really stands out as Kimbrough starts out playing a angular "boogie-woogie" line before flying all around the keys.  The trumpet and guitar keep the foundation, playing at half the tempo of the drums, piano, and bass.

Cardenas is a stalwart, whether he is dancing around the fretboard as he does on the title track (check out the powerful bass line as well).  The guitarist gets so much out of every note, never rushing a solo; he even seems a bit behind the beat on "Blowback" and that tension works well as Mednard and Allison roil below him. Pelt also offers an understated yet impressive solo on the track.

Ben Allison composes such fascinating music, knows the strength of his musical partners, and gives material to dig into and get lost in.  "Layers of the City" is, at turns, powerful, soothing, rollicking, mysterious, noisy, and adventurous.  While you hear the Miles influence on a number of tracks, you can't help but hear this as Ben Allison music and that, dear reader, is a very good thing.

For more information, go to benallison.com.

Here's a live take of the title track: 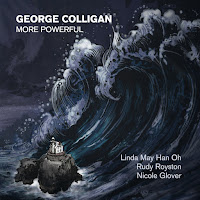 Pianist, composer, and educator George Colligan is not joking around; his new album, his 28th!, is titled "More Powerful" ands is his debut for Whirlwind Recordings.  Check out the rhythm section. Linda May Han Oh is the bassist and, her partner in the most recent vintage of the Dave Douglas Quintet, Rudy Royston is the drummer - need I write more.  Saxophonist Nicole Glover (tenor and soprano), a  former student of the pianist, plays on five of the nine tracks and is more than up to the task.

The opening track, "Whiffle Ball, comes out of the gate more like a Nolan Ryan fastball than its plastic namesake.  Ms. Glover, on soprano, digs right in and rides the powerful waves from the rhythm section. Colligan plays with such joy as if he'd been set free after years of confinement yet he always plays with great passion.  "More Powerful Than You Can Possibly Imagine", from whence the album derives its title, opens with Ms. Oh strumming by herself before the piano and drums enter leading to Ms. Glover, here on tenor, plays the melody.  The leader gets the first solo, playing with abandon in the style of McCoy Tyner.  Ms. Glover is no pussycat either as her solo is quite ferocious. There's a fascinating "free" section before the quartet returns to the powerful theme section. 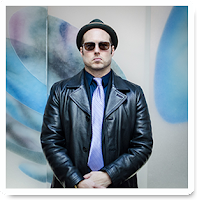 Not every track hits like a sledgehammer.  There are three songs in a row that take slower paths. "Retrograde Pluto" is a handsome ballad for trio.  The melody shines but make sure to listen to the excellent melodic bass solo (Royston literally skips underneath) followed by a thoughtful piano spot. Every time, the piece threatens to pick up in energy, the pianist reigns in the trio, keeping the focus on the melody nature of the music. The following track, "Southwestern Silence", has a similar feel in its singable melody as well as a splendid solo from both Ms. Oh and Colligan. Ms. Glover joins in on tenor for "Empty", a piece with a bit more energy. In fact, by the end of the performance, the rhythms are roiling, the pianist is playing very powerful chords, and the saxophonist is squalling.
"The Nash" brings the album to a splendid close. The piece has a circuitous melody line which Ms. Glover (on soprano) plays with delight while Colligan dances around her.  Ms. Oh again gets the first solo before the pianist goes on a splendid romp, goosed right along by the heart-pumping drums. Ms. Glover enters with a series of short notes; then she and Royston create a storm of their own that will make you jump from your chair.  After the piano and bassist re-enter, the saxophonist keeps going. She dives back into the playful main theme then rolls on to the close with fire and determination.

I suppose it's possible to get overwhelmed by the power of the music produced by George Colligan and his impressive band.  Speaking for myself, every time I put this recording on, I get energized (dangerous to listen to in the car though as the music makes the car go faster - go figure).  "More Powerful" may be one of the hardest-hitting contemporary jazz records you'll hear this year.  Let it roar!

For more information, go to georgecolligan.com.