For those of us who came off musical age in the 1960s and believed that John Coltrane and Miles Davis were the twin giants of jazz, the people involved with the AACM (Association for Advancement of Creative Musicians) did not come to our attention until the next decade.  But the Chicago-based AACM came to life when pianist and composer Muhal Richard Abrams formed his Experimental Band in 1962, an ensemble that included saxophonists Fred Anderson, Roscoe Mitchell, and Joseph Jarman plus drummers Steve McCall and Jack DeJohnette. Abrams, who was mostly self-taught, composed a good amount of the material but everyone mentioned above as well as others started to bring in material to rehearse and then perform.

In 1965, Abrams, fellow pianist Jodie Christian, Kelan Phil Cohran, and several other people signed the letter of incorporation and the AACM began to be a center of learning and performance in Chicago and is still in existence today there as well as in New York City (where many of the musicians moved to in the 1970s and 80s). From those early sessions, groups such as the Art Ensemble of Chicago and Trio Air came into existence as did musical visionaries such as Anthony Braxton, Henry Threadgill, George Lewis, Douglas Ewart, Oliver Lake, Amina Claudine Myers, Nicole Mitchell, Malachi Thompson, and Famadou Don Moye. 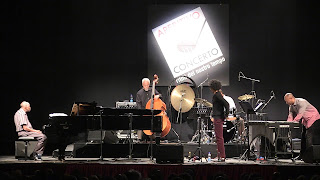 On Friday February 24, Muhal Richard Abrams will bring his Quintet to Crowell Concert Hall at Wesleyan University. Joining him will be the fine young trumpeter (and protege of saxophonist Steve Coleman) Jonathan Finlayson, vibraphonist Bryan Carrott, drummer Reggie Nicholson, and bassist John Hébert.  The music they will play will have its roots in jazz, there will be many moments of improvisation, there will certainly be swathes of tunes that "swing", yet cliches will be absent and it will often seem as if the musicians are conversing with each other in a language based on their own instrumental voices. It's a language the musicians are familiar with even though it changes each time they play and with every song.

Might not make sense to many of us but Muhal Richard Abrams has been navigating these waters for over 6 decades. The NEA Jazz Master, who turned 86 the past September, challenges himself, his fellow musicians, and his audiences whenever he sits down at the piano.

For more information about the concert, go to www.wesleyan.edu/cfa/. To reserve tickets, call 860-685-3355. To learn more about Mr. Abrams, go to www.muhalrichardabrams.com/. Check out the AACM by going to aacmchicago.org.

Here's Muhal with the late Fred Anderson from 2009:

Here's his Quintet in action from February 2016, same lineup as this Friday's concert except Brad Jones is the bassist.