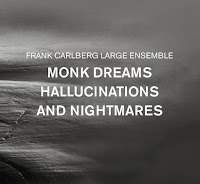 Thelonious Sphere Monk, pianist, composer, and leader, died in 1982 at the age of 64 after a long career that began near the birth of bebop and ended as jazz had splintered into many genres.  His influence is as strong today, if not stronger, as it was in his prime (approximately 1950 - 1970).  Musicians around the world continue to explore his music, digging into the veins of blues and swing that permeated his small yet seemingly infinite repertoire (less than 60 songs).

"Monk Dreams, Hallucinations and Nightmares" (Red Piano Records) is the first full album recorded by the 18-member Frank Carlberg Ensemble (an earlier version of the ensemble recorded two songs for the Fresh Sound New Talent 2003 album "The Sound of the New York Underground").  After listening to the recording on and off for the past several months, I truly believe you will not hear a better big band album this year (maybe its equal but none better). Why?  Well, the band is loaded with first-class musicians (listed below) and Carlberg's pieces (the only Monk work is "Round Midnight") are so intelligent, filled with twists, turns, references to and quotes from the master's work that the music sounds contemporary. The rhythm section - Carlberg (piano, Rhodes), Johannes Weidenmuller (bass), and Michael Sarin (drums) - often stirs the pot but also play in ways that cause the music to move in fascinating directions.  So much happens in this music. There's the rambunctious "Dry Bean Stew" that opens the program on a truly playful (listen to how the rhythms shift from march time to swing to post bop to blues and elsewhere).  "Rhymes", which, after the opening bass solo, features the voice of Paul Lichter reading the poem "Rhymes with Monk" by Clark Coolidge. Jeremy Udden (alto saxophone) and David Smith (trumpet) add atmospheric counterpoint. "A Darker Shade of Light Blue" pits snippets of Monk's melody with several instruments flitting around, not as counterpoint but like birds outside the window curious at the sound.  All but the bass and drums drop out as Brian Landrus solos on bass clarinet until the ensemble returns and the piece takes off with the trumpet of John Carlson rising out over the powerful rhythm section.

Vocalist Christine Correa joins the band on "You Dig!", a piece that takes its inspiration and lyrics from the Monk quote "You've got to dig it to dig, you dig?" Powered by Sarin's rambunctious drums and Weidenmueller's rollicking bass line, the performance an explosive alto sax solo from John O'Gallagher.  Ms. Correa is also featured on "Always Night", it too inspired by a Monk quote, "It's always night or we wouldn't need light". As the vocalist sings, trumpeter Carlson dances around her as the band moans and Carlberg's Rhodes pours notes down like rain.

The program closes with Monk's "Round Midnight"; this impressive arrangement could be subtitled "Concerto for Knuffke" as Kirk Knuffke's expressive cornet is the main voice throughout the 11 minutes.  Listen to how the leader arranges the "voices" in the different sections, looking for lightness from the reeds and depth from the trombones, to how Sarin dances about beneath the rhythm, which is suggested by the piano and bass.  And the solo is just fascinating.  Conversational, angry, playful, emotional, sad, all that and powerful as well.  There are moments when the piece sounds like Miles Davis working with an arrangement by Gil Evans in that genre disappears and it's really pure music (to these ears).

"Monk Dreams, Hallucinations and Nightmares", despite its title, is an uplifting set of music, a 70-minute program that keeps on giving each time you listen.  Frank Carlberg channels the spirit of Thelonious Monk but does not imitate or rearrange his melodies.  This is "inspired" music of the highest order and the Frank Carlberg Large Ensemble fires on all cylinders.  Wow!

For more information, go to www.redpianorecords.com/releases/.

Here's an introduction to the album: 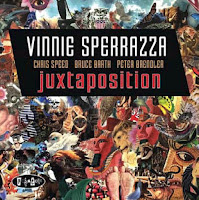 Drummer and composer Vinnie Sperrazza has a new album; "Juxtaposition" is his ninth as a leader or co-leader and first for Posi-Tone Records.  While known for his powerful playing, Sperrazza also has a gentle, melodic, side and is not afraid to sublimate his power for the sake of melody.  His quartet on this album includes the fine bassist Peter Brendler, the wonderful pianist Bruce Barth, and tenor saxophonist Chris Speed.  While Barth is, perhaps, best known for his impressive "swing" as a leader as well as in bands led by Terence Blanchard, Tom Harrell and Luciana Souza and Speed has played in "modern" settings such as the Claudia Quintet, Jim Black's Axis No Axis, and Michael Formanek's Ensemble Kolossus, here they come together to make a cohesive ensemble dedicated to playing material that challenges as much as soothes the listener. 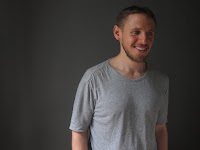 The 12-song program consists of nine originals and one piece each by James Williams, Tony Williams (no relation), and Leonard Bernstein.  "This Night, This Song" comes from the Tony Williams Lifetime "Turn It Over"; no vocal here as on the original but Speed's tenor leads the way, caressing the melody while the leader gently drives the piece. Pianist William's "Alter Ego" has a sweet blues-soul feel, nobody's in a hurry, and the solos sing, especially Barth's rolling piano lines.  "Somewhere", the beautiful Bernstein melody from "West Side Story", is an emotionally rich ballad with a vulnerable solo from Speed, spare but supportive bass notes and lines, Barth's sparkling piano, and Sperrazza's splendid brush work. 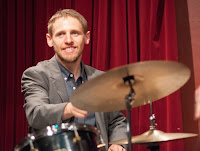 As for the originals, the fun starts with the mid-tempo opener, "Chimes", with its "Big Ben" like opening - it's a good introduction to the sound of this band, with Speed's deliberate sax lines blending well with Barth's chordal playing, sometimes elaborate, sometimes spare (his solo on this tracks is delightfully colored by the blues). Brendler and Sperrazza offer the perfect support, pushing or prodding the soloists and just digging into the groove.  "St. Jerome" is a bouncy song, with the piano gleefully riding atop the bouncy bass and dancing drums.  Barth and Sperrazza lock in on "One Hour" - their interactions during the piano solo are fiery. The drummer really flies beneath Speed's powerful solo. The drums lead in "Warm Winter", a bop-ish piece with a melody that feels like a Charlie Parker riff.  Brander's delightful solo leads into an expansive solo from Barth, one with phrases that swirl like leaves around the driveway.

The ballads Sperrazza created for the project include the country-ish "House on Hoxie Road" (sweet melody and fine brush work) and the impressionistic title track which opens with just Barth and Speed - when the rhythm section enters, the piece moves forward at a slow pace, Brendler acting as counterpoint while Sperrazza skitters around the band. There's an "open" quality to the sound of "Hellenized", no clutter but a gentle swing and smart interaction plus a heartfelt tenor solo.  The gentle touch of the brushes guides Speed through the melody of "Solitary Consumer"; the bassist takes the first solo and once again displays his melodic chops. Barth's solo is short and delightfully conversational as it leads into Speed's more melancholy statement.

This album is a treat from start to finish, which is the best way to listen.  There are moments when the music feels like a John Coltrane date from the late 1950s and a bit like Thelonious Monk in the deliberate way in which the melody is played on several tracks.  The mix of Vinnie Sperrazza, Peter Brendler, Chris Speed, and Bruce Barth works well together, each plays to his strength while also being attentive to the others.  Delightful music that calls for repeated listens, that is the joy of "Juxtaposition."

For more information, go to www.vinniesperrazza.org.