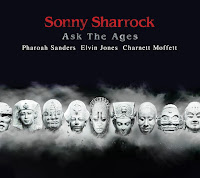 When Axiom Records released Sonny Sharrock's "Ask The Ages" in 1991, no one thought it would the last recording released by the guitarist before he passed in 1994. By the time of its release, Sharrock had been on the contemporary music scene for over 2 decades leading his own bands as well as recording with Miles Davis, Herbie Mann, Don Cherry and with saxophonist Peter Brötzmann, drummer Ronald Shannon Jackson, and bassist Bill Laswell in Last Exit.

"Ask the Ages", co-produced by Sharrock and Laswell, featured the great Pharaoh Sanders (tenor and soprano saxophones), the amazing Elvin Jones (drums), and the mighty impressive 24-year old Charnett Moffett (bass).  Laswell has re-mastered and "enhanced" the original and re-issued the disk on his M.O.D. Technologies label.  It's such a fascinating collaboration, a true fusion of styles that touches on the blues, jazz, the Grateful Dead ("Who Does She Hope To Be" reminds this listener of the best of The Dead's jams), plus the guitar approaches of Carlos Santana and John McLaughlin.  Jones, who was the power source in the John Coltrane Quartet, plays the same role here, really pushing the proceedings on pieces such as "Promises Kept" and "Little Rock." Moffett is not only rock solid but also quite adventurous.  His bass lines are never predictable, pushing the music forward and playing counterpoint to both the guitar and saxophone.  As for Mr. Sanders, he plays with tremendous fire; his soprano work on "As We Used To Sing" soars and roars yet is quite elegant on "Who Does She Hope.."  He tears the heart out of the speakers on "Promises Kept" with his frenetic tenor wails.

Sharrock plays with sense of righteous fury (as he usually did), hurling powerful riff and riff throughout this program.  He often overdubs several guitars and that's used to great effect on "Many Mansions" when he creates a drone-like sound in both ears while he shreds away in the middle over the rampaging drums.  In the same song, the guitarist also shows he's capable of melodic invention as he comes out of fiery spotlight.  Sharrock, even at loud volume, can be quite melodic - note the handsome melody of "Once Upon A Time" which over and over above the thunderous drums.

"Ask The Ages" feels timeless. Yes, the music reflects the turmoil of the 1960s and the advancements made by Messrs. Coltrane and Sanders but this quartet is not interested in "playing the past" as much as being in the moment.  Great sounds and sounds great - for more information, go to www.mod-technologies.com.

By now, it's easy to hear that Segal composes with these musicians in mind. The blend of tenor sax and bass clarinet on "Ordinary Matter" sets off the quiet guitar solo just right while Conly's counterpoint is so intelligent.  Brown, who can drive with the best of them (and does on a number of these tracks), plays with finesse, stepping out for the dialogue between the reed players and laying a soft cushion of sound underneath the guitar.  His gentle introduction to "Strange Matter" sets the tone for the work, a slowly unwinding ballad with such a handsome melody.

The hard-rock of "Vortex" features quite a funky beat and chunky guitar chords. Conly thumps out the beat on bass while Brown kicks nice and hard.  Segal has got the "chops" but rarely plays to show off - in fact, there are many times he gets "right down" with the rhythm section.  He also gets to play around a bit. A huge fan of The Beatles, he closes the program with a lovely take on "Sun King".  Sans reeds, he and the rhythm section stretch out, not rushing but enjoying the mood and their interactions.

Both Sadigurky and Irabagon get to shine on various tracks.  Dig both the high-powered soaring clarinet on the opening track "Faint Memories of Home" and the strong solo on "Patiently Waiting", the "dark reed" feeding off the energy of the rhythm section.  The tenor saxophonist shows his melodic side on "Vortex" yet still manages to "rock out" with the band and is wonderfully soulful on "Ordinary Matter."

Still, this is Gene Segal's story being told through his compositions and his musicianship.  The freedom inherent in these "stories" imbues the music with a "lighter" feel with interactions that feel natural, not forced.  The guitar playing is facile but not so "technical" that the listener is impressed by speed or agility. No, Mr. Segal is, philosophically, more like Bill Frisell and Jim Hall in that melody, feel and groove stand out.

"Matter" was issued in early Fall of 2015 amidst a flurry of exciting new releases.  Don't lose sight of this fine recording by Gene Segal and his excellent band and make sure to look for his other 2 fine CDS. For more information, go to www.genesegal.com.

Israeli-born guitarist and composer Gilad Hekselman has been a busy musician since moving to New Yotk City in 2004  He has shared stages and recorded with the likes of saxophonist Mark Turner, drummer Jeff Ballard, bassist Esperanza Spalding, and trumpeter John Raymond (who has a new CD coming later this month with Hekselman that is quite smashing).

"Homes" is his 5 CD as a leader and 2nd for the Jazz Village/Harmonia Mundi label.  The program features his long-time rhythm section of bassist Joe Martin and drummer Marcus Gilmore (Martin has played on all 5 and Gilmore on all but the guitarist's debut).  Ballard appears on 2 cuts, the bouncy "Keedee" that has both drummers dancing together joyously beneath guitar and bass. Gilmore sits out the Pat Metheny tune "Last Train Home" while Ballard lays down a playful rhythm. Martin's bass lines bounce right along and the guitarist caresses the handsome melody.

Although the album and a number of the song title have to do with "home" (with several exceptions including the delightful take on Bud Powell's "Parisian Thoroughfare"), this is music that will take the listener in may directions. The beautiful take of Baden Powell's "Samba Em Prelúdio" allows one to luxuriate in the melody (the bass counterpoint is just as melodic and the brush work whisper-soft). Hekselman's "Verona" is also a ballad with a more powerful backbeat and a melody line that builds in intensity until Martin's solo calms down the band.  The guitarist does ratchet up the energy (certainly Gilmore reacts to it with his explosive percussion) but never gets out of control.

The original "Cosmic Patience" is the longest track on the disk (11:16); it has the feel of one of Jimi Hendrix's more contemplative guitar explorations, the overdubbed lead guitar using over the rich chores and countermelodies provided by the second guitar and certain effects.  Hekselman plays throughout yet never overstays his welcome - the following track, "Eyes to See", has a fascinating Chopin-like chordal structure and a melody that begs for words. Even prettier is "Dove Song" (related  in a rhythmic way to the Powell piece) with Martin's expressive bass work and Gilmore's brushes painting quite a fine backdrop for the lovely solo.

"Homes" is a such a warm blanket of sound to wrap around you in the colder weather and a sweet cool breeze during hotter times.  The musicians are so simpatico, it feels like one is sitting right next to them as they play. Gilad Hekselman is certainly a much sought-after musician and he continues to grow as a composer and bandleader.   For more information, go to www.giladhekselman.com.