In the 6+ years since coming out of a medically induced 2-month coma caused by the onset of sepsis after a severe bout of pneumonia, pianist-composer Fred Hersch has been extremely busy.  He has created an a jazz/theater piece titled "My Coma Dreams", issued a live solo recording (from his week-long residency at The Village Vanguard in 2010, released 3 CDs with his Trio, a duo recording with guitarist Julian Lage, and has created a new theater piece titled "Room of Light."  He's also produced a number of CDs including the first 2 efforts by pianist Nick Sanders.

In October 2015, Fred Hersch turns 60 years old and is celebrating by releasing "Solo" (Palmetto Records). Recorded live in August 2014 in Windham, NY (140 miles due north of New York City), the 7-song program runs the musical gamut from originals (2), a medley of 2 pieces from Antonio Carlos "Tom" Jobim, a wondrous re-imagining of Juan Tizol's "Caravan", a heart-stopping, heart-breaking, reading of Jerome Kern's "The Song Is You", the obligatory but not desultory Thelonious Monk song ("In Walked Bud"), closing with an emotionally rich reading of Joni Mitchell's "Both Sides Now."

One imagines that Ms. Mitchell's lyrics really resonate with the pianist, verses such as "But now old friends are acting strange/They shake their heads, they say I've changed/Well something's lost, but something's gained/In living every day."  Yet, Mr. Hersch does not create a vapid performance or try to pull out new meanings; instead, he caresses the melody in the first few verses and then stretches out, coming back to the melody for a gentle finish.

Of the 2 originals, "Pastorale" was on his previous solo recording.  Dedicated to composer Robert Schumann (1810-1856), the music manages to sound jazz and classical music at the same time, moving aways from and back to the original melody and chords with a delicate intensity.   "Whirl" was the title track of the pianist's 2010 Trio CD, the first recording after his recovery.  Composed as a tribute to ballerina Suzanne Farrell, the work has great drive, a tour-de-force with out sounding forced.

As I sit on our back porch, with the playful sounds of "Caravan" punctuated by bird songs, it's easy to feel safe wrapped in the warm sounds of "Solo." The world beyond the street on which our house is located is often dark, occasionally dangerous and can be fraught with anxiety.  The music of Fred Hersch gives this listener hope, the possibility that art - in this instance, music - can lift one above the fray, if only for an hour or 2.

For more information, go to www.fredhersch.com.

Guitarist/composer Mary Halvorson continues to surprise and amaze listeners.  She leads or co-leads a number of ensembles while playing with a number of creative artists ranging from Anthony Braxton to Ingrid Laubrock to Jacob Garchik to Stephan Crump and beyond.

Her new CD, "Meltframe", is her 5th for Firehouse 12 Records and her first solo recording. There are no originals in the 10-song program, the guitarist choosing to blend works by well-known jazz composers (Duke Ellington, Ornette Coleman, Roscoe Mitchell, MyCoy Tyner,Carla Bley, and Oliver Nelson) with lesser known contemporaries such as Noël Akchoté, Tomas Fujiwara and Chris Lightcap.  Those listeners who know that Ms. Halvorson can "shred" with the best of them will not be disappointed. The album opens with a rousing reading of Mr. Nelson's "Cascades" that hews close it the melody until the guitarist takes its apart during the solo.  Although Mr. Lightcap's "Platform" starts quietly, the music takes a quick pivot to the outside, with chords one might hear from Neil Young with Crazy Horse. 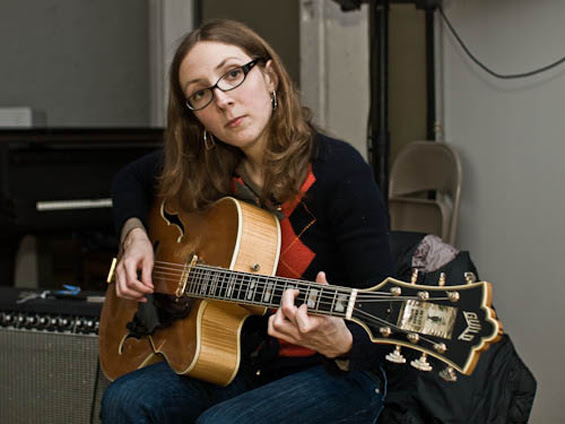 There are several transcendent works on the album including the prayer-like reading of Mr. Ellington's "Solitude", a John Fahey finger-picked approach to Mr. Coleman's "Sadness", and an Andulusian-inspired reading of Annette Peacock's "Blood."  Mr. Mitchell's "Leola" sounds as if the song was written for the late Lou Reed while Mr. Tyner's "Aisha" gets a gentle approach until the piece explodes, then immediately returns to its quieter self.  Yet the solo section has a skewed feel, the bent notes and rapid-fire phrases disassembling the melody and stripping away any of the excess emotional content, reminiscent of the work of the late Kurt Cobain. There is also a progressive rock feel to the opening half of Mr. Fujiwara's "When" (whose group The Hook Up the guitarist has been a member of since its inception); when the piece slows down, Ms. Halvorson breaks the melody down into fragments.  "Ida Lupino" (one of Carla Bley's earlier compositions) gets a Bob Dylan treatment without sacrificing the melody (listen below).

"Meltframe" is music for adventurous minds, those listeners who enjoy a challenge. Yet, this music is not difficult as much as it is expansive and informative. Mary Halvorson has proven time and again her music follows it own paths, her influences long ago absorbed, her eyes and mind always looking for new landscapes.

For more information, go to www.maryhalvorson.com.

As promised above, "Ida Lupino":