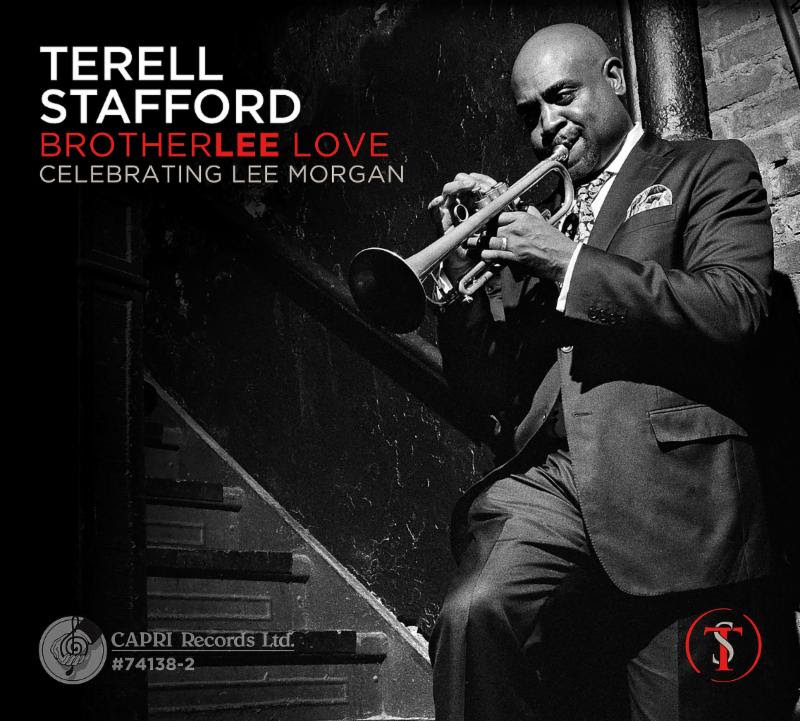 Trumpeter Lee Morgan (1938 - 1972) came out of the creative Philadelphia PA jazz scene like a firecracker. Joining Art Blakey's Jazz Messengers at the age of 18 drew the attention of Dizzy Gillespie who invited the young man to join his Big Band within 2 weeks of his gig with Blakey.  By the late 1950s, Morgan was leading his own groups, had signed to Blue Note Records and was battling the addictions that would follow the rest of his life. But, when he was "right", his inspired playing caught the ears of many people.

Trumpeter Terell Stafford, while not born in the City of Brotherly Love, came of "musical age" in that city under the tutelage of Shirley Scott and Mickey Roker.  Stafford settled in the city, is on the faculty of Temple University and recently established the Jazz Orchestra of Philadelphia. He pays tribute to the music of Lee Morgan on his new CD, "BrotherLee Love" (Capri Records).  Fronting a quintet that features Tim Warfield (tenor saxophone), Bruce Barth (piano), Peter Washington (bass) and Dana Hall (drums), Stafford plays a program that features 7 tunes by Morgan, a sweet piano - bass - trumpet version of Alex Kramer's "Candy" (the title track of Morgan's first release on Blue Note in 1958, and one original from the leader. Morgan's music was usually quite rhythmical much of the time (hard-bop and bluesy ballads), and he played many great solos. That can be said about this project as well.  Right from the opening track. "Hocus Pocus", the listener gets pulled into the music.  The excitement of Hall's drive, Washington's swift walking lines and Barth's active chording creates a fine bed for Stafford's splendid solo and Warfield's rich tenor sounds.  There's no letup on "Mr. Kenyatta" with Barth's strong opening statement setting the table for the melody. Stafford is quite the articulate player, his sound and attack reminding this listener of another Philly native, Clifford Brown. The bluesy swagger of "Petty Larceny" (do I hear a much of "The Pink Panther Theme" in there?) is the perfect vehicle for Warfield's tenor, Barth's two-handed attack, the leader's sly, yet classy, strut. Check out Stafford's fine mute work on the afore-mentioned "Candy" and how he and Warfield caress the melody on the other ballad, "Carolyn." "Favor" is Stafford's contribution to the program and is a "deep blues" that allows everyone but Hall to stretch out.  Pay attention to Barth's brilliant solo, especially how he interacts with Hall to raise the intensity level.

By the time you finish grooving to the final track, Morgan's "Speedball", you'll probably be thinking a couple of different thoughts. First, why don't more people cover Lee Morgan material and second, this is one "hot" quintet. Terell Stafford is a generous leader, making sure every one gets the spotlight. He also makes quite sure that the listener gets his-or-her money's worth.  Honestly, 77 minutes of music seems to go by so quickly.  "BrotherLee Love" is aptly titled and well worth your time.

For more information, go to www.terellstafford.com.

Here's that final track for your listening pleasure:

For his new PosiTone release "Three On Two" (his second for the label), trumpeter Joe Magnarelli and producer Marc Free assembled a splendid quintet, put together a program of originals and standards, then let them loose.  The rhythm section includes Brian Charette (organ) and Rudy Royston (drums) while the front line includes "Mags", Mike DiRubbo (alto saxophone), and the only holdover from 2014's "Lookin' Up", trombonist Steve Davis.  The first 4 tracks are originals with 2 by the leader and one each from Davis and DiRubbo. With the organ burbling underneath and Royston's razor-sharp drumming pushing the beat, the title track "burns" from the get-go.  Davis's "Easy" follows, a sweet shuffle, that's as smooth as barrel-aged bourbon; that tracks leads into DiRubbo's energetic "The Step-Up."  Later in the program, the trumpeter's "Outlet Pass" creates quite a fast break for the quintet, driven by Royston at his best.

Other highlights include John Coltrane's "26-2" and "Central Park West" with the former displaying a real be-bop feel and the latter delivered as a sweet ballad.  On the second cut, Magnarelli blends his mellow flugelhorn with Davis's trombone and the alto sax to not only play the melody but also supply a fine cushion for the organ solo.

The program closes with a very bluesy take of "My Reverie", a piece from French composer Claude DeBussy that's been a favorite of jazz musicians since it was recorded in 1938 by Larry Clinton.  It's a gentle but swinging way to end the show.

"Three On Two" doesn't break new ground but it sure sounds fresh and lively. Everyone plays well, the solos are short but always right on the money, and - really - the rhythm section of Messrs. Charette and Royston can't be beat.   Joe Magnarelli is in good form and even better company.

For more information, go to www.joemagnarelli.com.
Posted by Richard B. Kamins at 1:56 PM