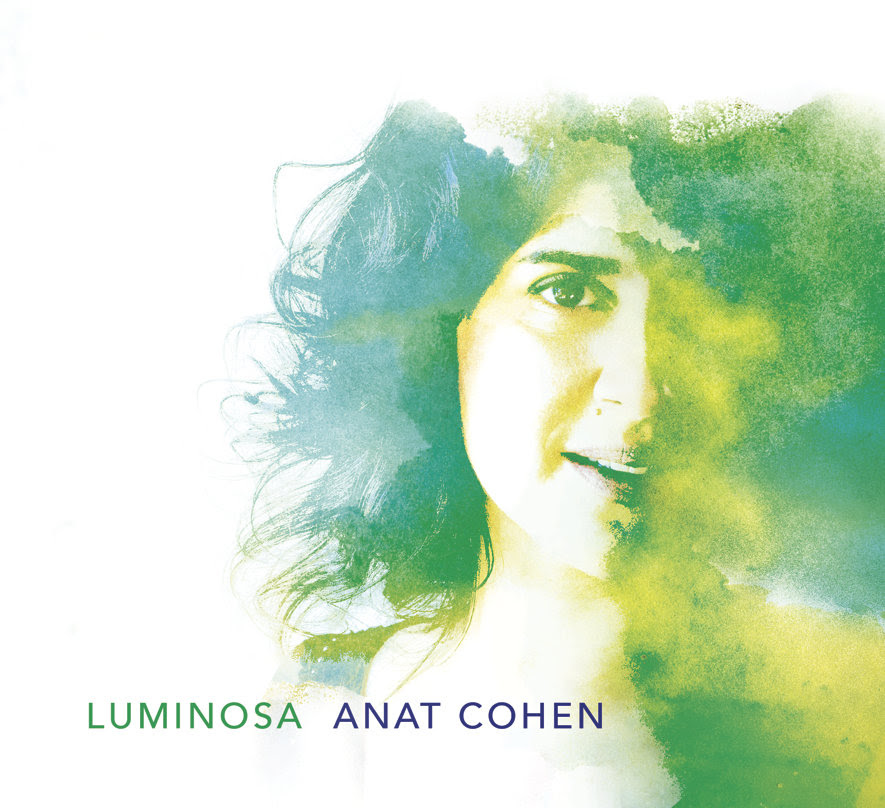 Over the past decade, Anat Cohen has emerged as one of the major voices in improvisational music.  With other artists such as Don Byron, Ken Peplowski, Mike McGinnis and Darryl Harper, she has returned the clarinet to the forefront. Her musical "ears" are quite big, taking in classic American jazz, big band music, Brazilian choro, and so much more.  Ms. Cohen has dedicated her life to making the world brighter through her performances and, if you have ever seen her in person, she does just that.

"Luminosa" is her 7th recording as a leader, all released on her Anzic Records label.   The album features 7 tracks with her "working" quartet of Jason Lindner (piano, Wurlitzer electric piano, synthesizer), Joe Martin (bass), and Daniel Freedman (drums), 2 with her partners in Choro Aventuroso (accordionist Vitor Gonçalves, 7-string guitarist Cesar Garabini, and pandeiro player Sergio Krakowski), a duo with guitarist Romero Lubambo, and a stunning reading of "Beatriz" featuring Lubambo, Martin on bowed bass and threader on bass clarinet. While over half of the program features pieces written by Brazilian composers (including Lubambo's dancing clarinet-guitar duo"Bachiāo"), there's a mostly acoustic version of Flying Lotus's playful "Putty Boy Strut", a lovely original ballad "Ima", and the "cool jazz" swing of Ms. Cohen's "The Wein Machine" featuring her on tenor saxophone and special guest Gilad Hekselman on electric guitar. Percussionist Gilmar Gomes joins the proceedings on a number tracks including the expansive reading of Milton Nascimento's "Cais", a track made famous by vocalist Elis Regina.

There is an abundance of joyous music on this disk.  From the afore-mentiond "Putty Boy Strut" to Ms. Cohen's flight of fancy on "The Happy Song", it's a treat to her cavort atop the dancing drums and bass.  Of the 2 pieces with her Choro group, the sprightly "Espinha De Bacalhau" (a piece composed in 1937 by Brazilian clarinetist/bandleader Severino Araujo) jumps with glee and includes a funky piano solo from Lindner. Nascimento's romantic samba "Lilia" opens the recording - composed in the early 1970s, the tune is dedicated to the composer's mother. Here, the main Quartet (plus Gomes) stretch out and create a fine uptempo reverie. "In The Spirit of Baden" (a Cohen original) has a pleasing melody and quite a subtle yet exciting rhythm created by Freedman and Gomes. Lubamo's rhythmic guitar adds to the pleasure blending his chordal work with the acoustic piano.

Ms. Cohen's "Ima" ("mother" in Hebrew) is a sweet ballad with a clarinet solo that weaves in and out of the melody line. The gentle tribute shines in the midst of the more energetic tracks.  The Choro quartet also contributes a ballad "Ternura" (composed by Brazilian saxophonist K-Ximbinho, a member of Severino Araujo's Orchestra) - the piece has a lilting melody and Ms. Cohen's clarinet solo has a bluesy edge.

"Luminosa" lives up to its title, the word means "bright, luminous" in Portuguese.  Anat Cohen and her musical cohorts have a mission to bring lightness into our world and succeed...well, brilliantly.  Her spirit and exuberance shines throughout this music, even moreso in person.

For more information, go to anatcohen.squarespace.com.

Cristina Pato, a native of the Galicia region in the northwest of Spain, may be best-known in the United States for her work with the Silk Road Ensemble. She is a pianist and vocalist but her main instrument is the Galician bagpipes. "Latina" is her second US release for Sunnyside and it blends her love for the sounds of her native country with world music from other lands including jazz from America.  Featuring her working band of Victor Prieto (accordion), Edward Perez (acoustic bass), and Eric Doob (drums), the music is extremely exciting, with rhythm and sounds that seem to explode out of the speakers.  My first reaction to hearing "wailing" pipes over Doob's furious rhythms on the opening track "Fandango: Prueba De Fuego" (translates as "fireproof") is how much her interactions sound like Jan Hammer on the synthesizers working with Jeff Beck in the 1970s.  That track is the first section of the 6-part "The Latina 6/8 Suite", created for her by bassist Perez, all in the same time signature but inspired or based on rhythms from Sicily, Peru, Colombia and Spain.  "Tanguillo: The High Seas" has a formal feel in its initial presentation but when Ms. Pato, on piano, solos, one can hear Eddie Palmieri in her attack.  Ms. Pato explains the meaning of "Latina" on the final track on the suite "Taranella-Muiñeira: Epilogue" both vocally and with her pipes; the piece really takes off on the strength of the amazing drumming and the interaction of the pipes and accordion.

Prieto, who also hails from Galicia, has worked with the Maria Schneider Orchestra, the Arturo O'Farrill Latin Jazz Orchestra, and the Silk Road Ensemble, is quite a soloist as well, showing off his prowess on "Curralao: Currulao De Crisis" and on his composition, the high-powered as well as very funky "Let's Festa". Listen to the band romps on Emilio Solla's "Llegará, Llegará, Llegará" ("It will come, it will come, it will come") - pushed forward by the powerful accordion and the force of the rhythm section, Ms. Pato burn through her solo, hitting notes at the top of the pipes' range.

A compact 36 minutes, "Latina" will leave you breathless. There's nary a ballad - I can't imagine wanting to leave the dance floor when this music is playing. Cristina Pato not only can play impressively but also uses her music to teach about the wide range of Latin music.  A warning for the faint of heart; watch out for her screams as they as fiery as her incendiary Galician bagpipes.  For more information, go to www.cristinapato.com. 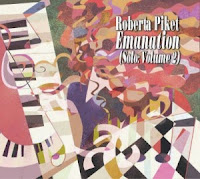 Pianist Roberta Piket issued her first solo CD in 2012. Featuring pieces by Wayne Shorter, Sam Rivers, Billy Strayhorn, Thelonious Monk, her mentor Marian McPartland, her father Frederick (who passed when she was 8) plus several originals, it displayed her wonderful ability to "tell stories" in song. "Emanation (Solo: Volume 2)" (Thirteenth Note) is similar in style and repertoire (Ms. McPartland and Monk, joined here by Herbie Hancock, Dizzy Gillespie, Jerome Kern, Howard Dietz/Arthur Schwartz, Sigmund Romberg/Oscar Hammerstein II, and 3 originals, 1 based in a theme by Frederic Chopin) and just as rewarding to listen to.

Her splendid work on Gillespie's "Con Alma" conveys both the flowing rhythm and the handsome melody. Monk's "Ba-Lue Bolivar Ba-lues" has that recognizable quirky melodic style the composer employed, conjuring images of him dancing while the band plays. The music gets decidedly funky on Hancock's "Actual Proof", a piece from his Headhunters days. Ms. Piket stays acoustic but the music is grounded in the dance rhythms that that ensemble specialized in. Her solo takes flight, moving in and around the left hand "funk".

The ballads deserve special mention. "Saying Goodbye" (a original) conveys all the emotions that the title suggests (with a light-hearted turn in the middle of the solo) while Ms. McPartland's "Ambiance"  has a lilting melody and chordal patterns that go in unexpected directions.  The title track blends darker chords with an expressive melody; the music does not flow as much as it seems to be falling forward, nudged by the low notes. There is a sweetness in "Haunted Heart", derived from Ms Piket's light touch on the melody.  The album closes with her "Fantasy on a Theme by Chopin", based on the Polish composer's "Prelude Opus 28 No. 2 in A-minor".  The opening chords and slow movement through the melody brings to mind the work of Erik Satie, the airiness of the approach to the work (despite the "dark" chords at the close), all contribute to the ultimate beauty of the performance.

Roberta Piket does not waste her time or that of the listener by creating an album where she merely displays her formidable technique. Nor are there long tortuous passages; in their stead are well-defined melodies, intelligent harmonies and solos that build upon those harmonies and melodies in logical fashion.  This is music that breathes, that reaches out for the heart and soul of the listener and, on occasion, for the dancing feet. "Emanation" is a fine recording that deserves your close attention.