What We Have Here Is a Triumph in Communication

Ventured up to Cambridge, Massachusetts, to Scullers Jazz Club to see and hear vocalist/composer Nicky Schrire and pianist Gerald Clayton perform music from "Space and Time".  It was the first of 2 gigs billed as "CD Release Performances" (the other occurring on 1/17/14 in The Kitano in New York City). The recording, one of my "Best of 2013", posits Ms. Schrire with 3 pianists - Mr. Clayton, Fabian Almazan and Gil Goldstein - performing standards, "pop" tunes, music from the vocalist's native South Africa and originals.

Over the course of 80 minutes, the duo played most of the tracks from the CD as well as newer pieces (one for the very first time).  Ms. Schrire is what I would call a "pure" singer, one who tells the "story" in every song without resorting to "flashiness".  She does engage in vocal percussion and wordless accompaniment but what she consistently accomplishes is getting to the "heart" of the lyrics in an emotionally satisfying (and, at times, stirring) performance.  Mr. Clayton, who turns 30 this year, is a fine musician with a strong left hand and who, in performance, created solo after solo that avoid cliches as well as complimented the emotions of the vocalist.  On Charles Trenet's "I Wish You Love", he amplified the sadness and resignation in the lyrics with an impressionistic solo that resonates still, several days after the performance.  The unaccompanied vocal opening verse of "Someone To Watch Over Me" was wistful, longing, and showed a vulnerability that drew the listener in.

For this evening, the audience became family thanks to Ms. Schrire's honest stage presence, her taking us into her confidence (for example, letting us know about her father's negative opinion of jazz), her humor, her joy at being in Boston, being on stage with Gerald Clayton, being with us.  There is no artifice, no distance between the performer and the audience; even when she sang in languages other than English, the music did not lose its emotional power.  The joy emanating from the stage was real, taking the chill from the rainy night and replacing the negativity of the long day with a soul satisfying warmth that enveloped the listeners like a hug.  To find out more about the performers, go to www.nickyschrire.com and geraldclayton.com. 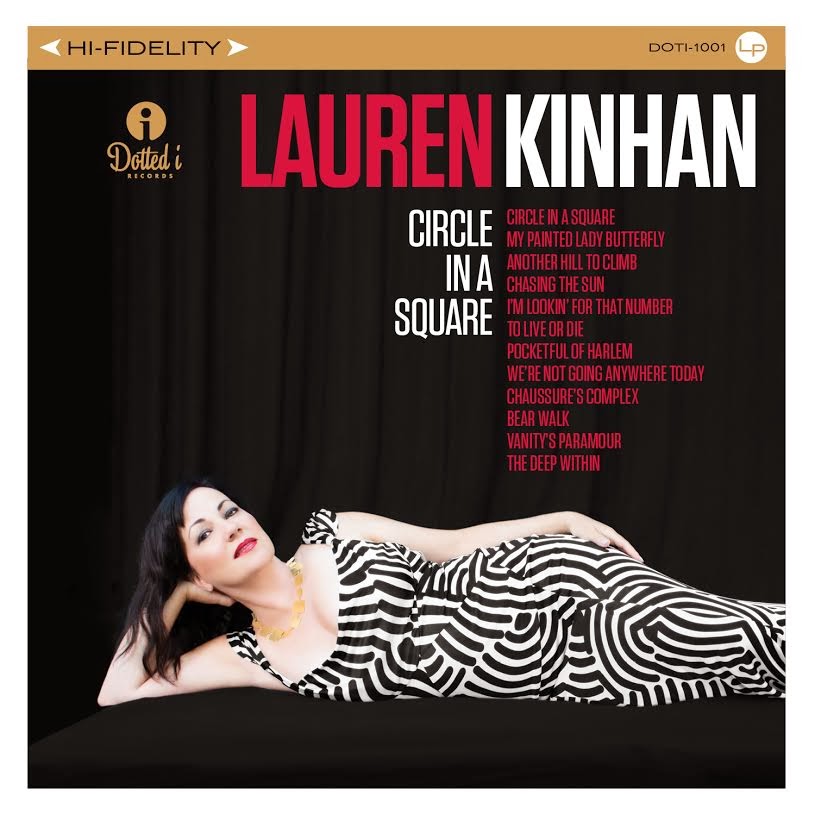 Vocalist/composer Lauren Kinhan is, perhaps, best known for her work with New York Voices and as 1/5th of MOSS (with Lucian Souza, Kate McGarry, Peter Eldridge and Theo Bleckmann).  "Circle In A Square" (Dotted i Records) is her 3rd "solo" CD and first to be self-released and is a triumph on numerous levels. All 12 tracks are original compositions (4 with collaborators) performed by a core group of musicians that includes Andy Ezrin (keyboards), Ben Wittman (drums), David Finck or Will Lee (bass) plus a strong group of guests that includes Randy Brecker (trumpet), Joel Frahm (tenor and soprano saxophones), Romero Lubambo (acoustic guitar), Aaron Heick (alto flute), Chuck Loeb (guitar), Donny McCaslin (tenor saxophone), John Bailey (flugelhorn), Gary Versace (accordion) and a string quartet.  However, it's the songs and Ms. Kinhan's powerful and vulnerable vocals that makes this recording so good.  These are "adult" songs with lyrics that celebrate jukeboxes (the title track), the frustration of everyday life ("Another Hill to Climb"), relationships that are in free-fall ("We're Not Going Anywhere Today"), fairy tales ("Bear Walk"), the craziness of single life ("Vanity's Paramour") and more. Ms. Kinhan's voice is so wonderfully malleable, blending in beautifully with the instruments (riding atop the beat on "Pocketful of Harlem") or digging deep into her soul to find sadness and truth ("The Deep Within").

As attractive as this music is on initial listening (Elliot Schneiner's production and and engineering makes each instrument stand out without hiding the vocal), it's the strength of the songs and the vocals that makes the deepest impression.  Ms. Kinhan's emotional delivery, her ability to bend a note to make a word sustain, and the poetry in much of the program is a joy to return to time and again.  And, she can swing!  "Bear Walk", a retelling of the Little Red Riding Hood saga, is one of several tunes that may remind the listener of the silky/sly funk of Steely Dan ("Aja" and beyond) but Ms. Kinhan's absolutely rocks the song.  Her vocal range, her interaction with guitarist Loeb plus her smart backing vocals kick "Pocketful of Harlem" into the stratosphere.

The next time someone tells you that modern music is soulless, does not "speak" to the human condition, refer them to "Circle In A Square."  Lauren Kinhan and her ensemble has created music that  artfully and splendidly avoids labels such as jazz, pop or funk; this is music that connects on multiple levels with grace, fire and a mature understanding of how one navigates through the shifty terrain of modern life.  Dig deeply!  For more information and a list of tour dates to celebrate the CD, go to laurenkinhan.com.
Posted by Richard B. Kamins at 8:02 AM