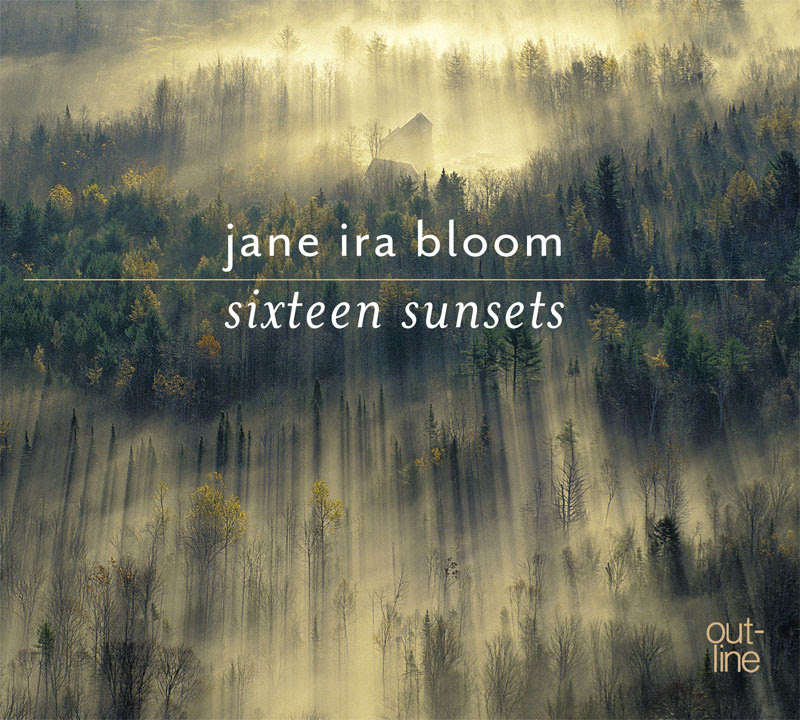 Soprano saxophonist and sound sculptor Jane Ira Bloom has been creating fascinating projects for nearly 4 decades.  Her first recording, "We Are", was a duet with bassist Kent McLagan (who now lives and plays in Colorado) issued on her own label (Outline Records) in 1978.  Over the ensuing years, Ms. Bloom has recorded for ENJA Records, CBS Records, Arabesque, ArtistShare, and, in 2008, returned to releasing on her own label.

What has not changed is her commitment to moving forward, to melody, to experimentation, to having a group of like-minded musicians who do not hold back their own creativity even as they support her whole-heartedly.  "Sixteen Sunsets" refers to the number of sunsets astronauts see in a day in space and provides the title for Ms. Bloom's new CD - the program is a collection of 14 ballads, 9 standards and 6 originals (there's 1 track that blends George Gershwin's "I Loves You Porgy" with Ms. Bloom's "Gershwin's Skyline") that finds the saxophonist in the company of bassist Cameron Brown, drummer Matt Wilson and the young pianist Dominic Fallacaro.  Fallacaro is a busy musician and producer based in Brooklyn, NY, who has toured with Kevin Mahogany and Freddie Cole plus producing CDs by younger up-and-coming vocalists.  His work on this album should win him many new fans.

The program opens with "For All We Know", a song first published in 1934 and made famous by Hal Kemp and Nat "King" Cole (among many others).  The interaction of Brown's melodic bass and Wilson's ever-so-quiet brush work with the pianist's impressionistic chords allows Ms. Bloom to not only caress the melody but move freely through her improvisation. That is followed by an original, "What She Wanted" that has a melody line reminiscent of Charles Mingus's "Goodbye Pork Pie Hat"; there's a bluesy quality to her soprano sound and a modal feel in the piano chords that gives the entire song a feeling of being suspended in mid-air.

Every melody is treated with love and close attention to details, whether it's "The Way You Look Tonight" (a duo for soprano and piano), the stunning take on Kurt Weill's "My Ship" (with the bell of the soprano sax pointed into the body of the keyboard) or the Latin tempo that drives "Ice Dancing (for Torvill & Dean)."  "The Way You Look Tonight" is also just piano and soprano; even as Fallacaro creates the lovely lines below the solo, he paints his own pictures.  One feels the longing in the unheard lyrics and the affection in the melody.

"Sixteen Sunsets" is music that serves as a healing balm as the end of a long day or to help through a period of emotional distress.  The sounds caress the listener so, by the time you reach the final track, "Bird Experiencing Light", one should feel as if a heavy weight has been lifted off his shoulders.  Jan Ira Bloom has not produced a "New Age" recording;  this is music that blends the search for peace with the joy of "playing." Kudos to all involved! For more information, go to www.janeirabloom.com.

"Sixteen Sunsets" has been nominated for a 2014 GRAMMY (best Surround-Sound recording) and ended up on several prominent critics' "Best of 2013" list.  The digital release was in December 5, 2013 and the "physical" due date is January 7, 2014.

Any music scholar knows that the sackbut is the early name for the trombone.  From the French word "saqueboute" meaning "push-pull", the instrument was first employed as a lower register trumpet in the 15h Century.

Fast forward 5 centuries, trombonist Joe Fiedler (born 1965, Pittsburgh, PA), a musician who has played in the pit bands for touring shows, in big bands and small ensembles alike, has formed "Big Sackbut", a quartet for 3 trombones and tuba.  Composed of Fiedler, Ryan Keberle and Luis Bonilla on 'bones plus the majestic tuba of Marcus Rojas, the leader admits that the band is modeled after the World Saxophone Quartet.  Their self-titled debut CD was issued in 2012 and now we have "Sackbut Stomp" (Multiphonics Music).  The new CD features the slide trumpet of Steven Bernstein on 3 of its 9 cuts.  The Sex Mob-founder is featured on the 'Buts' sweet reading of Roger Miller's classic "King of the Road" a blues-drenched track with a sweet arrangement.  Bernstein also takes the lead on Gil Fuller and Chano Pozo's "Tin Tin Deo", originally composed for Dizzy Gillespie.  Rojas is the "rhythm section" for this version and he s magnificent in his role as "bass and drums".  The other "cover tune" is "Eight Page Bible" from the pen of saxophonist Bennie Wallace.  This is a bluesy, saucy, tune, which should come as no surprise to those who know that the "Bible" in the title refers to the pornographic comic books of the 1930s (and beyond).

The Fiedler originals include the lovely ballad "Pittsburgh Morning" on which the composer takes a fine solo, an uptempo feature for Keberle called "The Schlep", and the high-energy romp "Feet and Breathe" that features a rumbling bottom line supporting solos from both Fiedler and Bonilla.  Everybody gets a chance to shine on the funky title track, the polyphonic middle section hearkening back to "second-line" of New Orleans.

What stands out most on "Sackbut Stomp" are the impressive melodies and arrangements Joe Fiedler creates for his brass ensemble. While the solos are strong, the settings they are heard in range from unaccompanied to everyone in support.  Not only is Joe Fiedler's Big Sackbut worth listening for its striking musicianship but this music is a lot of fun.  For more information, go to www.joefiedler.com.
Posted by Richard B. Kamins at 4:33 PM