Some players get better with age - yes, it's a cliche but quite apropos in light of these 2 excellent recordings. Ken Peplowski (born Cleveland, Ohio on May 23, 1959) has been playing jazz on the clarinet and tenor saxophone since high school. After his first year of college, he was asked to join the Tommy Dorsey Orchestra, led at the time by Buddy Morrow and, while with that ensemble, met saxophonist Sonny Stitt (1924-1982) and studied with him. Peplowski says about the saxophonist " “He was, and is, an inspiration to all of of us who make a living ‘on the road’ – I’ve never heard anybody play with such amazing consistency as Sonny, through all kinds of settings.” In 1980, Peplowski moved to New York City and has been working ever since, playing all styles of music and playing it extremely well.

"Maybe September" (Capri Records) finds leading a group with Ted Rosenthal (piano), Martin Wind (bass) and Matt Wilson (drums). As befitting the Edward Hopper painting on the cover ("Gas", 1940), the music is often subdued. Opening with Irving Berlin's "All Alone by the Telephone", Peplowski's splendid clarinet imbues the melody with great emotion, sticking fairly close to the melody while Wilson supports him on the cymbals, Rosenthal plays short figures behind the melody and Wind plays counterpoint. The drummer is fairly subdued - to know Matt Wilson is to see personification of playfulness - yet, throughout this program, he makes sure the spotlight is squarely on the leader.  Still, he dances gleefully on Artie Shaw's "Moon Ray", struts like a peacock on the old "country 'n' western" classic "(Now and Then There's) A Fool Such as I" and deftly guides the rhythm on Duke Ellington's "Main Stem." His cymbal work is gentle throughout the first half "Caroline, No" (the Brian Wilson tune), a song that the leader "sings" on tenor saxophone; in the second half, he contributes fine floor tom work. There seem to be few hints of Stitt in his saxophone work, more of Ben Webster, Coleman Hawkins and Paul Gonsalves (especially on the Ellington song) and a touch of Lester Young.

Peplowski's selection of material is certainly catholic. For instance, in between the country tune and the Beach Boy piece, he plays the "Romanza" from the Poulenc "Clarinet Sonata" as a duet with the pianist. He follows the Wilson ballad with a bass and clarinet duet on Lennon & McCartney's "For No One" plus the CD closes with another duet with the bassist, this time a sweet take on Harry Nilsson's "Without Her." The title track was written for the movie "The Oscar" and made famous by both Percy Faith (as an instrumental) and in a vocal version by Tony Bennett (the vocalist also recorded the piece as a duet with Bill Evans.)

"Maybe September" does, at times, feel like music for Autumn but there is also a good amount of playful interactions between the members of the quartet.  Everyone plays well, with both spirit and sensitivity, making music that is warm and inviting, like hot tea or a glass of vintage port.  Ken Peplowski possesses a wonderful tone on clarinet and a bluesy yet melodic breathiness on tenor saxophone. Kudos also to Martin Wind, Ted Rosenthal and Matt Wilson for their warmth and classy musicianship.  For more information, go to caprirecords.com/artists/ken-peplowski. 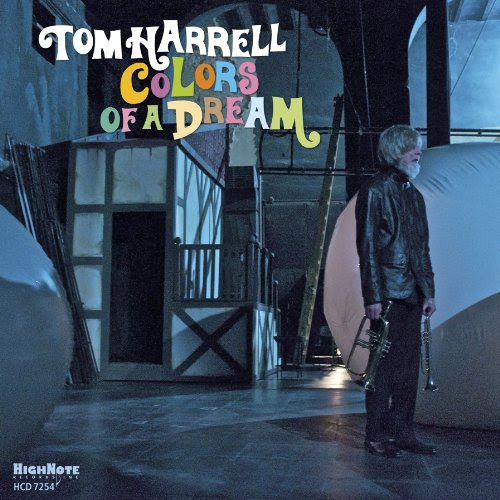 Tom Harrell (June 6, 1946, Urbana, Il) has recorded a slew of Lps and CDs over a career that spans nearly 4 decades for labels such as Steeplechase, Contemporary, Criss Cross, Chesky, RCA, and now, with release of "Colors of a Dream", his 5th recording for High Note Records.  This is his first recording for the label that does not feature his Quintet, although group members Wayne Escoffery (tenor saxophone), Ugonna Okegwo (bass) and Johnathan Blake (drums) are an integral part of the session (the only one Quintet member missing is pianist Danny Grissett.)  For this material, Harrell fills out the group and sound with Jaleel Shaw (alto saxophone) and Esperanza Spalding (bass, voice).  The addition of Ms. Spalding is no marketing gimmick; her work with fellow Okegwo adds an exciting element to many of the tracks and her wordless vocals on 7 of the 11 cuts adds yet another layer to the front line of reeds and brass.  The one track where she sings lyrics is "Velejar", originally recorded by its lyricist Fleurine in 1996 on a CD with Harrell (the composer) as part of the band. The rest of the program features pieces that range from Latin-influenced tunes such as "Tango" that opens the CD to the "straight-ahead hard bop" of "Blues 2013" to the shifting tempos of the instrumental "Walkaway" where the dialogue of Shaw and Escoffery on top matches the intense dialogue of the 2 basses beneath, all fired by the splendid drum work of Blake. Harrell's flugelhorn solo on the track is short but stands out in how it shifts the intensity and sets the stage for the bass solos. It's just trumpet and the 2 bassists on "Family", a Brazilian flavored tune carried along by the gentle force of the basses.  Harrell's solo also has many layers, going from melodic phrases to bluesy interjections, his lines bobbing like a boat on a wind-swept lake.

Johnathan Blake, who is making quite a name as a first-call drummer, fires up many of the tracks.  His driving, unrelenting, propulsion on "Goin' Out" is a treat and makes one want to dance (in the liner notes, Harrell notes the influence of James Brown, Stevie Wonder and Earth, Wind & Fire in his composing for the horns but you cannot ignore the funk on this track.) Blake is still fiery but more tempered on the energetic "State", allowing for the voices and saxophones to carry the piece. Escoffery unleashes an imposing solo that is followed by the leader's more restrained statement, all powered by the drummer's insistent drive. The drummer locks in with the bassists for the sensuous "Phantasy in Latin" which is notable for the 4 "voices" on the melody and Harrell's long solo romp. And, 'romp", he does, as he soars above the rhythm section with glee. The saxophonists sit out "Even If", a blazing r'n'b influenced dance tune with humorous asides in the trumpet solo, an appealing bouncy bass line and Ms. Spalding's lithe vocals in sync with the leader.

"Colors of a Dream" is another impressive step forward for Tom Harrell.  Like his contemporaries Herbie Hancock and Wayne Shorter, Harrell  is always "in the moment", rarely, if ever, looking back. Whatever he heard  in his mind while conceiving of this project is brought to reality by his wise choice of associates. The excellent mix (by Dave Darlington of Bass Hit Recording in New York City) puts the basses in the forefront without sacrificing any of the nuances of the brass, reeds and voice.  All told, these "Colors" stand out!  For more information, go to www.tomharrell.com.
Posted by Richard B. Kamins at 8:25 AM