Creative Fire(house), Young Pianist at the Helm, + a Fun and Funky Canadian Trio

Iraqi-American composer/trumpeter Amir ElSaffar has just issued his 4th CD for Pi Recordings.  "Alchemy" features his wonderfully accomplished band including the young British-born pianist John Escreet, bassist Francois Moutin, drummer Dan Weiss and tenor and soprano saxophonist Ole Mathisen. The music he has composed and arranged continues ElSaffar's exploration of Iraq's maqam music now filtered through the time he has spent in recent living in Egypt and the jazz he has played in the United States. This music, like much of what he has produced up until now, has great urgency, relying heavily on Weiss to handle the intense rhythms and the lightning-like tempo changes.  (On his American recordings, ElSaffar has employed drummers who understand world music - this is Weiss's first CD as the group's percussionist with previous albums featuring Nasheet Waits (twice) and Alex Cline.) Escreet, who has technique to burn but rarely shows off, often creates trance-like chord patterns for the other soloists.  Mathisen, who is one busy musician (working with Randy Brecker, Paula Cole, and Peter Erskine as well as leading his own group plus co-leading Ffear with trombonist Chris Washburne), is a fine foil for the trumpeter, a hardy and heady player not afraid to dig into a solo.  Moutin, like Weiss, is not only the foundation of many of the tracks but also his interactions show strength and intelligence.

The new CD contains the 3-part "Ishtarum Suite", 4 selections from the "Alchemy Suite" and 3 more pieces, all composed by ElSaffar. This music jumps out at you with its rhythmic intensity, with the harmonic variations of the trumpet and saxophone plus the intelligent work of pianist Escreet.  For an excellent overview of this music, go to pirecordings.com/album/pi51.

Amir ElSaffar (pictured above left) is bringing this fine music and group (Dave Ambrosio replaces bassist Moutin on this gig) to Firehouse 12, 45 Crown Street in New Haven this Friday October 18. They will be playing music from the new CD and one expects that the intensity level will be very high in the splendid performance space.  They'll play 2 sets - 8:30 and 10 p.m. - and you can find out more by going to firehouse12.com or calling 203-785-0468.

In a fun twist, ElSaffar and Escreet will be back at the Firehouse in 4 weeks as part of flutist Jamie Baum's Sextet. That group is also playing the next evening (November 16th) at The Side Door in Old Lyme, Ms. Baum is touring in support of her brilliant new Sunnyside album, "In This Life." For ticket information, click on the link above or go to thesidedoorjazz.com/. 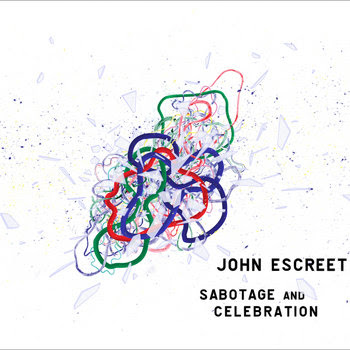 John Escreet, born 29 years ago in Doncaster, England, has just issued a new CD, his 5th as a leader and first for the British label, Whirlwind Recordings.  "Sabotage and Celebration" features a core group composed on Escreet (acoustic piano, Fender Rhodes, harpsichord), David Binney (alto and soprano saxophones), Chris Potter (tenor saxophone), Matt Brewer (bass) and Jim Black (drums) plus a 5-piece string section, a brass section of Shane Endsley (trumpet) and Josh Roseman (trombone) and appearances by Adam Rogers (guitar) as well as vocalists Louis Cole, Genevieve Artadi and Nina Geiger (all on 1 track). Escreet composed all the tracks, did all the arrangements and produced the sessions.

This music grabs one by the collar and rarely lets go for just under 53 minutes.  Recorded 1 day after the 2012 US Presidential election, the music has an urgency and a sense of release that reflects how many Americans felt after the long election cycle . Opening with "Axis Of Hope", a short work scored for strings only, the rhythm section jumps in at the beginning the second track, "He Who Dares", followed by the saxophonists playing the Frank Zappa-like theme supported by brass section.  Binney solos first and he tears into his spot like a man possessed followed by the leader who pushes against Black who responds in kind. Potter solos after a recapitulation of the theme, digging deep and letting fly as the strings flow behind him. The title song follows and is definitely the tale of the 2 actions. The swirling opening, which moves out of tempo in raging fashion as the horns wail and squeal while Black and Brewer parry and thrust. leads into a hard-edged piano solo that softens as it comes to a close.  The "celebration" section is a true release with the rhythm section creating a furious pace beneath a glorious piano solo followed by a blazing tenor saxophone statement.

21 minutes into the program and you might find yourself gasping for air but overjoyed as well.  There is a true sense of passion in Escreet's playing and in his original melodies.  As the program moves along, there are softer moments including the opening few minutes of lovely "Beyond Your Wildest Dreams" that closes the CD.  After a wordless vocal interlude, the band gallops ahead, Binney solos on soprano (rare for him), the strings bow furiously alongside and all move to an exciting climax.

"Sabotage and Celebration" is an impressive step forward for John Escreet, whose career up to this point has been filled with giant steps.  They has never been any doubt about his ability to play; now, his compositions and arrangements illustrate his maturity and sense of exploration. For more information, go to www.johnescreet.com or www.whirlwindrecordings.com.
*************************************************

The Griffith Hiltz Trio - Nathan Hiltz (guitars, bass pedals), Johnny Griffith (alto and tenor saxophones, bass clarinet) and Sly Juhas (drums) - move away from the more straight-ahead style of their debut CD and head into a bop-blues-fusion playground on "This Is What You Get..." (self-released).  There are moments when the trio reminds of the 1970s British jazz-rock trio, Back Door. There is a small similarity in the melodies of some but the earlier group had a heavier feel led by the highly amplified bass of Colin Hodgkinson.  Here, it's Hiltz providing the bass lines with foot pedals while he's either soloing or playing funsky rhythm guitar.  This is music for a sunny day, whether it's the bouncy bop of "For Otis", the fiery rock sound of "Strawman" (and, in a wonderful twist, Hiltz plays a solo on Banjo-tar..yes,a  banjo with the neck of a guitar) or the modal swing of "Bone Arm."  Juhas is a solid drummer, playing with fire when called for but usually providing a steady beat with fine cymbal work.  He and Hiltz lock in on the high-energy title track, the guitarist's chords providing excitement in support of Griffith's solo.
For his part, Hiltz plays his most rock-oriented solo on the same cut.

The only "cover tune" on the CD is, of all choices, a sweet take on "Rainbow Connection" from 1979's "Muppet Movie." Griffith plays bass clarinet here and it's a smart choice, not only because he plays the instrument well but also the lower, woodier, tone of the instrument fits the quiet route the Trio chose for the piece.

"This is What You Get..." is the appropriate title for this CD from the Toronto, Canada-based Griffith Hiltz Trio.  Few if any frills, this effort is played by 3 musicians having what sounds like tons of fun, enjoying the "groove", serious about their music but not taking themselves too seriously. Check it out.  For more information, go to griffithhiltztrio.com.
Posted by Richard B. Kamins at 10:58 PM