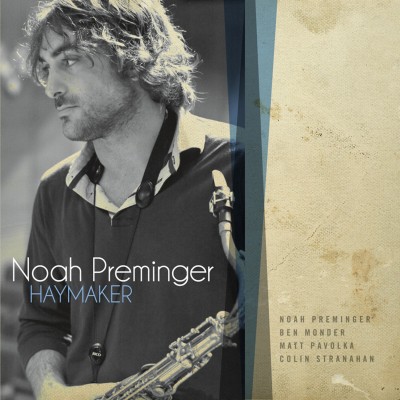 For his 3rd CD as a leader, saxophonist/composer Noah Preminger returns to a quartet setting, the configuration that served him so well on his previous recording as a leader but with one major change.  Guitarist Ben Monder is the second voice as opposed to pianist Frank Kimbrough who appeared on his previous recording "After the Rain."  The appropriately titled "Haymaker" (Palmetto Records) - Preminger took a serious interest in boxing several years ago - displays the saxophonist continuing maturity as a player and composer.  Besides Monder, bassist Matt Pavolka and the excellent young drummer Colin Stranahan round out the group.  This unit has spent plenty of time working together and it shows. The rhythm section moves gracefully as well as purposely through each song.  They not only provide strong support but also join in the conversations.  Stranahan gets busy on the title tune, driving the piece forward at breakneck speed as Monder and Pavolka play with great restraint.  One finds it hard to pick any one influence in the saxophonist 's playing, perhaps Wayne Shorter (moreso on the ballads.) He's a fearless improviser (did I mention he's a skydiver and skier) -  he crafts a delightful solo introduction to "Tomorrow" (yes, the song from "Annie") and, as he moves through the melody, fragments of the intro re-emerge at the end of several phrases. What's even more impressive is that he does not over extend the piece with a long, meandering, solo.

Monder is his usual fine self, so understated in his rhythm work and quite exploratory on every solo.  He seems to be on the brink of letting go on "15,000" yet holds back while playing an intriguing solo. His spare chordal accompaniment on "My Blues for You" foreshadows a most tasteful solo.  His insistent lines on Dave Matthews's "Don't Drink The Water" build off Stranahan's hard-edged playing.   The drummer is consistent throughout, that is, consistently good.  Yes, he can be loud and forceful but displays tasteful restraint on slower numbers such as "Stir My Soul" - that same tune features fine bass work from Pavolka, not just supportive but moving in counterpoint with the melody lines (he also takes an excellent solo.) "Rhoda's Suite" is reminiscent of music made by the Paul Motian, Bill Frisell and Joe Lovano Trio.  One hears the similarity in how this quartet uses space and in the deliberate melody and solos. Stranahan stirs the stew with his heated percussion.

With "Haymaker", Noah Preminger continues to traverse a musical path of his own choosing.  This music has fire and wit, subtlety and fearless interactions.  One can tell this foursome listens to each other when they play and the result is often emotionally satisfying.  For more information, go to www.noahpreminger.com.

Noah Preminger plays a "CD Release Party & Birthday Celebration" on Sunday June 2 at 6:30 p.m. in the fine club atmosphere of Bridge Street Live, 41 Bridge Street, in Collinsville, CT. All the participants from the recording session will be there save for Ben Monder - the talented young pianist Glenn Zaleski will take the guitarist's place. Mr. Preminger will be celebrating his 27th birthday so one expects the event to be a bit raucous at times.  For more information, go to www.41bridgestreetlive/calendar/ or call 860-693-9762.

Australian-born alto saxophonist Angela Davis, who turns 28 in June of this year, move to the United States in 2008 to study at the University of the Arts in Philadelphia.  After earning her Master's Degree in 2009, she joined the Jazz Faculty there and has also been honing her craft in clubs, festivals and concert halls.

"The Art of the Melody" (Nicholas Records) is her debut recording and the title tells much of the story.  Ms. Davis embraces the melody in each song and, while she certainly can solo, her overarching goal seems to be to make sure the listener connects with the emotions within the melody.  Joining her on this adventure is the sparkling young pianist Chris Ziemba, and fellow Aussies Linda Oh (bass) and Rajiv Jayaweera (drums).

What stands out on first listen is Ms. Davis's lovely, light, tone - one can hear the influence of Lee Konitz.  Ziemba's work is exemplary, whether in duet on the sweet reading of Boz Scagg's "We're All Alone", playing in unison with the saxophonist on the bop-ish delight "Conscientia" or flying over the rhythm section on the opening "41 St. Nick." Ms. Oh, who is one busy musician as both a leader and sideman, infuses the music with a buoyant feeling on the uptempo tracks and a solid foundation on the slower pieces (she's does get a bit impish on Tom Waits's "Martha.") Her duet with the leader, Charlie Chaplin's "Smile", shows why she's in such demand;  her playing is smart and her choice of notes not only frame the alto saxophonist melodies but also provides excellent counterpoint.  Jayaweera, who came to the US in 2011 and has already worked alongside pianist Kenny Werner, saxophonist Joel Frahm and vocalist Cyrille Aimee, doesn't show off but certainly shows up. His brush work on the lovely reading of "Crazy She Calls Me" is so light and feathery and perfect underneath Ms. Davis's melodic saxophone.  There's a touch of Paul Motian in his active work on the traditional "Annie Laurie."

One can just imagine Paul Desmond smiling as Angela Davis plays.  Her sweet tone, her dedication to melody over technical prowess and her interactions with the rhythm section deliver a strong message - for Ms. Davis, the "art" is found in the "melody." For more information, go to www.angeladavismusic.com.
Posted by Richard B. Kamins at 6:00 PM