What a treat is in store for fans of Uri Caine.  This new Trio disk - "Siren" (Winter & Winter) - finds Caine in the studio with bassist John Hebert and drummer Ben Perowsky. The program hits the ground running with the funky opener "Tarshish" and drives right through to the Latin/Caribbean/"free" jump of "Manual Defile."  The rhythm section really spurs Caine on "Calibrated Thickness" and he is up to the task, his active phrases spilling out of the speakers.  The 3 slow down a notch on the bluesy "Hazy Lazy Crazy", Hebert's thick bass lines living up to the title - his solo is a bluesy treat, egging Caine on to respond with some "raggy" lines of his own. Pay attention to how Perowsky interjects his sweet brush work on the choruses.  "Free Lunch" is a tasty if out-of-kilter piece that hits its stride in the middle when the rhythm section really fires up Caine by varying the dynamics and shifting gears on the tempo.  The title track is slow, quiet, with more fine bass work and phrases from the pianist that smartly blends blues and classical lines.  The jagged edges and raucous rhythmic feel of "Crossbow" is such a pleasing 3-way conversation that it seems too short at 4:17 - one just wants this kind of this kind of fun to go on a lot longer.  Several other pieces have a similar feel, like the propulsive "Succubus" and the jaunty "Interloper."

With the exception of "Green Dolphin Street", Caine contributed all the pieces on the CD.  Messrs. Caine, Hebert and Perowsky know each other well and that familiarity breeds musical success.  They constantly challenge each other to play harder, smarter, funkier, and melodically.  As I wrote above, what a treat! Dig in and dig it! For more information, go to www.uricaine.com. 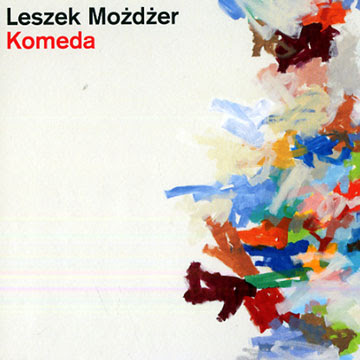 Krzysztof Komea (1931-1968) is best known to the Western audiences as the Polish composer who wrote scores for the early movies of Roman Polanski ("Knife In The Water" and "Rosemary's Baby") but, before he turned his attention to cinema, he led a series of jazz ensembles that played throughout Europe.  Trumpeter Tomasz Stanko, who played in Komeda's quintet from 1963-65, has recorded a number of Komeda's compositions and, in the last several years, there have been several CDs that celebrate his music. Those include 2009's "Requiem" by the Komeda Project (WM Records) and 2010's "Komeda - The Innocent Sorcerer" by saxophonist Adam Pieronczyk (Jazzwerkstatt).

Pianist Leszek Możdżer pays homage to the composer on "Komeda" (ACT Records), a solo record that is, at turns, quite lovely and magical.  The 8 pieces on this CD have a grace and elegance, not surprising considering Możdżer's classical training - one can hear the influence of Keith Jarrett in the slower works but the pianist is really interested in the rich melodies and often exquisite harmonies.  The 2 long pieces in the middle of the program - the stately "The Law and the Fist" (10:52) and the multi-faceted "Nighttime, Daytime Requiem" (13:36) - cover much musical territory and engrossing, fascinating compositions.  There is a sense in the dancing left hand on "Cherry" while Możdżer displays a Bill Evans-touch on the medium-tempo "Moja Ballada" that closes the CD.

Krzysztof Komeda's music, in the creative mind and hands of Leszek Możdżer, is music to be savored many times.  On each listen, the music reveals a bit more of the impressive depth in Komeda's works. Excellent from start to finish - to find out more, go to www.mozdzer.com.

There are those who believe that a big city needs a river to make it great.  Jazz, in its infancy, used the Mississippi River to spread its influence up to Memphis and St. Louis then up the Chicago River to the Windy City.  For his 3rd CD on Challenge Records, tenor saxophonist Harry Allen (born 1966), along with producer Chris Ellis, selected 13 songs for "Rhythm On The River." Joining Allen on this musical journey is his regular crew of Joel Forbes (bass), Chuck Riggs (drums) and the classy Italian-born pianist Rossano Sportiello - Warren Vache brings his cornet along for 4 of the cuts.  The vast majority of the compositions come from the 1920s and 30s with "Cry Me A River" being the "newest" piece (1955).

Allen's blend of Coleman Hawkins' "heft" and Ben Webster's "breathy" sound is perfect for this music.  He rarely, if ever, overplays and his ballad work is quite pleasing.  "Cry Me A River" is a slow blues, ruminative not mournful. Sportiello, who is an impressive "stride" player, shows his tender side on the slower piece. He can swing nicely - the pianist's short solo on "River, Stay 'Way From My Door" has a sprightly bounce especially beneath Vache's New Orleans-influenced solo.  Vache is an excellent addition.  When he rises out of Allen's soft tenor lines on "Swanee River", the song shimmers.  He adds just the right spice to "Lazy River", a dash of cayenne pepper to Allen's buttery roux.  That "mellow" tone serves the tenor player well on the Rodgers-Hart ballad "Down By The River", a pleasing ballad with more fine work from the pianist.  The rhythm section deserves praise as well;  Riggs keeps the beat percolating without being showy (sounding much like Mel Lewis when he played in small group settings) while Forbes shows both a lyrical side as well as being in step with his section partner's ride cymbal.

It's snowing lightly while I'm writing but this music has warmed our house nicely.  The songs have a sweet feel without coming off as "fluffy" or even dated.  Harry Allen, along with his cohorts, make music to relax the tired soul.  For more information, go to www.harryallenjazz.com.

Yes, I write about Jason Crane and "The Jazz Session" a lot but his insightful interviews are a pleasure to listen to. Now you can link to those interviews on the top of this blog. This week, Mr. Crane spends some quality time with drummer/composer/teacher/all around "swell fella" Matt Wilson.  Not only can you listen to them chat but, thanks to jazzdiy.com, you can watch Matt in a separate but equally fascinating conversation (although the questions are written on the screen and you do not hear Jason Crane's voice.)  If you have ever seen Matt Wilson play, you know he can be quite funny (even silly) but he is quite the consummate musician.  Thanks to Scott Menhinick for organizing the fascinating website, a source for all creative musicians and the people who help move the music forward. Go to jazzdiy.com/2012/01/23/interview-wilson/ to watch and enjoy.
Posted by Richard B. Kamins at 10:08 PM