The National Endowment of the Arts presents its annual Jazz Masters Fellowship tonight at Lincoln Center in New York City (January 10, 2012), a presentation that can be viewed, via webcast, at www.jalc.org/neajazzmasters/.

The NEA originated this program in 1982 to pay tribute to those artists who have enhanced this American art form with originality, spirit and the desire to educate.  This year's honorees are no exception.

Sheila Jordan (pictured above), born in Detroit, Michigan and raised by her grandparents in Pennsylvania, became exposed to jazz when she returned to the Motor City during the early years of World War II.  She met numerous jazz musicians and, by the end of the decade, was singing in a vocal trio.  Moving to New York City in 1952, it was 10 years before she made her recording debut on composer/arranger George Russell's "The Outer View." Within in few months, she released her first Lp under her own name on the Blue Note label, "Portrait of Sheila." Over the next decade-and-a-half, she spent much of her time raising her daughter yet found time to perform in clubs and churches as well as working with trombonist Roswell Rudd.  In the late 1970s, she began working, recording and touring with pianist Steve Kuhn - their 2 recordings for ECM helped to bring Ms. Jordan to a wider audience. She also displayed an affinity for performing in duos with bassists.  She's recorded with Arild Andersen, Steve Swallow, Cameron Brown (a collaboration that continues to the present day) and Harvie S.  Later this month, HighNote Records will issue "Yesterdays", a recording of a 1990 concert with Harvie S. Sheila Jordan still tours and teaches workshops around the world. Find out more by going to www.sheilajordanjazz.com/. 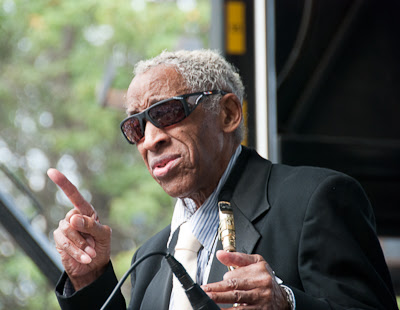 For many music fans, tenor saxophonist Von Freeman, born in October 1923, is Chicago jazz personified (truly, he shares that title with the late Fred Anderson.)  Freeman made the Windy City his base of operations for a career that spans over 7 decades!  After spending World War II in the US Navy band, he returned to Chicago and began performing in clubs with his brothers George and "Bruz", often backing touring jazz artists. In the 1950s, he played with Sun Ra, pianist Andrew Hill, blues man Jimmy Witherspoon and others.  Freeman made his national recording debut in 1972, "Doin' It Right Now", an Lp produced by Rahsaan Roland Kirk.  Later recordings paired with his son Chico (1982) and another fine Chicago saxophonist Frank Catalano (1999) - the series of CDs on Premonition Records (recorded and released between 2001 and 2006) are among his strongest work. In June 2010, Von Freeman received the Jesse L. Rosenberger Medal from the University of Chicago "in recognition of achievement through research, in authorship, in invention, for discovery, for unusual public service or for anything deemed of great benefit to humanity."

New York City born and raised (December 9, 1943), trumpeter Jimmy Owens began his studies at the age of 14 with Donald Byrd.  He would go on to study with composer Henry Brant and get his Masters Degree in Education from the University of Massachusetts.  Owens also has been a very busy musician, performing alongside Dizzy Gillespie, Kenny Burrell, Kenny Barron, Gerald Wilson, Max Roach and Billy Taylor.  He was a charter member of the Thad Jones-Mel Lewis Jazz Orchestra and musical director of musical director of the New York Jazz Repertory Company. Owens has been an educator on campuses and on the streets (working with Billy Taylor's Jazzmobile Program) and an advocate for the rights of performing artists, helping in the foundation of the Jazz Musician's Emergency Fund, a program to help individual musicians with medical, financial, and housing assistance. Jimmy Owens is the recipient of the 2012 A.B. Spellman NEA Jazz Masters Award for Jazz Advocacy. This month, IPO Records issues Owens' newest CD, "The Monk Project", dedicated to the music of Thelonious Monk and featuring, among others, Kenny Barron, trombonist Wycliffe Gordon and saxophonist Marcus Strickland. To find out more and check out his extensive discography, go to jimmyowensjazz.com. 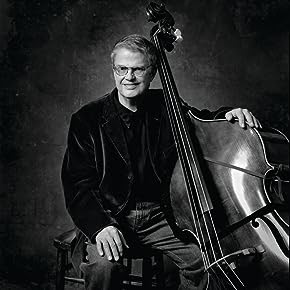 If you are not aware of bassist Charlie Haden's impressive body of work as well as his commitment to social and political justice, you've missed a lot. Moving to Los Angeles, California, in 1957 from Missouri, the bassist came in contact with legendary musicians such as saxophonist Dexter Gordon, pianists Hampton Hawes and Paul Bley.  Still, it was his meeting with saxophonist Ornette Coleman that set his career in motion.  The series of recordings Coleman made for Atlantic Records from 1959-61 turned the jazz world on its ears.  Haden went on to work with pianist Keith Jarrett, first in a trio setting with drummer Paul Motian - with the addition of saxophonist Dewey Redman, the pianist's "American Quartet" made an impressive group of recordings for Impulse and ECM.  In 1969, Haden paired with pianist/composer/arranger Carla Bley to create the Liberation Music Orchestra, a big band that combined jazz and politics to shed light on causes the bassist felt were quite important (most especially, American "Imperialism.")  He's recorded in so many settings, from duos (with Hank Jones, Keith Jarrett, and Pat Metheny) to trios (with Geri Allen and Paul Motian as well as Jan Garbarek and Egberto Gismonti plus Don Cherry and Ed Blackwell) to leading his Quartet West (displaying his love of standards and Hollywood movie music).  This week sees the release of "Come Sunday", a duo CD with Hank Jones. To find out more, go to www.charliehadenmusic.com.

Another musician who should need no introduction to jazz fans is drummer/pianist/composer Jack DeJohnette. The Chicago native first came to critical notice in 1966 as a member of saxophonist Charles Lloyd's Quartet (also featuring Keith Jarrett) and, within a few years, recorded with pianist Bill Evans, saxophonist Joe Henderson, trumpeter Freddie Hubbard, Herbie Hancock and Chick Corea.  He joined Miles Davis "electric" band and appeared "Bitches Brew" and other recordings from that era. DeJohnette is featured on many ECM recordings, including 10 as a leader.  He started his own label, Golden Beams, with releases ranging from "New Age" to piano trio jazz.  To celebrate his 70th birthday, DeJohnette will bring 3 groups to this summer's Newport Jazz Festival and, next week, E1 Records will issue "Sound Travels", a project that finds the drummer playing many different styles of music with guests Bruce Hornsby, Bobby McFerrin, guitarist Lionel Loueke, trumpeter Ambrose Akinmusire, Jason Moran and Esperanza Spalding (DeJohnette appears on 3 tracks on her upcoming release.) To find out more about his amazing career, go to www.jackdejohnette.com.  For an excellent interview, go to thejazzsession.com/2012/01/09/the-jazz-session-336-jack-dejohnette/  and listen to his chat with Jason Crane.

If you want more information about the NEA, its Jazz Initiatives and the Jazz Masters Program, go to arts.gov/national/jazz/index.html.
Posted by Richard B. Kamins at 10:17 AM