More of Best Of 2011 (Including Local Folks) 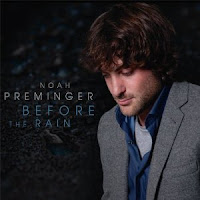 25-year old Noah Preminger grew up in the Hartford, CT, area and studied at the New England Conservatory of Music in Boston, Massachusetts. Since arriving in New York City, he's played with a slew of great musicians including Frank Kimbrough, Fred Hersch, Dave Liebman and Dave Douglas.  For his second CD as a leader, "Before the Rain" (Palmetto Records), he once again called upon pianist Kimbrough while added bassist John Hebert and drummer Matt Wilson.  This is not your typical sophomore attempt.  Preminger rarely if ever overplays and his compositions offer much space for Hebert's counter-melodies, Wilson's expansive percussion and Kimbrough's impressionistic piano. Several of the pieces are informed by Ornette Coleman (the quartet plays Coleman's "Toy Dance" from his Blue Note Lp, "New York Is Now"). Preminger often displays a light tone, playing high in the tenor range but, like Charles Lloyd, he does not squall or scream.  This music is timeless, this music is contemporary and my desire to hear the entire program has not waned over the year since its release.

I admit to a soft spot in my heart for pianist/composer Noah Baerman's "Know Thyself" (Lemel) - I've known Mr. B for over a decade and was in the audience at Wesleyan University (where he directs the Jazz Ensemble) when the piece was premiered in 2009.  The 65-minute work, broken into 13 parts for the recording, is a story in sound featuring musicians who are long-time friends and associates.  Wayne Escoffery (tenor and soprano saxophones), Amanda Monaco (guitar) and Baerman met in their teens and have played together in various formations for over 2 decades while bassist Henry Lugo and drummer Vinnie Sperrazza have been the nucleus of his Trio for the past 7 years.  Also in the mix are Erica von Kleist (alto saxophone, flute) and Chris Dingman (vibraphone).  The music covers a wide swath of stylistic territory, from gospel to blues to pop influences to straight-ahead hard-bop - it's filled with great emotion, at times gentle, yet Sperrazza can be a firebrand and both Escoffery and Baerman create powerful statements near the end of the work.  This is music to contemplate and celebrate.  For more information, go to www.noahjazz.com.

Dingman issued his debut CD this year and "Waking Dreams" (Between Worlds Music) is stunning.  The Wesleyan graduate, who was turned on to the vibraphone by Wesleyan Professor Jay Hoggard, wrote this extended suite (he does not call it that but there is a sonic thread that is woven throughout the program) for a group that features Ambrose Akinmusire (trumpet), Loren Stillman (saxophones), Fabian Almazan (piano) and the superb rhythm section of Joe Sanders (bass) and Justin Brown (drums).  One of the 14 pieces, "Manhattan Bridge", is truly one of the loveliest songs you'll ever hear.  Akinmusire, whose Blue Note debut CD I have yet to hear in its entirety, plays so gracefully as does Almazan  and, with the bass and drums creating a rich bottom, this music is gets inside you and does not let go.  To find out more, go to www.chrisdingman.com.

Dingman also appears on drummer Harris Eisenstadt's "Canada Day 2" (Songlines Records), a recordingripe with possibilities which one can really hear when you see the band live.  The CD is quite good but the current lineup (also including original members saxophonist Matt Bauder and trumpeter Nate Wooley plus newcomer bassist Garth Stevenson) really shine.

Other 2011 faves include the delightful "Noneto Iberico" (Brooklyn Jazz Underground Records), yet another suite of tunes that celebrate composer and bassist Alexis Cuadrado's Catalan upbringing. Infectious dance shares the musical stage with soft ballads, performed by a wonderful nonet including saxophonists Perico Sambeat and Loren Stillman, pianist Dan Tepfer, trumpeter Avishai Cohen, trombonist Alan Ferber, his brother Mark on drums, guitarist Brad Shepik and percussionist Marc Miralta (4 of the 8 tracks feature a Flamenco "handclap" trio).  I love the way this music flows and how the musicians inhabit these with their talent and their soul. It's hard to sit still during the moments when this music hits the groove.  To find out more, go to www.bjurecords.com.

In the final installment of the "Best of 2011" will be a nod to "Mulberry Street", the sweeping new big band sounds of Jeff Fairbanks Project Hansori (also on BJU), plus a look at the incredible streak of fine releases by So Percussion, several fine piano CDs by people mentioned above, and a tribute to an American poet by one of the more impressive musician/composers on the planet.

In the meantime, I leave you with a piece from the Rob Garcia 4:
The Return (mp3)
Posted by Richard B. Kamins at 8:59 PM