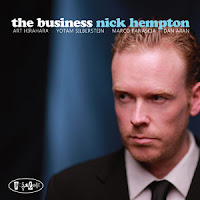 Saxophonist Nick Hempton has got something good going-on in his sophomore release, "The Business"  (Posi-Tone Records). If you just put the CD on and go about your business, this sounds like fairly solid, straight-ahead, "post-bop."  When you listen closely, you hear a real band at work.  Whether it's singing, swinging, lines of bassist Marco Panascia or the inventive drumming of Dan Aran, this music is, for the most part, filled with joyous moments.  Then, there are the voicings and flights of fancy from pianist Art Hirahara and all one needs is some good tunes to "blow" on. Mr. Hempton, a native of Australia, has been leading the band for the better part of 5 years and one can easily hear that they are comfortable with each other. Guitarist Yotam Silberstein joins the group on a number of tracks and he, too, fits right in.

Whether it's the martial strut of the drums on "Press One for Bupkis" (with a melody line that echoes that of "To Life" (from "Fiddler on the Roof") or the low-down blues of Don Redman's "Gee Baby, Ain't I Good to You" (where Hempton's tenor has the weight of the best work of Ben Webster), this is so much more than "background" music.  The other "cover" tune is an inspired choice.  The quartet dances its way through Rahsaan Roland Kirk's "From Bechet, Byas, and Fats"- in the second half of the song, the band doubles the pace for a romp of a solo from Hirahara followed by a ever-shifting exchange of the drummer with the rest of the group.  Hempton displays a lighter tone on the handsome ballad "Encounter at E"; listen to the piano accompaniment, spare yet effective or Aran's "conversational" drums and the way Panascia propels the piece (nice, melodic, solo as well.)  Everyone gets "funky" for "Not Here For a Haircut", Hirahara's Fender Rhodes dancing atop the "fatback" drums, the chunky rhythm guitar and the bouncing bass.  Hempton, in contrast, takes a measured solo, filled with melodic flourishes, giving way to Silberstein's bluesy turn.  There's a bit extra bounce in everyone's step on the closing tune, a "hot" number called "Carry On Up The Blues." This is definitely one of the "happier" blues tunes you'll ever hear.

The CD is in Nick Hempton's name and, while he wrote the majority of the tunes, the success of this music is in the spirited work of all involved.  If somebody going to give you "The Business", don't say no!

Here's a tasty track for you to download, courtesy of Posi-Tone Records and IODA Promonet:
Flapjacks In Belo (mp3)

Guitarist-composer Brent Canter, born and raised in Los Angeles, California, wisely titled his debut recording for Posi-Tone Records "Urgency of Now." One can hear he has a story to tell and is so ready to tell it.  Joined by his working Trio of Adam Klipple (organ) and Jordan Perlson (drums) as well as special guests Pat Bianchi (organ on 3 tracks) and Seamus Blake (tenor saxophone), his music has well-formed melodies, is spacious when it needs to be and "rocks out" on several occasions.  "Meet Me Halfway" features a guitar tone that may remind some of Carlos Santana as well as a strong melodic line built by both the guitarist and Bianchi.  Perlson pushes and pulsates while the soloists ride his flow.  Another fine melodic piece is "Settle Down", a gentle ballad that is soulful and emotionally rich.

There are several tunes that really jump out of the speakers.  "With Eyes Closed" builds up from the drummer's exciting opening salvo but, instead of going "all-out", Blake and Canter read the melody as Klipple (who leads the quartet Drive-by Leslie) burbles beneath them.  His solo starts in the lower registers of the organ and grows in intensity with the help of Perlson's slashing drum work.  Canter also starts in a subdued fashion but is soon pushing against the insistent drum work and big organ chords. Blake just "gets down" and rides the percussive waves to an exciting finish.  "A Long Way From Home" is another tune that blends a soulful approach, forceful, funky, drumming, and spirited solos from all.

"Urgency of Now" has excellent sound; one can really pick out the individual instruments, even when the musicians are moving through intense sections.  It should come as no surprise once you hear the fine music on this CD that Brent Canter won the 2011 ASCAP Young Composers Award.  There are moments that his tone and attack remind this listener of John Abercrombie (especially in the way the elder guitarist builds his solos.)  This impressive CD is yet another fine example how contemporary music continues to grow well into its 2nd century.  For more information, go to www.brentcanter.com.

Lately, I have been receiving weekly emails from the Cornelia Street Cafe, located at 29 Cornelia Street in New York City.  Their food is quite fine but their menu of "live music" is totally delectable.  Many of the finest creative musicians get to play there - in the coming week alone, vocalist Lainie Cooke plays there tonight (7/12/11) with a ensemble featuring drummer Matt Wilson while on Friday (7/15), pianist-composer Matt Mitchell brings in a group featuring guitarist Mary Halvorson, saxophonists Tim Berne and Oscar Noriega, bassist John Hebert and drummer Tomas Fujiwara. The following night, bassist Mario Pavone presents his "Arc Suite" ensemble featuring Matt Wilson, pianist Craig Taborn, saxophonist Tony Malaby and others.

Get the idea - this is serious venue for fans of this music.  So, if you plan a jaunt to the Big Apple, I strongly suggest heading to the Cornelia Street Cafe.  To find out more, go to corneliastreetcafe.com and get excited.
Posted by Richard B. Kamins at 12:14 PM