Music for Duo + Music for Ten 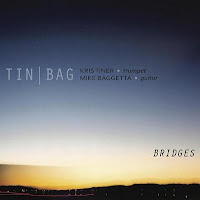 Bridges - TIN|BAG (Mabnotes Music) - This duo takes its name from trumpeter Kris Tiner and guitarist Mike Baggetta, the former based on the West Coast, the latter on the East.  When they get together, they make music that is intimate, often spare, quite musical yet also conversational.  After all, the best creative music, large or small ensemble (even solo), is made up of conversations between people "talking" on their instruments.

On "Bridges", their 3rd CD, one is quite aware of the other member of the group - silence.  These pieces grow from melodies but neither feels the need to fill every second with sound.  The tunes go in unexpected directions.  For instance, "Maslow" opens with solo trumpet playing a poignant, spare, melody; when the guitar enters, he plays "tolling" chords before moving out of tempo as Tiner plays above.  They seem to moving apart from each other, at times, but always forward.  Baggetta's solo is short, minimalistic, with chords that ring.  The opening piece, "Bobo", has a melody that references "Autumn Leaves" and a rhythm, delivered by guitar, that alternates between clearly stated and "felt."  The title track, one of two composed by Baggetta (6 are from Tiner's pen and the CD closes with Bob Dylan's "Just Like a Woman")  has the feel of a Southern folk song, the guitarist moving slowly through the opening 2 minutes by himself, with clearly articulated lines.  Tiner's muted trumpet as a stately feel, just a hint of blues with occasional smears and subtly bent notes.  The piece shimmers, like sunlight reflecting off a lake barely brushed by a breeze.  "Inayat Khan", named for the Sufi master, is solo trumpet, muted again, a melody moving slowly, clearly, softly, humbly, with obvious calm.  As it fades, the duo moves into the Dylan tune; again, they do not rush through but stay close to the melody.

"Bridges" contains beauty built of melody, interplay and friendship.  One might say this is "escapist music" of the highest order, not raging against the inequities of the everyday but a celebration of the creative spirit that Kris Tiner and Mike Baggetta bring to their collaborations.  We are the beneficiaries.

Glow - Pablo Held (Pirouet) - This is the 3rd CD release for the 24-year old German-born pianist-composer Held and his first for large ensemble.  This is a fascinating 10-member group, with saxophonists Sebastian Gille and Niels Klein, trumpeter Menzel Mutzke, the harp of Kathrin Pechlof, bassists Dietmar Fuhr and Henning Sieverts (who doubles on cello) as well as Held's teacher Hubert Nuss (celesta, harmonium) and the leader's usual Trio mates, drummer Jonas Burgwinkel and bassist Robert Landfermann.

With such a varied lineup, the music goes in many directions.  The title track starts ever-so-softly, the tinkling keyboards, the low, long, tones of the reeds and brass, the volume growing steadily over 8:30 until the 2 minute fade back to silence.  The opening track, slyly titled "Is This the End", rides in on a steady beat with voices rising out of the mix such as the soprano saxophone and drums. "LP" feels like a "big-band jam" with a rousing solo over the active rhythm section; the basses gleefully move around each other while Burgwinkel goes into attack mode.  Held takes a fine solo, hopping atop the drums for a hard-edged romp.

Throughout the program, the arranger Held mixes and matches. On "Secret", it's the bowed bass and pizzicato/bowed cello leading the way for a good portion, continuing their dialogue beneath the lengthy piano solo. "This is What I'm Asking For" is a brooding yet powerful work that may remind listeners of the big band sounds of Muhal Richard Abrams.  It reaches its first climax halfway through and, just as you think it's fading away, the basses and drums move into a propulsive rhythm for a tenor solo that brings the piece to an equally rousing climax. The program closes with a composition by Peter Held, the leader's father.  It serves as a fitting close, softer, quite melodic with sections for solo harp and a long fade with piano and celeste quietly sharing the melody.


At times, "Glow" is reminiscent of Miles Davis' "Filles de Kilimanjaro" and "In A Silent Way" - it shares those recordings' sense of exploration and freedom.  Held is not afraid to take chances and succeeds more often than not.  The swirl of the basses, the reeds rising and falling, the exciting drums, the impressive piano work, stays in one's memory long after the music fades. Sprawling and adventurous, the music of young Mr. Held shows much promise.  To find out more, go to www.pirouet.com/home/news.php and follow the links.
Posted by Richard B. Kamins at 10:04 PM