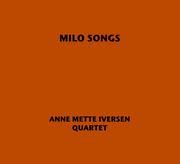 Milo Songs - Anne Mette Iversen Quartet (Brooklyn Jazz Underground Records) - The first impression of this music is that it reminds me of Andrew Hill.  Ms. Iversen, a native of Denmark, based this music on a melody her son Milo sang over and over again.  The composer/bassist mother heard something special in the son's song and built a musical narrative from it for Quartet.  Joining the bassist is John Ellis (tenor saxophone, clarinet), Otis Brown III (drums, cymbals) and Danny Grissett (piano). This is the 4th recording for this ensemble and one can hear that, happily, familiarity fosters creativity.

Where do I hear Mr. Hill in this music?  It's in the way the bassist is the "rhythm" while the drummer "solos" beneath the tenor sax and in the way the songs seem to move out from the melody but (nearly) always stay true to the harmonies.  Listen to the wonderfully episodic "Drum Dreams" where, in the opening moments, all 4 have melodic roles. The bass line moves alongside the clarinet as the piano accentuates the theme played by the drum. Grissett takes the first solo, an easily unfolding series of short phrases punctuated by longer runs. Brown and Ms Iversen create a slow yet steady pace and then the drum solo building off the final phrases of piano. The pace picks up for "Milo's Brother" yet the rambunctious rhythm is paired with a strong melody. Ellis's tenor solo moves quickly over the poly-rhythmic work of Brown but pay attention to Grissett's lines. He refers to the opening melody, reacts to the drummer's action and does not so much fill out the sound as create alternate colors.

There is little clutter in this music, it does not shout; instead, it has a playful quality (for instance, "The Storm" opens with the tenor sax and piano conversing, not arguing, leading the bass and drums
into the rest of the song) that allows the musicians to be themselves inside Ms. Iversen's "musical house."  Andrew Hill often created "thorny" music that challenged both musician and listener but,throughout his life, his music seemed to both expand and contract, to reflect his experiences yet always be searching for something beyond the physical borders of the composition.  Anne Mette Iversen's also has that quality, with structures that expand and contract, melodies that do not imitate the style of Hill but continually move forward.  The musicians "talk" to each other and us through the music, making "Milo Songs" a truly fine experience. To find out more, go to www.annemetteiversen.com.
Click on the link below and you'll hear an example of this excellent music (courtesy of BJU Records and IODA Promonet.)
The Storm (mp3)

Hues of a Different Blue - Rufus Reid & Out Front (Motema Music) - Bassist/composer Reid's "blues" are definitely of a "different" hue that one might expect.  The smile on the cover gives it all away - this is joyful music, not gospel, but jazz that swings and sings, at times makes one wiggle in his chair.  While the Trio - pianist Steve Allee and drummer Duduka Da Fonseca - are dubbed "Out Front", there in no doubt that this is Reid's band.  Unless you have the tinniest speakers, you cannot help but hear the bass parts.  The low notes "boom", the overtones stand out, and his majestic solos can be heard on many of the 14 tracks. There are fine guest appearances by tenor saxophonist JD Allen (3 tracks), trumpeter and flugelhorn player Freddie Hendrix (3 tracks), guitarist/vocalist Toninho Horta (3 tracks) and alto saxophonist Bobby Watson (2 tracks).

Highlights include Reid's "When She Smiles Upon Your Face", a sweet samba on which all the participants appear.  Allen and Watson take consecutive solos; both acquit themselves well.  Horta's acoustic guitar stands out on this cut and on the following track, his own piece, "Francisca".  It's just Horta and Reid working together, the full-toned bass dancing around the nylon-string guitar and Horta's soft vocals.  Da Fonseca snappy drum work ushers in the quaintly-titled "Lower Burellian Bicycle Loop", composed by saxophonist Don Aliquo.  Allen shines here, riding the waves of percussion and the handsome piano accompaniment.  Reid's "walking" lines truly propel the piece forward.  The bassist and Watson play "These Foolish Things", the second duo track on the program; they complement each other well, the alto sax taking the melody up as the bass fills out the bottom.  "Memories of You" is a tour-de-force for Reid, his finely-articulated lines setting the sonic table for Allee's sympathetic piano work.  The long bass solo holds one's attention because Reid thinks melody before technical prowess.

There's more to discover, from Hendrix's richly woven flugelhorn on "The Eloquent One" (a Reid composition dedicated to the late Hank Jones) to the hard driving title track that close the disk.  Hendrix really shines on his forceful solo while Allen pushes against the beat and Watson rolls with the punchy rhythms.  And, Allee is so good every time he touches the keyboard one might overlook his work, but don't - pay attention.

As compared to the Anne Mette Iversen Cd above, "Hues..." does not have the thematic presence or the gravitas (the "weight" does not mean it's too serious.)  Still, the interaction of the musicians, the excellence of the soloists and Reid's personality shines through.  To find out more, go to rufusreid.com.