Firehouse 12, 45 Crown Street in New Haven, moves into its final 3 Fridays (deep sigh...) and 2 of the concerts feature groups led by bassists.  This Friday (May 27), Ben Wolfe returns to the performance space as a leader for the first time since 2008 (the bassist has been a sideman 5 times) with a quartet that features Joe Saylor (drums), the fine young saxophonist Marcus Strickland and Hartford native Josh Evans on trumpet. Wolfe has worked with the Lincoln Center Jazz Orchestra, Branford Marsalis, Diana Krall, Harry Connick, Jr. and scores more. He's issued 6 CDs as a leader, the latest being "Live at Smalls", issued earlier this year (my review is here.)

The only holdover from that CD is Strickland but, knowing Wolfe's creativity, this band should have many challenging and exciting pieces in its repertoire.  For ticket information, call 203-785-0468 or go to www.firehouse12.com. 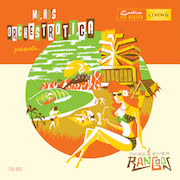 For those of us who grew up in the late 1950s and early 60s and listened to AM radio, we probably heard the somewhat strange music of Martin Denny.  In the midst of "doo-wop", the rise of Motown and Elvis, Denny's music, much of it influenced by his move to Hawaii in 1955, was based around the marimba, percussion and the instruments he collected from places around the world.  Denny had several Top 20 singles, including "Quiet Village", "A Taste of Honey" and "Ebb Tide."

Here in 2011, we have Mr. Ho's Orchestrotica, a quartet based in the Boston, Massachusetts area.  The brainchild of percussionist Brian O'Neill (who plays many different instruments including vibraphone, bohdran, pandiero and bird calls plus others), the band's debut 2010 CD, "The Unforgettable Sounds of Esquivel", featured a 22-piece band dedicated to the music of composer/arranger Juan Garcia Esquivel (who created a fascinating body of work in Hollywood in the late 1950s.)

For Mr Ho's second CD, O'Neill returns to his quartet formation for "Third River Rangoon" (Tiki Records).  Despite the "retro" cover, the music takes many interesting paths in its 44 minute journey.  Featuring Geni Skendo (bass flute, c-flute), Noriko Terada (percussion, marimba, vibraphone) and Jason Davis (acoustic bass) as well as guest Tev Stevig (oud on 2 tracks), the 11 instrumentals have a calming effect on one's system.  Stevig's oud enlivens the band's version of Tchaikovsky's "Arab Dance" and the O'Neill original "Autumn Digging Dance" - the two play together in soprano Julia Madeson's Aljashu, a band dedicated the music of the Sephardic Jews from Spain and the influence of that music can be clearly heard on the tracks that feature the oud.  There are also tracks composed by Cal Tjader ("Colorado Waltz") and another king of "exotica", Milt Raskin ("Maika") while the rest of the program is original material.  O'Neill and his band do not treat this music as an oddity or "museum piece", no tongue-in-cheek performances; really, this is a pleasing collection that has fine melodies, short yet good solos, and fills the room with its expansive sound. Skendo's flute flutters and soars above the full-toned bass lines and soft percussion on "Thor's Arrival" and displays a Brazilian influence on the Tjader piece.  The rhythm section does yeoman's work, whether it's Davis's bowed bass beneath the oud on "Arab Dance" or Ms. Terada's shakers and cymbal work on "Terre Exotique." The rich bass counterpoint on "Moai Thief" and the hushed yet propulsive percussion on the title track captures the ear without taking away from the O'Neill or Shendo's solos.

Mr. Ho's Orchestrotica, unlike Sex Mob's hard-edged take on Martin Denny titled "Sexotica" (released in 2006), takes its "exotica" seriously but not to the point of  humorless reenactments or straight satire. The music is "cool" but not cliched, fragrant with the aural perfume of the South Seas and Hawaii.  And, it's fun to listen to.
For more information, go to orchestrotica.com.

Below is a link to the upcoming CD release, "Mulberry Street" from trombonist/composer Jeff Fairbanks' Project Hansori to be issued in June on BJU Records.   When I first played the CD, the music, a heady blend of Korean and Chinese folk music with big band jazz, played by a 22-piece ensemble just knocked me out.  Produced by Darcy James Argue (who  knows a thing or 2 about large ensembles) and featuring several members of his Secret Society as well as the fine young bassist Linda Oh and guest baritone saxophonist Fred Ho, this wonderful coalescence of traditions and imaginative arrangements is worth your attention. Thanks to BJU and IODA Promonet for the generous taste below - a full review will be posted in several weeks.  In the meantime, go to www.fairbanksmusic.com and follow the links to Project Hansori.

More On This Album