Paraphrase - Matt Blostein/Vinnie Sperrazza Band (Yeah-Yeah Records) - Alto saxophonist Blostein and drummer Sperrazza met in 2002 and began formulating a sound which culminated in the recording of their debut CD in 2006 (released 2008).  For their second recording, they have created a quartet with trombonist Jacob Garchik and electric bassist Geoff Kraly.  Sperrazza has been a member of pianist/composer Noah Baerman's Trio for several years, has issued several piano trio CDs (featuring pianist Jacob Sacks) and is one of the more dynamic players on the scene.  Blostein is less well-known to me but his clear tones and thoughtful lines work well in this outfit. Both the saxophonist and drummer wrote 4 works for this program.  Blostein's pieces tend to be more episodic - for example, "Helicopters" grows from a quiet melody in which the trombone and alto seem to shadow each other into solo sections for sax, trombone and bass over varying tempos.  Sperazza's works combine melody and percussion in ways that immediately capture the ear.  "One Hour" builds off of a dynamic drum intro and continually picks up speed as it moves forward. Solos merge into each other, the sax and trombone picking up each other's cues. "Duet Aria" opens with the saxophone in conversation with the drums, then the trombone begins the dialogue. After the bass enters, the piece moves forward with the front line carrying on the musical chat.  You can tell they are listening to each other, feeding off each other's melodic ideas and the insistent prodding of the rhythm section.  Much of this music goes in unexpected directions.  Blostein's "Bullfrog" is energetic, especially in the rhythm section's initial drive and then continue to push beneath the solos. Kraly's solo is quite melodic and calms the pace leading into Sperrazza's short break before the repetition of the main theme.
Sperrazza penned the lovely, heartfelt, ballad that closes the disk.  "Let Your Arms Fall Down" may remind some of a song by The Band, with a melody that seamlessly blends blues, folk and gospel influences. Blostein's alto solo is a sweet abstraction on the theme while Garchik returns time after time to elements of the original melody to shape a short yet sweet statement.
"Paraphrase" is finely crafted music that is never forced or phony, created by people who are relating on many levels and never ignoring the human element.  This is music to feed the soul and succeeds handsomely. To find out more, go to www.mattvinniemusic.com.  The CD will be released on February 15.

Flora. Fauna. Fervor. - Matt Ulery's Loom (482 Music) - In 2008, bassist/composer Ulery, a resident of Chicago, Illinois, released "Music Box Ballerina", one of the more unusual melodic treats of that (or any year.)  So many different musical elements went into the creation of that CD and that eclectic mix is here as well.  Loom is a real band, not a studio concoction so Ulery writes for these specific musicians who include Thad Franklin (trumpet, flugelhorn), Tim Haldeman (tenor saxophone), Rob Clearfield (keyboards), Zack Brock (violin), Katie Weigman (vibraphone) and Jon Deitemyer (drums.) This is not your typical "theme-solo-theme" program but the pieces have an orchestral approach.  The longest track, "The Queen" (10:18) opens with a theme for the horns, a repetitive electric piano figure and pounding drums - as the piece moves forward, the intensity of the interplay changes but no soloist emerges from the ensemble yet one can sense the images behind the music. And the shortest piece (3:20), "High City/Low City", is not rushed but fully realized, with the instruments moving through the multi-sectioned composition like an ice skater on a pond, gracefully with power.  "Shadow Ballerina" feels like the soundtrack to a movie set in the early years of the 20th Century, with a burnished gold light, drawing rooms and fancy clothing. Yet, the melody line and the rhythm section careers forward, almost out of control at times, its intensity tamped down by the ruminations of saxophonist Haldeman.
Brock steps out on the lullaby-like "A Winds A Blowin'" with a lovely and forceful romp over the splashing cymbals, crisp drumming and the bouncing bass lines, seemingly rushing headlong to the finish but, no, the song closes on a soft landing.  Clearfield's accordion is featured on "When I Think of You", a sweet reverie that also puts Franklin's trumpet out front.  Yet, there is always something else happening beneath the soloist to avert one's attention.
Those who feel the need to label Matt Ulery's music, take a step back.  There is so much music in this program that it feels an insult to label it.  Have fun listening to the arrangements, the rich melody lines, the attractive solos and the myriad sounds Ulery coaxes from this ensemble.  Enjoy the journey!  For more information, go to www.mattulery.com or www.482music.com. 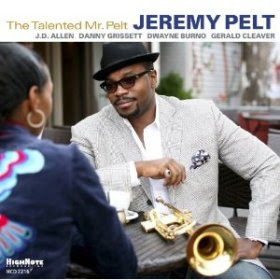 The Talented Mr. Pelt - Jeremy Pelt (HighNote Records) - This is the 3rd recording (second for HighNote) for trumpeter Pelt and his Quintet of J D Allen (tenor saxophone), Danny Grissett (piano), Dwayne Burno (bass) and Gerald Cleaver (drums.)  This is a group of leaders, friends and excellent musicians, and a real "working band."  They play music based in the sounds Miles Davis, Herbie Hancock, Wayne Shorter and others created in in the mid 1960s yet this never sounds dated.  Whether it's the high-flying "Pandora's Box" that opens the set or the sweet ballad "In Love Again" (first recorded by the late Blossom Dearie), the music is, at turns, exciting, heartfelt, funky, handsome, and very well-played (to be expected, considering the caliber of the musicians.)  Pelt has matured nicely as a soloist over the years - on "When The Time Is Right", he does not rush his solo, weaving his full-toned sound through Cleaver's active snare-and-cymbal work as well as Grissett's strong chordal work.  When he lets loose, like he does on "David and Goliath", for instance, he remains under control as the phrases ripple from his horn.   Allen is the perfect partner, with his rich tone, his smartly constructed solos and blues sensibility. Grissett continues to grow as a player; he already is an excellent accompanist. His solo on fellow pianist Anthony Wonsey's "Paradise Lost" is quite exciting without being a "knuckle-buster."
Through the entire program, the work of Burno and Cleaver is par excellence. The bassist is rock-solid yet often is playing counterpoint beneath the soloists.  Meanwhile, the drummer is busy without ever being intrusive, pushing the beat, "goosing" the soloists, creating a cushion of sounds that always engages his fellow musicians and the listener.
Needless to say, this is music that needs to be heard "live."  That said, the Quintet pulls no punches and does not hold back at any point on this CD.  If you want to shake up your speakers, "The Talented  Mr. Pelt" (quite appropriate title) will do just fine.
A look at Pelt's website, www.jeremypelt.net, shows an April 1st date for the Quintet at Firehouse 12 in New Haven, CT., followed by 2 nights (April 5-6) at the Jazz Standard in New York City.  If you like improvised music that sizzles and soothes, see and hear this band in person.
Posted by Richard B. Kamins at 2:22 PM