If my iPod stays at home or in the car (not in really cold or extremely hot weather), I have a bag that holds a number of CDs for review purposes.  On occasion, I forget to unpack the contents.  The following reviews are the result of my recent unpacking. 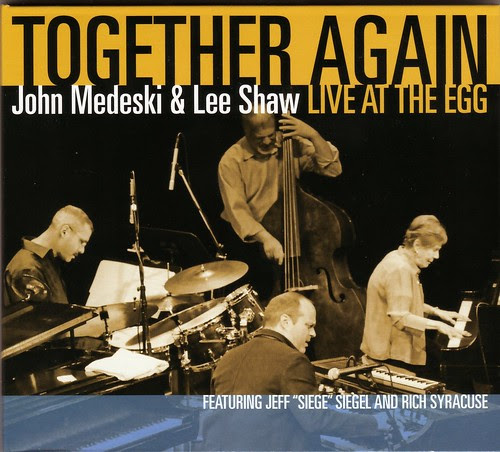 Together Again: Live at The Egg - John Medeski & Lee Shaw (ARC) - The octogenarian Ms. Shaw may not be the first person one thinks of when looking for a musical partner for the mercurial Mr. Medeski but they have a history.  When Medeski was in his early teens and Ms. Shaw was living in Fort Lauderdale, FL, he studied with her and became immersed in jazz. Now, 3 decades, the teacher and student pair up for a concert recording.  Bassist Rich Syracuse and drummer Jeff Siegel, Ms. Shaw's rhythm section, join the pianists and the results make for an enjoyable hour of music.  Right off the bat, the program, recorded live in Albany, New York, opens with a group improvisation.  "Lizards" scurries at times and moves quite deliberately at others but always in a forward direction, not getting stuck in a endless repetitive rut. Medeski unpacks his melodica for the uptempo waltz "Prairie Child" (note Siegel's stick work a la Shelley Manne on Sonny Rollins' classic "I'm An Old Cowhand.")  Ms. Shaw's solo is a two-handed delight, rich with chords and dancing riffs.  "Caravan" meets "St. Thomas" at the onset of "Holiday" with bouncing bass riffs and an exciting drum solo - when the pianists enter, the piece becomes even livelier with a melody that is hummable and solos that really jump. Medeski's B-3 organ shows up on the final 3 tracks including the lovely and haunting "Tears", a piece that is just the 2 keyboards taking their time to move gently through the fine melody.  Medeski's "Wiggly's Way" closes the CD in a funky fashion with the rhythm section showing a New Orleans bent;  Ms. Shaw's solo illustrates that she can be melodic and still "get down" while Medeski pushes hard against Siegel's hard-edged percussion. I love the way the quartet takes the piece out, a fun musical conversation.
If you don't know Lee Shaw's music, you'd be wise to check out her vast discography - she's recorded for numerous labels including CIMP, Cadence Jazz Records, LuvLee Records as well as her most recent recordings on ARC (Artists Recording Collective.)  You would go not wrong starting with "Together Again."  For more information, go to www.leeshaw.org or www.artistsrecordingcollective.info.

Afterlife Music Radio: 11 New Pieces for Solo Cello - Marika Hughes (DD Records) -With the way the weather has been in the Northeast since the beginning of 2011, one needs music to really get lost in.  Ms. Hughes, best known for her work with Red Pocket, 2 Foot Yard, Charming Hostess and violinist Charlie Burnham's Hidden City, has made a unique contribution to the solo cello repertoire.  She commissioned 11 new works from contemporary composers, several of whom you might not expect to write for cello.  Drummer Nasheet Waits (Jason Moran Trio, Tar Baby) created the lovely and mysterious "Korean Bounce", more a ruminative blues than an Asian folk tune.  Saxophonist Abraham Burton is represented by "Change", a thought-provoking blend of long tones and pizzicato lines - it, too, has blues in its DNA.
Jenny Scheinman's sweet "Ba Da Bum" is a short and folky romp while bassist Todd Sickafoose (a member of the band with whom Ms. Hughes recorded her other new CD, "The Simplest Thing" ) created "Murmur", an episodic piece that is mostly arco (bowed) but closes with an intense then peaceful pizzicato (plucked) section.  Bassist Trevor Dunn's "Singulus" opens quietly and has a fascinating blend of melodic fragments and longer tones. The title track, courtesy of multi-instrumentalist Shahzad Ismaily, moves slowly and quietly until 1/3rd of the way through its 6 minutes, sharply bowed notes erupt and lead to what sounds like a bowed "walking" bass line and back to a more pensive mood. "Bring In the Nasty", composed by Raz Mesinai (co-producer and engineer of the recording), offers harsher tones and a circular melody line that goes on relentlessly until the fade.
Many different moods, tones and ideas make "Afterlife Music Radio" a musical adventure to be savored and re-explored many times.  To find out more, go to www.marikahughes.com - there, you'll read about the CD Release concert on 1/28/11 at the 92YTribeca in New York City.

A Boy's Journey - Peter Hum Quintet (self-released) - Peter Hum is an excellent jazz journalist based in Ottawa, Canada - you can (and really should) read his columns from The Ottawa Citizen by going to http://jazzblog.ca.  As it turns out, he's also a fine pianist, having played with many of Canada's finest musicians (including guitarist Sonny Greenwich, clarinetist Phil Nimmons, saxophonist Rob Frayne and bassist John Geggie (among many.)
Now, he's issued his debut CD, fronting a quintet composed of Kenji Omae (tenor saxophone), Nathan Cepelinski (alto and soprano saxophones), Alec Walkington (acoustic bass) and Ted Warren (drums). The selections are filled with handsome melodies, rich harmonies, pleasing interactions, and numerous good solos. The blend of the reeds on pieces such as "C.G." is so inviting; the pieces moves briskly atop the propulsive drumming and Hum's full chords.   Walkington's bass "walks in" the beginning of "New Toy", a piece with rolling piano riffs, Cepelinki's fine alto solo (like rays of sunshine) and a section for the bassist to take off.  "Big Lou" must be quite a character (dedicated to Hum's son Pascal) - the piece that bears his name opens with sly (and slightly bent) bass notes before Warren's funky drums and the keening horns come in.  Hum's electric piano sound is warm and his phrases ride easily atop the funky rhythms.  The title track is dedicated to the composer's father, a native of Ottawa, who, as a very young boy (4) traveled across Canada to go to China and made the return trip 10 years later.  The music has moments that move slowly before picking up in intensity (note Cepelinski's fine soprano solo over Warren's explosive drumming.) Hum's rippling electric piano leads "Unagi" (named for Japanese freshwater eels), a energetic piece that sounds a bit like Chick Corea (early Return to Forever) and featuring good solos from the reeds, the drummer as well as the pianist.
The CD closes with the longest track, "Three Wishes" - at nearly 11 minutes, the piece starts slowly, thoughtfully, a short, poetic, melody for the alto saxophone before Warren kicks the piece into a much higher gear for the solo sections.  After the saxophones take their turn, the drummer takes a fine and understated solo before the coda reintroduces the theme. A short silence follows and Hum reenters, leading the saxophonists into a short reading of the main melody - it's a very effective ending to an excellent piece.
"A Boy's Journey" is quite a strong debut for composer/musician Peter Hum, blending a penchant for flowing melodies with exciting rhythms.  When critics/reviewers make recordings (here, I'm thinking of people like saxophonist Chris Kelsey and as far back as Leonard Feather), one might think it would be easy to snipe at their shortcomings but many of the releases are well thought out, with a strong sense of direction and purpose.  It's true about Peter Hum's music and you should seek it out.
For more information, go to www.peterhum.com - Hum's description of the recording session makes for fascinating reading and you can find it by clicking here.
Posted by Richard B. Kamins at 7:16 PM