The Ones That (Nearly) Got Away (guitars)

Okay, the semester is over, grades are posted with the registrar, and it's time to get back to the reviews. 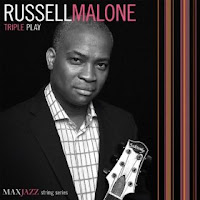 Hard to believe but "Triple Play" (MaxJazz) is guitarist Russell Malone's first trio CD.  He released his debut disk in 1992 and has had a busy, busy, career, working with the Harry Connick Jr. Big Band, organist Jimmy Smith, Diana Krall, Dianne Reeves and Ron Carter (among others.)  His first CDs for MaxJazz were quartet dates  but, for this date, he subtracted the piano.  Ably assisted by bassist David Wong and drummer Montez Coleman, the threesome swings its way through 11 tracks including 3 standards and 4 originals.  Malone displays a clean, clear, tone throughout, thinking melody and harmony first.  Wong is a first-class accompanist as well as a fine, melodic, soloist while Coleman has a funky side that shows on swingers such as "Sweet Georgia Peach" and the opening track "Honeybone."  One cannot help but dig the groove in Ron Carter's Tail Feathers" (must also mention the Wes Montgomery-like octave jumps on guitar.
If you know someone who loves the pure sound of guitar jazz (no effects, no fusion), this is the CD.  Nothing fancy, no pedal works, just a melodic approach to everything Russell Malone and the Trio does. To find out more, go to www.maxjazz.com.
Here's the opening track, "Honeybone", courtesy of MazJazz and IODA Promonet.
Honeybone (mp3) 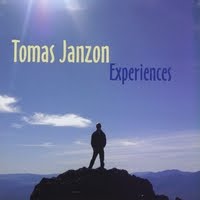 Swedish-born guitarist Tomas Janzon has lived in the US for nearly 2 decades and "Experiences" (Changes Music) is his 4th release as a leader.  Not only is he a skilled guitarist but he also knows how to put together a band.  The great Albert "Tootie" Heath is in the drumseat and he is a man who knows when to push, when to support and when to step out.  His snare-drum work is impressive throughout. no more so than on "Float", where he demonstrates how his well-known mastery of brush work.  Bassist Jeff Littleton is the glue of the band as well as a fine soloist.  His fine counter-point on ""En DeJlig Rosa", a Swedish folk tune, is a highlight.  Art Hillery provides piano or organ on 6 of the 11 tracks, nothing fancy but just right.  He gers "lowdown" on Jimmy Smith's cooker "Messin' Around" and displays similar funkiness on piano for "Moanin'", the Bobby Timmons classic.  For his part, Janzon swings lustily when called for and caresses the melody lines on ballads.  If you're a jazz fan, you have probably heard dozens of versions of "Polka Dots and Moon Beams" but few as pretty as Janzon's take.  His tone is similar to Russell Malone's but he seems more influenced by be-bop.  "Experiences" is a delightful excursion, one worth your time and a great gift idea for someone who likes guitar-jazz.  For more information, go to www.tomasjanzon.com.

Guitarist Sean Clapis (pictured right) is a 24-year old native of Hartford, CT, who studied at the Artist Collective, the Academy of the Performing Arts High School and a graduate of the Hartt School of Music at the University of the Hartford.  But, plenty of schooling doth not a musician make (gives good perspective though.)  In the past few years, he's been teaching and playing a lot of gigs throughout New England.  He also has found time to release his debut CD.  "Convergence" is self-released and features music from 3 sessions, the earliest in July 2008.  His style and tone is influenced, most notably, by Pat Metheny and John Scofield, crisp single-note lines that ripple out above the rhythm section.  He's not a shredder or a techno-geek, thinking melody first even in his solos.  "Mother" is a lovely ballad, a piece where no aspect is rushed, the solos thoughtful (also note the fine bass work of David Baron) and, even near the end when the intensity picks up, the song never loses its focus.  The addition of saxophonist Jovan Alexandre on several tracks makes a welcome addition.  The Joe Henderson-inspired "Isle of Fogo" is a pleasing high-energy romp, replete with roaring tenor sax, McCoy Tyner "power" chords from pianist Lemuel Gurtowsky, and a short yet powerful guitar solo. Alexandre and Clapis share the melody on "You Will Do Great Things", a handsome piece more about exposition of melody than technical prowess.

"Convergence" is a good calling card for Sean Clapis, a recording that lays out his future as a musician, bandleader and composer.  The sound quality is a bit muted (good for the guitar, not so for the rhythm section) yet that is a minor glitch.  To find out more, go to www.seanclapis.com.

If you get the opportunity, see the young man in person.  Caught the guitarist in a duo setting with pianist Noah Baerman at The Buttonwood Tree in Middletown.  It was their initial collaboration and, admittedly, took a few tunes to get the mix right.  When they did mesh, the music was rewarding, rich with melody and strong solos.  Clapis became more assertive as the night progressed and allowed himself to dig into his solos for creative possibilities.  Baerman gave great support (nothing fancy just right there) and soloed well, often with bluesy abandon, always with creativity.
Posted by Richard B. Kamins at 8:55 AM