The first time I heard the music of Willem Breuker, who passed today at the age of 65, must have been in the late 1970s.  I had begun a correspondence with Bob Rusch, publisher/editor/writer for CADENCE Magazine.  There was a review of the Breuker's Kollektief "Live In Berlin 1975" (FMP Records) and I became curious. We talked, I purchased and I began to dig into the Dutchman's music. Breuker mixed it up - his 10 piece band (later to become 11) tackled thorny original music, filled with twists, turns, squawks, honks, pounding rhythms, and "wild" melodies.  The ensemble tackled Weill, Gershwin, Satie, oratorios, film music, musical theater, television and more.  He hired great musicians, players who could read and improvise without fear. He started his own label, BVHAAST, at a time when few musicians were doing that, documenting not only his own music but that of his band members and other Dutch and European composers/musicians.

Willem Breuker, born in Amsterdam, began his musical career in the1960s,.  He played with many of the European "New Jazz" players, such as Peter Brotzmann, Han Bennink and Misha Mengelberg(with the latter 2, he formed the Instant Composers Pool (ICP).  He organized the Kollektief in 1974 and the band plus the label was the main source of his musical output.  He played in all sorts of settings, in many different-sized ensembles, with string sections, chamber groups, and whoever could play his music. He never rested on his laurels, always moving forward, always challenging audiences and listeners.  To find out more, go to www.xs4all.nl/~wbk/. 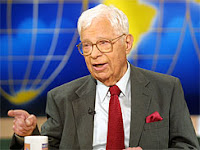 Commentator and reporter Daniel Schorr also passed today and one can read any number of tributes (npr.org., cbsnews, etc) but there is one memory of Mr. Schorr that I want to share.  He came to speak at Wesleyan University shortly after the events of September 11, 2001.  He wondered aloud about President Bush's reaction - though the President dubbed the terrorist attack as an "act of war", he told Americans to go shopping.  Schorr thought back to World War II and the weeks after the attack on Pearl Harbor. President Roosevelt made sure to tell his constituents that this would be a time of sacrifice, that every citizen needed to pitch in for the war effort.  Schorr shook his head at the notion of "going shopping." Today, a small percentage of Americans are soldiers or nurses, doctors or pilots and some continue to return to Iraq and Afghanistan, many choosing of their own volition to go back. Yes, it's a such different world than the days of World War II and even Vietnam. News has become entertainment, often personal opinion instead of reporting. Daniel Schorr was a reporter who became a commentator, an elder statesman, a trusted voice and he worked right up until the end.  He, too, will be missed.
Posted by Richard B. Kamins at 12:15 AM