More Drummers in Charge, A Master Guitarist, and a Live Call 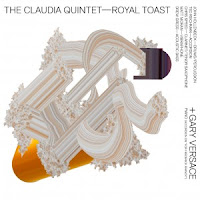 Royal Toast - The Claudia Quintet + Gary Versace (Cunieform Records) - Critics and reviewers have a tendency to use well-worn labels to describe music, words like "mainstream", "bebop", "post-bop", etc.  Every once in a while, one comes across music that defies categorization - in the case of "Royal Toast", one, even two, labels would not do this excellent recording justice.  Composer/drummer Hollenbeck has influences ranging from contemporary classical to African/Asian percussion to "pop" music and beyond.  Through the course of "..Toast", I hear hints of Frank Zappa, Hatfield & The North, Steve Reich, Steely Dan, Terry Riley and more.  What's so impressive about this music is how "uncluttered" it is. You put 6 musicians/improvisers in a room, it's bound to get noisy but composer/arranger Hollenbeck knows exactly what he wants.  There are high-energy pieces here, such as the title track and "Keramag", yet every instrument can be heard (in the case of bassist Drew Gress, his contributions are more "felt" than "heard" at times.) The blend of the "reed" instruments, Chris Cheek's clarinet or tenor saxophone and Ted Reichman's accordion is quite appealing while the addition of pianist Gary Versace adds another color alongside the vibraphone of Matt Moran.
There is a sense of solemnity to "For Frederick Franck" (Versace adds a second accordion), a touch of "free music" in "Paterna Terra" and a funky bounce to "Zurn." Tempos often shifts within songs and solos are short yet highly expressive.  Each member of the group gets a short solo piece (4 of the 6 actually are duets with themselves) and all serve as introductions to longer pieces. If you've not discovered The Claudia Quintet, start here and then find the group's other 3 CDs on Cunieform. Each is a world unto itself and well worth your time.  To find out more, go to www.johnhollenbeck.com. 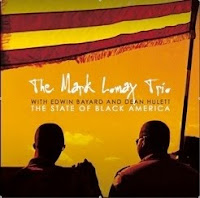 The State of Black America - The Mark Lomax Trio (Inarhyme Records) - The fire and drive of this program will remind many of the "Great Black Music"of the 1960s, music inspired by John Coltrane, Albert Ayler, Amiri Baraka, and into the 70s with Oliver Lake, Billy Harper, David Murray and later on in the music of David S. Ware.  This is music about race and identity (and don't kid yourself if you think the election of President Barack Obama "solved" the racism issue in the United States.)  Lomax's works, written and recorded 11 months before the 2008 election, are informed by blues patterns, gospel music, the "freer" aspects of Charles Mingus' music and "soul" music (listen to "Blues for Charles", you'll understand what I mean about "soul.") Lomax's partners are tenor saxophonist Edwin Bayard and the big-toned bassist Dean Hulett.  Each plays with passion and intent, never stepping on the other's lines, giving strong support - hear how Lomax opens the ballad "The Unknown Self" with a drum solo and how he sets the tone for the deliberate bass lines and Bayard's whispery tenor work. There are moments on the opening cut, "Stuck in a Rut", where the Trio "wails" with abandon but never loses its focus. More righteous blowing on "To Know God is to Know Thy Self" where the 3 musicians let loose (Lomax's thundering drums below the raging saxophone solo is a joy) and there is a catharsis that leads into the slow blues of "...For Charles."
Mark Lomax and Trio have created a program that is visceral and soul-searching, music that should be heard "live."  That it sounds this vital as a recording makes one believe it could be breath-taking in  concert setting.  To find out more, go to www.inarhymerecords.com or www.marklomaxii.com. 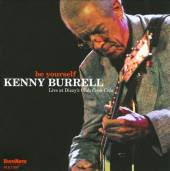 Be Yourself - Kenny Burrell/Live at Dizzy's Club Coca-Cola (HighNote Records) - Kenny Burrell turns 79 at the end of July and remains a busy teacher and touring musicians. On the jazz scene since the mid-1950s, he's recorded over 40 Lps and CDs as a leader and appeared as a sideman on over 200.  Often described as a "conservative bop" player, Burrell really loves melody and his solos are often pleasing blends of percussive riffs and flowing phrases.
This CD, recorded in September of 2008, finds him leading a band featuring the fine pianist Bennie Green, stalwart bassist Peter Washington, solid drummer Clayton Cameron and is the recording debut of tenor saxophonist/flautist Tivon Pennicott. Cameron is the sparkplug on the uptempo tracks, setting down hearty rhythms and displaying excellent cymbal work (he kicks nice and hard on Billy Strayhorn's "Raincheck".)  Green rarely disappoints (his work on Anat Cohen's new CD is super) whether he's acting as an accompanist or stepping out smartly as he does on "Tin Tin Deo" and the Strayhorn track.  Blue Bossa" is both; a blues riff over a snappy bossa nova feel. The guitarist strums, plucks and picks through a shrt solo before yielding the spotlight for Green's two-handed dance.  Pennicott has a good round tone on tenor - his highlight is a sparkling, Coleman Hawkins soaked, romp on "In A Sentimental Mood."  His flute solo on the guitarist's "Listen to the Dawn" is fine and lyrical. Washington bounces, walks and slides through Burrell's "Bass Face", originally composed for Ray Brown.  His long, funky, solo sets the pace for the guitarist's rippling riffs and bluesy asides.
Like any good master player, Kenny Burrell gives his band plenty of time in the spotlight as well as making the most of his own solo time.  "Be Yourself" finds him sans accompaniment - the ballad has a lovely flow and Burrell's flourishes at the end of each line are swift bluesy phrases.  He dips and dances his way through "Raincheck" with a boyish enthusiasm that is irresistible.
"Be Yourself" is most likely a phrase Kenny Burrell uses with his students.  A ageless player, he continues to please audiences with his sweet sound and melodic pieces. 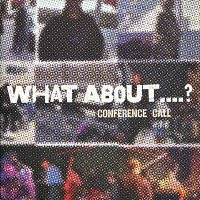 What About...? - Conference Call (NotTwo Records) - Having seen Messrs. Gebhard Ullmann (saxophones, bass clarinet), Michael Jefry Stevens (piano), Joe Fonda (bass) and George Schuller (drums, percussion) in concert several times, I know how fiery and playful their interplay can be.  This 2-CD live set, recorded in Krakow, Poland, on 2007, is a good example of the band's work and play.  There's an immediacy to the sonic quality, the quartet is well-miked, and no one instrument overwhelms the others. Ullmann has a big sound, especially on tenor, yet listen how Schuller eggs him on "Litmus" and how Stevens prods underneath with the booming bass pulsating against the martial drumming. Fonda and Schuller have worked together on many occasions and are comfortable nudging each other.  They can do their "own thing" and know there's a firm underpinning.
"What About The Future?" is a fascinating ballad - there is a nearly inaudible bowed bass solo leading to an equally quiet piano spot. The piece also has a handsome melody that does not show up until 2/3rds of the way through. This is a band that does "quiet" well, drawing the listener in.  They can be noisy, exuberant and downright silly.  Disc 2 features Stevens' "Could This Be a Polka?", a piece that has an Eastern European feel in its initial melody but, sadly, loses its way. Give the band credit - they have no fear and there are nights when you're listening to the group in person and music like this catches your fancy.
Conference Call has been a collective for over a decade, playing in venues throughout North America and Europe.  Each player brings different influences to the music and they are quite compatible. Seeing them live helps one to listen to their CDs as you can see them interacting in your mind's eye.  For more information, go to www.gebhard-ullmann.com.
Posted by Richard B. Kamins at 9:40 PM