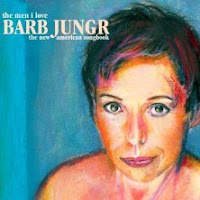 The Men I Love: The New American Songbook - Barb Jungr (NAIM) - Every several years, some one decides to mine the catalogues of contemporary songwriters and cast their songs in a new light.  British-born vocalist Barb Jungr has recorded CDs worth of material by Bob Dylan, Nina Simone, Elvis Presley and other modern composers, so her new disk, created for an appearance at The Cafe Carlyle in New York City, comes as no surprise.  I was immediately won over by the sweet and touching reading of Todd Rundgren's "I Saw The Light", with the fine work by cellist Frank Schaefer.  Her honest take on Bruce Springsteen's "The River" features co-arranger Simon Wallace's contemplative piano and more fine cello.  There was a time when David Gates& Bread were all over AM radio with their (somewhat) treacly love songs but Ms. Jungr's take on "Everything I Own" cuts through any glossiness with an honesty born of experience.
Jungr and Wallace arranged these pieces without clutter or extravagant orchestrations. Her voice is right "up front" as our the emotions of the songs, underscored perfectly by the truly excellent cello arrangements.  There are dozens of versions of Jimmy Webb's "Wichita Lineman" but few with such emotional strength.  She avoids the anger of Paul Simon's "My Little Town", imbuing the words with a sense of resignation and an understanding how the world changes people and places. They take Bob Dylan's "You Ain't Going Nowhere", spruce it up with gospel piano chords and the humor of the lyrics stand right out.  The best makeover goes to "I'm A Believer" (Neil Diamond's tune made famous by The Monkees), slowed down to give the words weight and depth, making one feel that it's sung by someone who really does "believe" (plenty of soul in the final moments of the tune.)
There's pieces by David Byrne, Leonard Cohen, Dexy & The Midnight Runners, and others, all done with great care and thought.  Not each piece is totally successful but most are quite good, some downright brilliant.  There are moments that remind me of the music of Annie Lennox but, truly, "The Men I Love" is very enjoyable.  For more information, go to www.barbjungr.co.uk/. 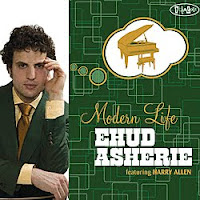 Modern Life - Ehud Asherie, featuring Harry Allen (Posi-Tone Records) - Young Israeli-born pianist Asherie, who's worked with saxophonists Grant Stewart and his guest here Harry Allen issues his 3rd CD for Posi-Tone and he continues to show why he's such a fine player.  He thinks "melody first" when choosing material, likes to swing, and his solos are usually smartly constructed.  Most of the tunes are standards (even fellow pianist Hank Jones' "Vignette" has been around since 1980) and the 2 originals show a "bop" pedigree.
The rhythm section of bassist Joel Forbes (a New Haven, CT native) and drummer Chuck Riggs give great support (and well-recorded) - listen to their relaxed swing on the pianist's "One for V" and how they supply the "motor" that drives "The Trolley Song." They remain calm and quiet underneath the "lead" voices on the Gershwin Brothers' "He Loves and She Loves" (from "Funny Face").
Allen continues to mine the styles of Ben Webster, Lester Young and Coelman Hawkins to great effect.  He never forces the musical "issue", playing with a relaxed sense of swing (so playful on "No Moon at All" yet deeply bluesy on Billy Strayhorn's "A Flower is a Lovesome Thing") and, like the pianist, always "on" the melody.
Ehud Asherie is an impressive pianist, not because he plays "tons of notes" - no, there's an ease, a grace, a melodic presence that informs his playing.  "Modern Life" is a gentle, genial, and pleasing program that will have listeners coming back time and again for its fine music.  For more information, go to www.posi-tone.com. 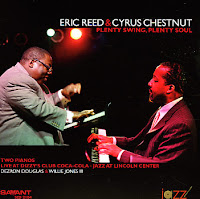 Plenty Swing, Plenty Soul - Eric Reed & Cyrus Chestnut (Savant) - Recorded live at Dizzy's Club Coca-Cola at Lincoln Center in New York City, Messrs. Reed and Chestnut play a program that exemplifies the CD's title.  Starting with a rousing version of "I'll Remember April", the pianists have a swell time playing these (mostly) standards (2 of the 7 tracks come from Reed, including the rousing and deeply bluesy title track.) With the support of young Hartford, CT, native Dezron Douglas (bass) and Willie Jones III (drums), the duo show their formidable "chops" but never to the point of self-indulgence.  Both strongly religious, they each have a "solo" track, Chestnut with a subdued yet sparkling reading of "Lift Ev'ry Voice and Sing" while Reed leads the rhythm section through a spirited reading his composition, "Prayer."
There's a lot of "history" in their playing, which one can hear in the lively reading of Dizzy Gillespie & John Lewis's "Two Bass Hit", a rendition that includes song "quotes", different keyboard techniques (stride, swing, a touch of barrelhouse) and a rhythm section that gives its all.
"Plenty Swing, Plenty Soul" is a most enjoyable aural experience, 70 minutes of good music.  The audience had a great time and it's easy to hear all 176 keys were well served.  For more information, go to www.jazzdepot.com. 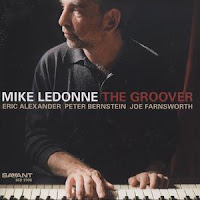 The Groover - Mike LeDonne (Savant) - As above, the title of this CD tells one most of what he or she needs to know. Couldn't ask for better sidemen, with the rich tenor sound of Eric Alexander, the straight-ahead drumming of Joe Farnsworth, and the clean, blues-inspired licks of Peter Bernstein.  LeDonne, better known as a pianist (Milt Jackson, Benny Golson and below), has played a Hammond B-3 since his teenage years and this recording shows his fine playing.  The sound of the music has an early 60's feel, Jimmys Smith and McGriff come to mind.  Most of the tunes are fairly new, with the exception of Lerner and Loewe's "On the Street Where You Live" - there's a new Benny Golson tune, "Little Mary", dedicated to LeDonne's 5-year old, and it's a bubbly sweet track with a loping rhythm. Alexander sounds relaxed throughout (he started his professional career as a member of organist Charles Earland's group) and, as usual, he avoids cliches in his solos. He lets loose on occasion, bouncing over Farnsworth's solid drumming.
The tune "The Groover" is dedicated to the late drummer Tony Reedus and swings with that joyous feel that player gave to music.  This CD does not knock you on your head but it's a fun ride from start to finish. To find out more, go to www.mikeledonne.com. 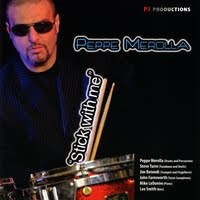 Stick With Me - Peppe Merolla (PJ Productions) - The spirit of hard-bop permeates this CD, the second by drummer/vocalist Merolla (he does not sing on this program.)  Utilizing the talents of Steve Turre (trombone, shells), Jim Rotondi (trumpet, flugelhorn), John Farnsworth (tenor sax), Mike LeDonne (piano) and Lee Smith (bass), Merolla romps, stomps, pounds, splashes, thumps, swings and dances through this music. 5 of the 9 tracks are from Farnsworth's pen and they allow the musicians to stretch out.  Yet, what's best about the disk is that there are very solid melodies on most tracks, not just riffs for all to blow through and over.  Turre's mystical shells opens "Naples", the first track on the CD and the only composition contributed by the leader. There's great propulsion in the rhythm section.  Highlights include "A Cry for Understanding", a Farnsworth piece that combines the influences of John Coltrane with Art Blakey.  Rotondi brings his sweet arrangement of Willie Nelson's "Crazy" to the session - it features bluesy solos from the saxophonist, Turre and LeDonne.  "Ferris Wheel" is a real burner, the solos riding atop Merolla's driving percussion.
If you dig "hard bop", you'll certainly enjoy "Stick With Me."  For more information, go to www.peppemerolla.com.
Posted by Richard B. Kamins at 4:15 PM