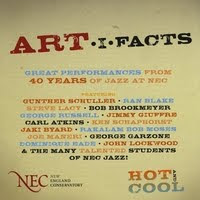 Artifacts: Great Performances from 40 Years of Jazz at NEC - Various Artists (New England Conservatory) -  The New England Conservatory of Music, located in Boston, MA, came into existence in 1867 and has been (pun intended) instrumental in the academic, performance and compositional development of thousands of students and teachers.  100 years after its founding, NEC President Gunther Schuller announced plans for the Department of Afro-American Music and Jazz Studies and, 2 years later, the school welcomed its first students.  Over the past 4 decades, teachers such as George Russell, Jaki Byard, Bob Brookmeyer, Jimmy Giuffre, Steve Lacy, George Garzone, Joe Maneri, Rakalam Bob Moses, Mick Goodrick, Ran Blake, Ken Schaphorst, and others have worked with students such as Marty Ehrlich, Fred Hersch, Roger Kellaway, John Medeski, Hankus Netsky, Don Byron, Frank London, Richie Barshay, Darcy James Argue and Noah Preminger (and that's just a smattering.)
To celebrate the anniversary, there have a slew of events in Boston and 8 days of concerts (March 20-27/2010) in New York City (click here to read more.)  And, the school has issued this fascinating compilation of l4 performances culled from hundreds of concerts.  The oldest is a 1973 performance of Scott Joplin's "Maple Leaf Rag" by the NEC Ragtime Ensemble, Gunther Schuller, conductor, and the newest is a student trio from 2008 honoring Jimmy Giuffre with a fine reading of his "The Train and the River" (the trio consists of tenor saxophonist Sam Decker, guitarist Will Graefe, and bassist Nate Therrien.) Along the way, there are 2 solo piano versions of Thelonious Monk's "'Round Midnight", the first from Jaki Byard (1975) and the second by Ran Blake (2004). Lacy plays a solo soprano saxophone version of Monk's "Thelonious" and the NEC Jazz Orchestra tackles Byard's "Aluminum Baby", a track that features noted alumnus Harvey Mason (drums). The Orchestra romps through Ken Schaphorst's "Making Lunch" with the composer conducting (and Malcolm Campbell on piano) while Brookmeyer leads the ensemble with his valve trombone on a lovely reading of his "Cameo." Russell leads the Jazz Big Band through a rousing version of his "All About Rosie."
The trio of George Garzone (tenor saxophone), John Lockwood (bass) and Rakalam Bob Moses  (drums) blazes its way through John Coltrane's "India" while vocalist Dominique Eade presents her "Go Gently to the Water" with guitarist Mick Goodrick and pianist Jed Wilson.
One of the most interesting pieces on the disk is "Zeibekiko", a 1976 recording of Joe Maneri (clarinet), Rebekah Zak (piano), Albin Zak (guitar) and Sophia Bilides (dumbek).  It's a traditional Greek dance and it's neat how Maneri weaves his keening, wailing, clarinet through the music. As a side note, Ms. Bilides is now a noted singer of traditional Greek music.
This is a lovely, loving and lively smorgasbord of performances that are more than just slabs of history but illustrate the timeliness of jazz.  Go to http://necmusic.edu/jazz40 to find out more about the recording, the school, and the concerts.
The title of the review is a reaction to an online discussion of the expense of jazz education engendered by several blog postings from saxophonist/critic/author Chris Kelsey (whose writing is always worth reading and whose music is very much his own - go to http://chriskelsey.com to find out more.)  The original posting is here and should give you pause.
Posted by Richard B. Kamins at 7:20 PM