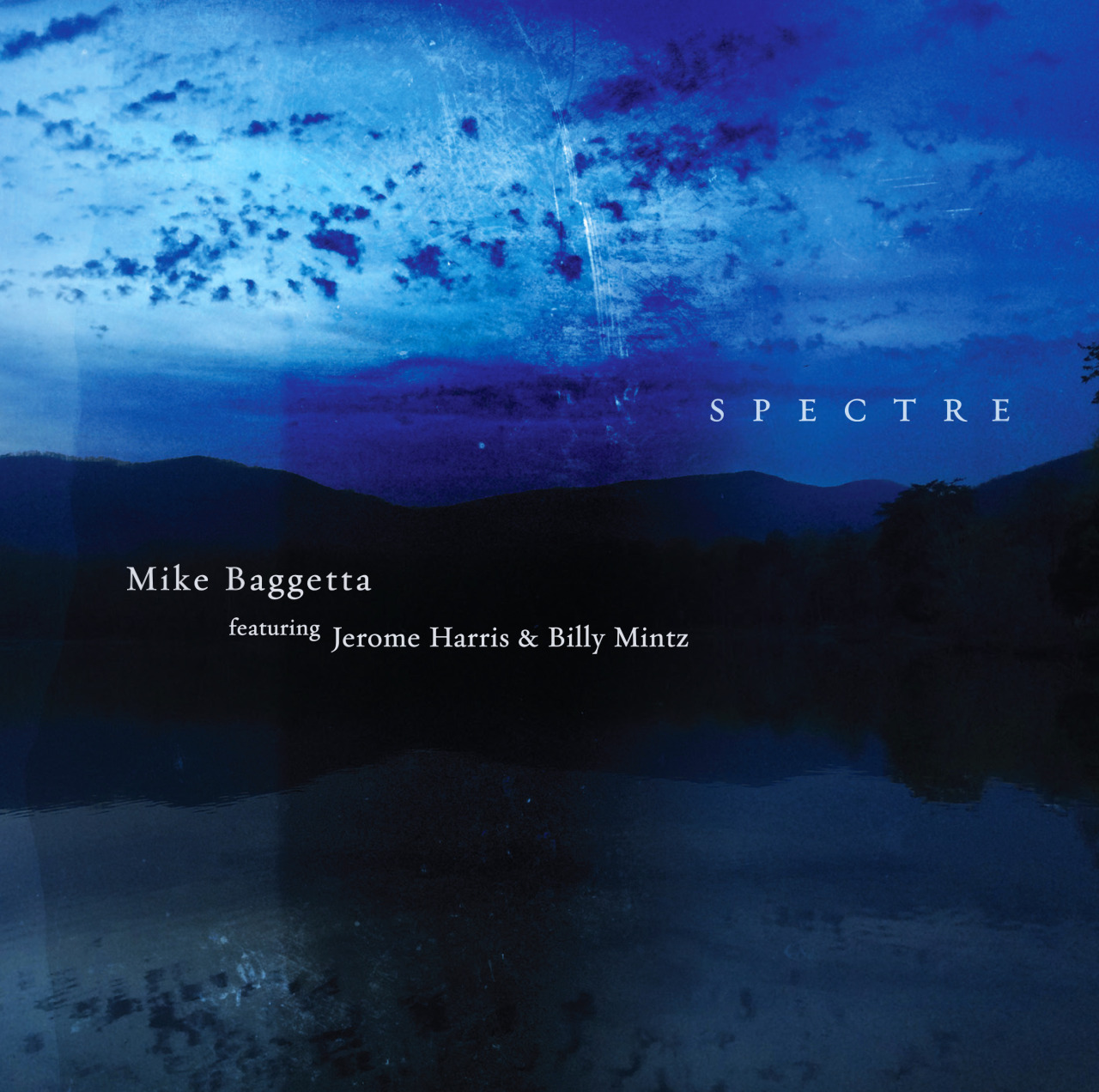 Having seen guitarist Mike Baggetta play in a solo setting, duo with trumpeter Kris Tiner in their TIN/BAG ensemble, and in his long-running quartet with saxophonist Jason Rigby, drummer George Schuller, and bassist Eivind Opsvik and Cameron Brown, I was excited to see "Spectre" (Fresh Sound New Talent) arrive as a trio date.  With the acoustic bass guitar sounds of Jerome Harris, the drum work of Billy Mintz, and the leader's guitars plus live processing, one would expect this music to go in many directions, and it certainly does. Five of the nine tracks are Baggetta originals, there is one track credited to all three ("Second Prelude", the opening cut), a heavy-metal inspired cut, "Nasty" composed by Mintz, Wayne Walker and Webb Pierce's country classic "Leavin' On Your Mind" (a big hit for Loretta Lynn in 1963), and Ornette Coleman's "War Orphans" (with versions recorded by Paul Motian, Bobo Stenson, and Charlie Haden's Liberation Music Orchestra.) With the exception of the afore-mentioned "Nasty" and the guitar solo on Baggetta's "The Only Blues", this music is often quiet, filled with pauses and silences, the three musicians interacting in the studio having a conversation that draws the listener in. A piece such as "Passage", a Baggetta original that stretches out for over 10 minutes, the looping guitar lines, the wonderful melodic work of Harris and Mintz's splendid brushes, keeps one involved all the way through.  The first few times, you wonder where it's going; when you return again, listen closely to how this music moves, how each player is important to the direction and the sound, and how just how well the guitarist integrates the electronics.

Don't confuse softer volume with lack of intensity when listening to this trio.  Baggetta's other-worldly sounds, with phrases that may remind some of the "bent" country sounds of Bill Frisell or the expressive Jeff Beck, blend well with the musicality of Harris and colorings of Mintz.  The three-part title suite sounds improvised, as does the majority of the album, but when you return to the music, a logic and sense of purpose appears.  The album closes with the Ornette Coleman work, the guitarist alone with looping, creating a stark yet emotionally rich atmosphere that makes "War Orphans" all the more poignant.

The dark blues of the album cover are a good signpost as to what to expect when one listens to "Spectre." There is a spaciousness to the music that one often feels as if he were standing on a mountain top surveying the universe.  Mike Baggetta turned to fellow guitarist David Torn for the mastering; his sense of sonic landscapes influences the project as each participant's sound is given equal weight as one falls under the spell of this music.  Dig in, dig deeply, and you will be moved, challenged, and ultimately satisfied.

For more information, go to mikebaggetta.com.

As a young person growing up in the Seattle, WA, area, trumpeter and composer Cuong Vu was greatly influenced by guitarist Pat Metheny. Vu spent several years in the early 2000s touring and recording with the guitarist's band. He has also worked with pianist Myra Melford, saxophonist Chris Speed, guitarist Joel Harrison and vocalist Laurie Anderson (among others). As a leader, Vu has recorded several albums for Knitting Factory and ArtistShare plus his Vu-Tet album on Origin Records. He's been working with the rhythm section of Stomu Takeishi (electric bass) and Ted Poor (drums) for over a decade (and three recordings), musicians who give as good as they get and more.

"Cuong Vu Trio Meets Pat Metheny" (Nonesuch Records) is a bit of a misnomer. This project does not feel like a "jam session"; instead, the seven tracks are a group effort.  Takeishi's fundamental bass lines, Poor's thrashing drums, Vu's forceful trumpet, and Methany's powerful guitar work seem like a natural fit. The program starts quietly, "Acid Kiss" arriving on a soft trumpet melody then slowly and steadily picks up in intensity, Vu's searing sound underpinned by squealing guitar, until the music seems to explode. Right near the end, the trumpet and guitar blend so closely the two musicians sound like one. There's plenty of fire on "Not Crazy (Just Giddy Upping)" with its post-modern electric/electronic bop.  Vu's trumpet solo moves up and down, in and out, reaching for sounds in the manner of the late Kenny Wheeler (especially reaching reaching for non-melodic sounds.) If you have followed Pat Metheny's music and career over the past 40+ years, you know how much he likes to experiment with sounds and textures.  His brass-like sounds on songs such as "Let's Get Back" or his wailing solo on "Tiny Little Pieces", the latter over the rampaging rhythm section, prove he's not rating on his laurels.  On the latter track, his feedback and loops play right into Vu's coarse, raspy, trumpet sound, as if they were inside each other's minds.  Metheny gets bluesy and references John McLaughlin during "Telescope" (his composition), moving from supple melodic runs to roaring flurries of notes.  Both he and Vu take it down a few notches for the handsome "Seeds of Doubt" the guitar flowing atop Poor's active drums and cymbals and Takeishi's spot-on counterpoint.

There are moments on "Cuong Vu Trio Meets Pat Metheny" when the listener is reminded of electric Miles Davis and how that trumpeter, especially in the live setting, really pushed his band to go further with the music.  Then, there are cuts such as "Tune Blues" (composed by saxophonist Andrew D'Angelo), where the quartet swings hard but with a bluesy flair, electronics aside (save for Metheny).  The music is a bit off-center, Poor pounding away with Takeishi keeps the rhythm moving forward.  You should actually listen to this recording several times in a row start to finish, concentrating on different musicians each time.  When you can stand back and let the sound fill the house, your room, or the car, even your headphones, this music has the power to take you far beyond the ordinary.

For more information, go to www.cuongvu.com.