"V" is Klein's eighth recording for Sunnyside Records (6th as leader) and is comprised of two suites plus two more songs.  The program opens with the three-part "Suite Indiana" which combines two original compositions and a fascinating rearrangement of Miles Davis's "Donna Lee."  The latter tune, made famous by Charlie Parker, has its melody spread among the brass and reeds and broken into rhythmic fragments.  That track is bookended by "Back Home Again" (with a melody line and arrangement reminiscent of Steve Reich) and "Patria Espiral" which expands upon the two previous melodies and rhythmic patterns.

The centerpiece of the album is the 34+ minute, seven-part, "Suite Jazmin." The music displays the versatility of the ensemble right from the opening seconds of "Symmetry I" as the composer spreads the melody lines throughout the band, from the versatile bassist Huergo to the reeds while Ballard moves from a martial beat to a modified swing.  "Si No Sabes 4/4" has a lilting melody plus a raucous solo from Monder and is immediately followed by "Si No Sabes 9/8" which takes the melody down a much different path inspired by the sensuous rhythms. "Burrito Hill Mirror" follows, its spiky rhythm created by the opening interactions of guitar and piano (mirroring each other) yet the handsome melody flows easily over the halting percussion (Nant and Ballard mirroring as well) whereas the following track, "Human Feel Mirror" is more upbeat, it's circular melodic fragments creating a percussive feel from the entire ensemble.  "Jazmin" is a lovely ballad with a striking melody line (played by Zenon and Cheek on soprano and echoed by the muted trumpets), lovely harmonies, and a fine solo from Cheek.  "Symmetry II (Si No Sabes Que No Sabes)" is a quiet reiteration of the beginning of the "Suite" as well as a charming close. 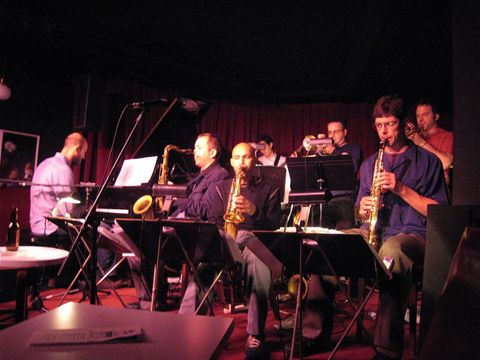 The album closes with "Ashes" (an Andrew Hill piece composed for the album "The Invisible Hand" that he recorded with Greg Osby and Jim Hall) and "Quemando Velas" (Burning Candles).  Both are ballads, the Hill composition retaining the spare quality of its original, a striking melody for flugelhorn with Klein's arrangement built right off the melody.  The latter piece begins immediately after the previous song, the melody carried by the alto and tenor saxophones but notice the echoes behind the front lines as well as Monder's shimmering accompaniment. The melody shifts to the brass, quietly pushed forward by percussion.  The delicacy of the music is matched by the emotional content, there's a feeling of peace and contentment as the song slowly concludes.

"V" is a work that demands your attention and rewards the listener many times over.  Like the previous recordings of Los Guachos, the seamless blend of melody with harmony, the way the Argentinean rhythms permeate so much of the music as well as the impressive ensemble arrangements, all those factors and more illustrate the artistry of Guillermo Klein.  Highly recommended!

For more information and to sample the album, go to sunnysidezone.com/album/los-guachos-v.

Composer, arranger, pianist and educator Andy Jaffe has had a career that spans over four decades and, like many people involved in the jazz world, much of that time has been spent in academia. He has taught at many universities and colleges in the Northeast but mostly at Williams College for the past 29 years.  Jaffe has co-led a large ensemble with trombonist and educator Bill Lowe (writer's note: Mr. Lowe's Jazz class was the first course I took at Wesleyan University on the road to my Master's Degree and, for a music reviewer, far from a "gut course") that, with the exception of two CDs, remains woefully under-recorded.

His new CD, "Andy Jaffe Nonet + 4: Arc" (Playscape Recordings) looks backwards even as it moves forward.  The impetus for the program came from a semester that he spent teaching and performing in Taiwan.  Played by an impressive ensemble that includes the reed section of Kris Allen (alto saxophone), Jimmy Greene (tenor and soprano saxes), Bruce Williamson (bass clarinet, soprano sax), and Tom Olin (tenor, soprano, and baritone saxes) plus the unorthodox brass section of Wallace Roney (trumpet) and John Clark (French horn). Besides the leader on piano and all arrangements, the rhythm section consists of his son Marty Jaffe (bass) and Jonathan Barber (drums).   The "4" alluded to in the album title is the Interesting Quartet from Taiwan composed of Wei-jun Hwang (first violin), Wei-hsin Liu (second violin), Chiee Yeh (viola) and Jiro Yeh (cello) who appear on four of the nine cuts.

The program features five new pieces, three composed in the 1980s and a forceful yet gracious performance of the spiritual "Go Down Moses" arranged for saxophone quartet.  On the spiritual, Williamson leads the way on soprano while the others reeds dance and weave below him (which may remind some of Julius Hemphill's arrangements for the World Saxophone Quartet).  Greene and Allen take short but powerful solos; still, the ensemble arrangement truly shines.  Of the "older pieces, two were composed for Max Roach's Double Quartet (which included the Unknown String Quartet).  Jaffe considered the great drummer/educator as a mentor and these powerful pieces, "Steve Biko" and "Theme for the New 60s" pay tribute to how Mr. Roach knew that his music needed to reflect the political issues facing the world.  The latter piece swings with a vengeance with strong solos from Roney, Allen, the leader and Barber.  "...Biko" also has excellent solo work (especially the fiery exchange between Williamson's bass clarinet and Clark's French horn but it's the powerful melody that stands out and how Jaffe's arrangement uses the strings to echo the melody, supply harmony as well as serve as counterpoint.

The album includes two lovely ballads, "In Case This Is Goodbye" and "Now Then", both new works.  The title of the former gives the piece its emotional foundation, the melody, colored by the strings and the deep sounds of the bass clarinet, its heart, and the soloists its true expression.  Allen's alto rises high above the rhythm section whereas the strings accompany the excellent soprano solo. Clark's solo is so understated but powerful while Marty Jaffe's bowed solo is pleasingly melodic. The strings return for the piano solo with an arrangement that leads back to the opening theme.  The album's final track, "Now Then", is lovely with fine percussion from Barber, sweet underpinning from the bass clarinet and other reeds while the French horn plays the theme and has the first solo.

Roney shines as a member of the ensemble plus his expressive set as a soloist. He fires on all cylinders on the highly-swinging "Brainworm" (Barber is the driving force here) and during a lengthy solo on "Fleurette Chinoise" (Greene's soprano solo on this track is wonderfully playful). Roney's muted solo and ensemble playing on the title track also stands out.

"Arc" is a collection of pieces that contain so many delightful elements, from melodies that sing in one's ears to arrangements that fill out the sound without cluttering the aural landscape to solos, many of them short, that are creative and direct.  Andy Jaffe Nonet + 4 is a long-awaited gem from this classy composer, arranger, and first-class pianist.

For more information, go to andyjaffe.com.
Posted by Richard B. Kamins at 12:16 PM