A pleasingly busy weekend of music in CT including 2 fine shows at The Side Door Jazz Club in Old Lyme.  On Friday (5/06), Jan & Ken welcome pianist Eldar Djangirov & his Trio. Eldar, born in the former Soviet Union but raised in Kansas City, Missouri, between playing professionally before he was a teenager.  He signed to Sony Records in 2005, releasing his 3rd CD at the age of 18 (his self-released debut came out when he was just 14).  A technically brilliant pianist, he has matured in a thoughtful musician with a great knowledge of many different genres.  He has also worked with saxophonist J.D. Allen on two of the tenor player's Savant releases.

Not sure who's in the rhythm section but, rest assured, this music will be fiery yet with finesse (check out the video below). Doors open at 7:30 p.m. and the music starts 60 minutes later.  Go to thesidedoorjazz.com for more information.

On Saturday, The Side Door opens for the David Gibson Quintet. Trombonist and composer Gibson, raised in Oklahoma, has been fairly busy since moving to New York City nearly two decades ago.  He's arranged, composed, and recorded with such artists as Slide Hampton, vocalist Nancy Wilson, the Dizzy Gillespie Alumni Band, Orrin Evans' Captain Black Big Band plus issued six albums as a leader, three on the Nagel-Heyer label and his most recent three  on Posi-Tone Records.

His latest CD, "Boom", came out early in 2015 and he's bringing most of the group that recorded that fine session with him to Old Lyme.  The rhythm sections consists of pianist Theo Hill, bassist Alex Claffey, and drummer Kush Abadey with trumpeter Freddie Hendrix joining Gibson in the all-brass front line. Everyone save for the trumpeter is featured on the recording (my review is here.)

The Quintet will play two sets commencing at 8:30 p.m.  For reservations and more information, call 860-434-0886.  To learn more about the trombonist, go to www.jazzbone.org.

Here's a tune from the latest CD to whet your appetite for Saturday night: 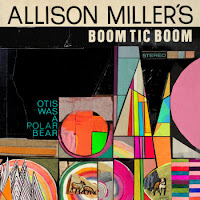 "Otis...", composed after the birth of the drummer's first child, is a splendid recording from start to finish.  While her previous recordings had their strengths (especially the interaction of the pianist and bassist with the drummer), the new recording expands the sonic palette with the addition of cornet and clarinet. Plus, having a baby has allowed the more melodic side of Ms. Miller as a composer to be front-and-center. Not that the music doesn't swing - there are moments of great intensity - but the overall effect is one of playfulness.

Here's a video about the making of the new album:

On Friday, the Hartford Jazz Society presents the great alto and soprano saxophonist Gary Bartz in concert at 7 p.m. in the Polish National Home, 60 Charter Oak Avenue in Hartford.  Bart, born in Baltimore, MD, is well-known for his work with McCoy Tyner and Miles Davis plus his works as a leader of the NTU Troop and his recordings for Fantasy Records. He had a period in the mid-to-late 1970s when he had commercial success but he's been playing his brand of post-Coltrane jazz for the past 3+ decades.

Not sure who's in his touring Quartet but, most likely, guitarist Paul Bollenback will be alongside Bartz on the bandstand. Opening the concert will be the Greater Hartford Academy of Jazz Ensemble I.  For more information, go to www.hartfordjazzsociety.com or call 860-242-6688. 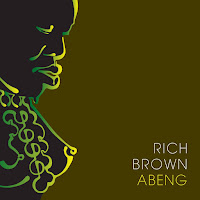 Canadian-born bassist and composer Rich Brown has a big, thick, electric sound that has been the foundation of bands led by pianist Andy Milne, saxophonists Steve Coleman, Steve Lehman, and Rudresh Mahanthappa.  "Abeng" is his second album as a leader and first with a band since he was the leader of Rinse The Algorithm in the mid-2000s.  The recording features Luis Deniz (alto saxophone), Larnell Lewis (drums), Robi Botos (piano on 4 tracks, Fender Rhodes on 1), Chris Donnelly (piano on 4 tracks), Kevin Turcotte (trumpet on 2 tracks), Kelly Jefferson (tenor saxophone on 1 track) and Rosendo Chendy Leon (all percussion on "Chant of the Exiled").

From the opening track, one can hear the influences of all the bands Brown has been part of.  The tricky rhythms of "Mahishmatish" has that M-Base feel of Steve Coleman while "Promessa" would sound just fine as part of Andy Milne's Dapp Theory. Yet, not all of the tracks are that easy to pin down.  "Chant of the Exiled (Abeng)" moves steadily forward on Leon's percussion while the melody is handled by the alto sax and trumpet.  The track never hurries; instead, the sensuous melody line is the focus.  The quiet acoustic piano melody of "This Lotus Ascension" also takes its time to develop, first unaccompanied then handed over to the bass and alto sax.  The music continually builds as Deniz pushes forward toward a fiery climax and, then, a quick piano interlude before returning to a re-statement of the main theme.

The shimmering opening of "Parity of Esteem (An Illustration of Imbalance)" illustrates not only the handsome melody but the impressive counterpoint provided by the leader. The piece turns turbulent in the middle, roiling piano phrases over the hypnotic bass and rampaging drums doesn't let up until the alto sax returns to the melody. The final cut, "Achilles & The Tortoise", is an exciting spotlight for Deniz (a Cuban native now living in Toronto, CA) and pianist Donnelly (1/3rd of Myriad3) who are constantly pushed forward by the aggressive drums and melodic bass. In fact, Brown takes a fine solo on the second half of the piece.

"Abeng" is music that comes at the listener from multiple perspectives, from the more contemporary edges of fusion to the funk experimentations of Weather Report and Yellowjackets.  One can hear the melodic influences of Jaco Pastorious and Jimmy Haslip on the sound of Rich Brown but he's no copycat.  This is music that's worth your attention - then go back and find his splendid 2014 solo bass album "Between Heaviness and Here."

For more information and to listen to the music, go to rinsethealgorithm.bandcamp.com.

Here's Rich Brown & The Abeng performing a tune from the album: