One of the joys of listening to pianist/composer Matthew Shipp is hearing how he incorporates the history of modern black music into the various ensembles he leads. His latest CD, "Root of Things" (Relative Pitch Records), features his Trio composed of the agile and highly musical bassist Michael Bisio plus the demonstrative, forceful and rhythmical drummer Whit Dickey.  This ensemble has logged many miles together, they listen intently to each other, and waste little time getting to the heart of the pianist's music.

The title track opens the program in a contemplative mode with Shipp stating the melody and Bisio offering counterpoint as well as harmony.  Dickey stays away from a steady beat concentrating on interacting with both partners.  "Jazz It" is notable for the "walking" bass lines, the boppish shuffle of the drums and the tolling piano chords.  As the piece unfolds, one can hear Dickey reacting to Shipp's left hand, the pianist's rolling lines moving in and out of the active rhythms and how the music changes direction after the bass solo, getting a bit more frisky for several minutes (Shipp's abstract piano lines roil instead of roll) and going back to a variation on the opening.

The sound quality on this recording helps each instrument stand out - on the ballad "Code J", each note that the pianist and bassist play is clear while Dickey's crisp cymbal work stands out.  Bisio's bowed bass opening of "Path" is engaging and engrossing, lasting over 5 minutes (with nary a dull moment) and leading into another ballad piece, led by Shipp's seemingly circular piano phrases.  The following track, "Pulse Code", is Dickey's spotlight, his forceful drumming leading to a short, "free", interaction for the Trio.  The program comes to a close with "Solid Circut" (sic); the piece opens with a piano solo that contains overtones of Bach and Beethoven with a dollop of blues - when the rhythm section enters, the music changes direction, displaying flavors of "Money Jungle" (Duke Ellington, Max Roach and Charles Mingus's 1963 recording), especially in the way the pianist challenges the bassist and drummer to explore the material without losing the ultimate direction of the piece.

The Matthew Shipp Trio creates "edge-of-your-seat" music, pieces that make you pay attention each time you listen.  And, each time you listen, one can hear how well the musicians interact, how this music never falls into cliche or seems stale, how it "swings" in its own way and flows unlike most other  contemporary music.  "Root Of Things" may be the best Shipp Trio recording and should make one want to see them live where this music really shines.  For more information, go to www.matthewshipp.com.

Pianist/composer Matt Newton, born in Ottawa, Ontario, Canada, started playing classical piano at the age of 7, moving to jazz several years later. By the age of 17, he was playing professionally. After attending the University of Toronto (where he studied with David Braid, among others), he began to work with numerous musicians including saxophonist Petr Cancura, multi-reed player Rob Mosher, trumpeter Kevin Turcotte and others.  His debut CD, "Push", was issued in 2009 and featured a quartet with Cancura, bassist Mark McIntyre and drummer Ethan Ardelli.  Ardelli is back for Newton's 2nd release, "Within Reach" (self released) and bassist Dan Fortin completes the ensemble.

The 8-song program (7 composed by Newton and 1 by Fortin) opens with the title track.  Newton displays a melodic side, not unlike Bill Evans but also with elements of Jimmy Webb and Burt Bacharach.  There is warmth in the melody and fire in the rhythm section.  "Crossway" goes in a different direction, led by the bassist's full-bodied sound with the pianist quietly beneath.  As the music progresses and falls into a medium tempo, the melodic interaction of Fortin and Newton stands out.  The pianist certainly has a fine touch, often quieter than one might expect, and he does not react to Ardelli's forceful drumming as much as ride atop the rhythms.  A variety of aural approaches highlight several of the tracks in the middle of the album.  "Our Own World" finds the pianist on Fender Rhodes, Ardelli pushing the 4/4 beat and guests Felicity Williams (wordless vocals) and Harley Card (electric guitar) - Newton works with them in the jazz/folk quartet Hobson's Choice -  the insistent rhythm and the constant crescendo in sound reminds one of certain pieces by the Pat Metheny Group. The following track, "Building The Ship", is a quiet ballad with the pianist playing high on the keyboard while softly whistling.  Fortin's contribution is "Ends", a tune that draws one in on the strength of the powerful percussion and handsome melody. Newton is alone on the final track, a lovely ballad titled "Claire-ity" that builds on an insistent figure in the left hand before closing on tranquil high notes.  The song runs just over 3 minutes but you'll want to hit repeat several times as its simplicity and beauty takes your breath away.

"Within Reach" speaks of possibilities in life, relationships, art, music, leading you in on the strength of the compositions and interactions of the trio.  Matt Newton is a young person who seems assured of his musical direction, who gives his rhythm section material that allows them to both support his efforts while expressing themselves.   One expects he is just beginning to reach his potential and it will be fun to see/hear where he goes.  For more information, go to www.mattnewton.ca. 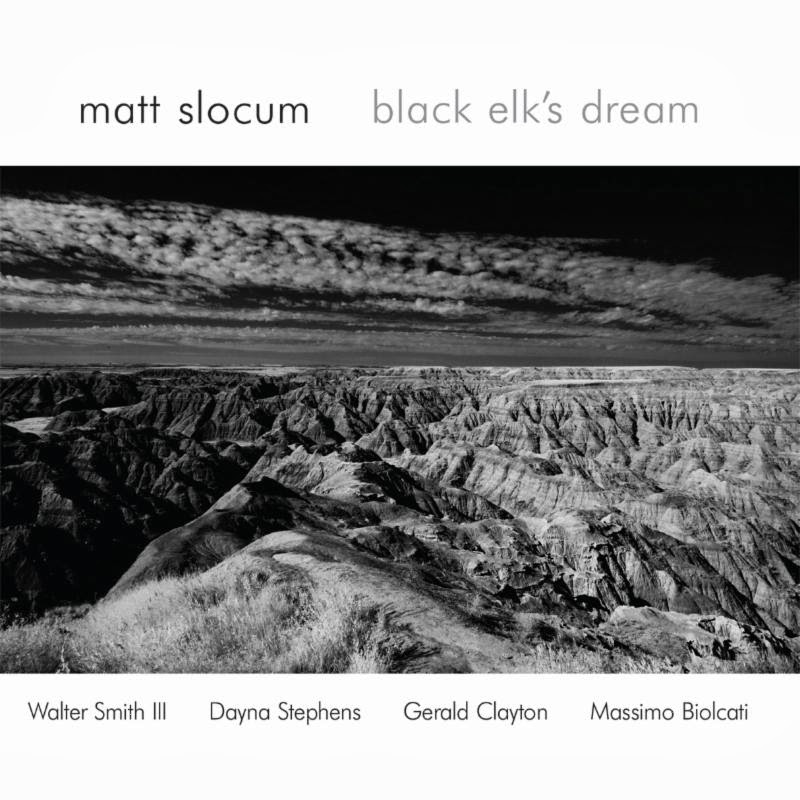 Drummer/composer Matt Slocum, a product of the Midwest who studied at USC with drummer Peter Erskine, has just issued his 3rd CD as a leader.  "Black Elk's Dream" (Chandra Records) is inspired by the writings of author John Neihardt, who brought the words and memories of Black Elk, a leader of the Oglala Sioux who survived the 1890 massacre at Wound Knee in South Dakota, to the greater public.

Slocum work here with the same rhythm section from his first 2 CDs, pianist Gerald Clayton and bassist Massimo Biolcati, as well as 2 of the 3 saxophonists who appeared on his debut "Portraits", Walter Smith III and Dayna Stephens. Smith III appears on 4 tracks, Stephens on 5 and the tenor players are both heard on "Black Hills."   While the project is influenced by the Native American experience, the music sounds influenced by the work of Charles Lloyd (especially his ECM recordings).  There is an openness to the audio, as if one was standing looking out over the Badlands National Park (as it appears on the cover.)  Gerald Clayton, whom I recently heard in concert with vocalist Nicky Schrire, is splendid throughout, always melodic, never substituting technical prowess in place of melody.  His introduction to "A Disappearing Path" is poetic; when the rest of the ensemble enters, Stephens overdubs 2 saxophones to fill out the main theme before launching into a strong solo.  Biolcati's counterpoint during the piano solo brings to mind the work of Charlie Haden while the leader dances on his cymbal. "Yerazel" gives Stephens plenty of room to develop an impressionistic solo, starting quietly and building ever so easily to a gentle climax. "A Blues" features Smith III, his warm tenor sax lines dancing over the highly rhythmical drum work, the piece resembling a romp by Sonny Rollins.  When the piano and bass enters, the song slows down but not Slocum's approach to his percussion, gradually pushing the group back up to the speed of the opening section. "Days of Peace" also features Smith III and also has a blues structure, with a steady walking bass line and splendid brush work.  The tenor solo is so mellow, working well against Clayton's solid chords and rumbling lines.

There are 3 short tracks (#s 4, 8 and 12), the latter 2 being works for solo piano. The first, "A Dream Revisited", is introspective with hints of light while the second, "End of a Dream", serves as a fitting epilogue to the project.

"Black Elk's Dream" is dream-like in the sense that the power of the music lies in the well-developed melodies, in the poetic interactions of the rhythm section and in the breathiness of the tenor playing.  While one can hear Matt Slocum is an intelligent and intense drummer, he's more interested in telling a story than displaying his "chops."  His familiarity with the styles of his fellow musicians breeds freedom instead of predictability as he gives them space and structure to work with.  Open the windows (weather permitting), turn up the speakers and let this powerful yet subtle music work on your soul.
For more information, go to mattslocumjazz.bandcamp.com/ where you can hear as well as buy the music and find a link to the drummer's website.
Posted by Richard B. Kamins at 10:36 PM